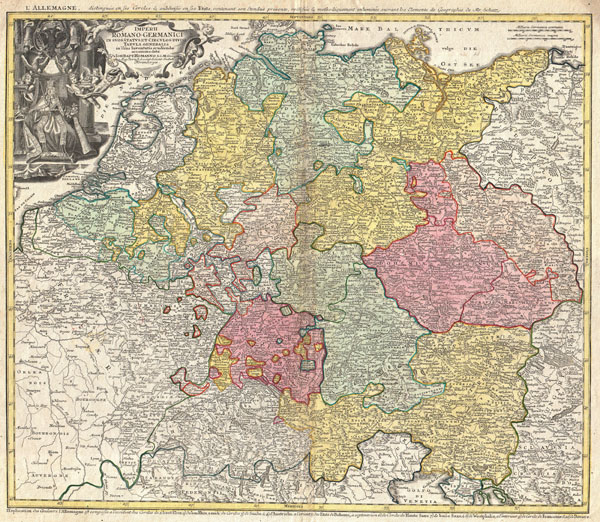 A beautifully detailed c. 1740 J. B. Homann map of those parts of Europe dominated by the Holy Roman Empire or the German Empire. Depicts most of central Europe from the Netherlands eastward as far as Poland and Hungary and as far south as northern Italy and the Gulf of Venice. Elaborate title cartouche in the upper left quadrant features the Emperor surrounded by angels and heraldic symbols. Map scales in upper right hand quadrant. Key to color coding outside border on lower margin. Alternative title in French in top margin, L' Allemagne, distinguee en ses Cercles & subdivisee en ses Etats, contenant ... los Elements de Geographiae de Mr. Shatz. This map was drawn in Nuremberg by J. B. Homann and included in the 1752 Homann Heirs Maior Atlas Scholasticus ex Triginta Sex Generalibus et Specialibus…. .

Stanford University, Map Collection, Germany 0284 a.
Looking for a high-resolution scan of this?