1725 Homann Map of the Turkish Empire 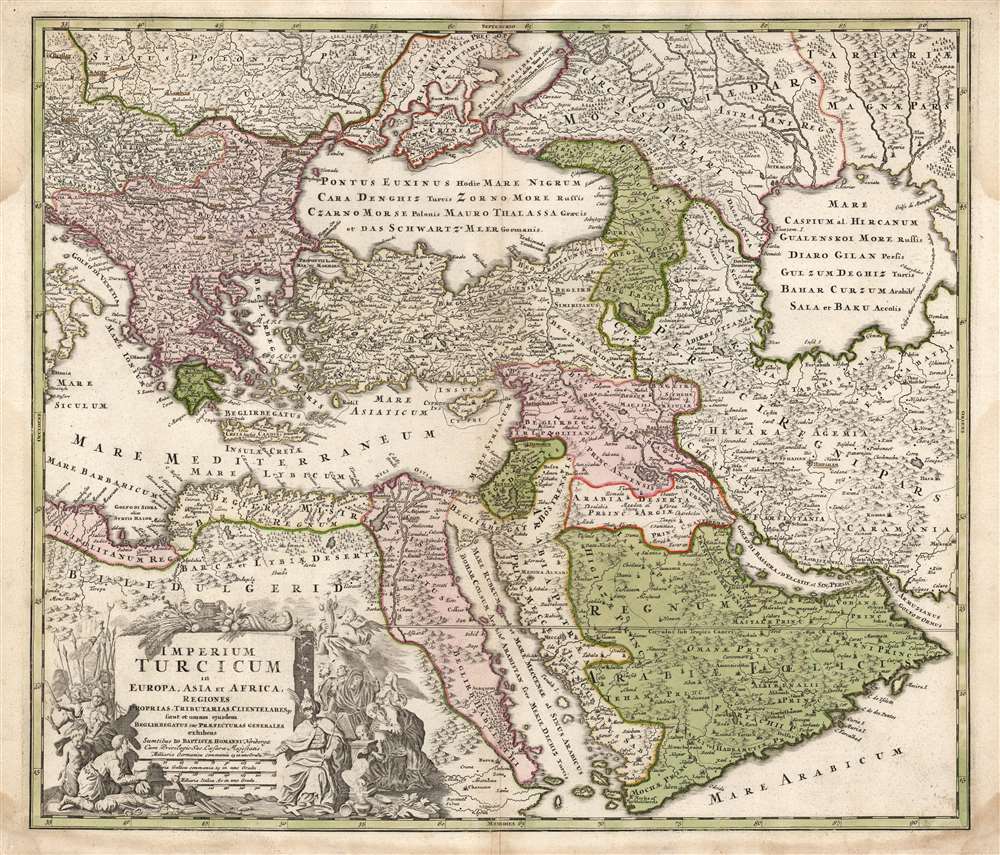 1725 Homann Map of the Turkish Empire

Bellicose Depiction of the Turkish Empire.
$850.00

This is a handsome example of the J. B. Homann 1725 map of the Turkish Empire in Europe, Asia and Africa. It shows the extent of the Ottoman Empire encompassing \the Arabian Peninsula, as well as the coastal parts of the empire in North Africa and Egypt. The border with the Persia is shown in the east, along with a considerable part of what is today Iran and Central Asia. The empire's contentious border in Europe, abutting Hungary, Transylvania, and Poland, is also shown. The area north of the Black Sea shows both Tatar territories and those of Muscovy on the Turkish frontier.

The cartouche, staged around a massive plinth bearing the map's title and scales, portrays the Turkish Empire in a blatantly negative light: unsurprising given the map's 18th century, Catholic source, and the long history of war between the west and east. Seated to the right of the plinth is the Ottoman Sultan; incense burners are set around him, and he treads a crucifix underfoot. Behind him, his courtiers make obeisance. In the background, a horned and winged figure presents a group of Ottomans with a turbaned statue - meant to be an idol representing Mohammed, showing a gross misunderstanding, as well as a blasphemous denigration of the role of the Prophet in Islam. On the other side of the cartouche, a crowd of Turkish soldiers drive forward two miserable prisoners to grovel before the Sultan (whose hand gestures them down.)

Most maps of the eastern parts of this region produced in the 16th and 17th centuries followed the model of Claudius Ptolemy in showing the Caspian Sea as oval-shaped, widest on its east-west axis with the ancient Oxus, or Amu Darya river, flowing into its southeast quarter. The first map to correct this was that of Adam Olearius (1603 - 1671), whose 1647 map much more accurately mapped the Caspian's western shore, and was first to diverge from the Ptolemaic oval form. Cantelli's 1679 map of the Persian Empire adopted Olearius, suggesting the eastern extent of the Caspian as shown here may actually be the shores of the Aral Sea. The Turkic tribal population surrounding the Caspian and Aral regions were notoriously aggressive to outsiders, and Europeans would remain ignorant of the true form of the Caspian until well into the 18th century. It is very possible that the early, wide depiction of the Caspian represented a conflation of the Caspian and the Aral Seas.

The terminology for the Persian Gulf used here - 'Golfo di Bassora' and 'Golfo d'Elcatif' - also betrays this region's source as the Italian Cantelli; likewise the naming of Bahrain both a city on the mainland, 'Bahruin,' and an island, 'Baeren I.' Cantelli's influence can also be seen in Homann's depiction of the Maeotian Swamp north of the Black Sea (this also appeared in earlier maps, for example those of Sanson, but the shape here reveals Cantelli as the source.)

We identify several different versions of this map. One, as early as 1702 but probably closer to 1714 lacks the Imperial privilege, and bears the imprint in the cartouche of the engraver, J. C. Steinberger. It is notable geographically for its enlarged Caspian Sea, following the Cantelli model. A further state of this plate, at a minimum, exists, probably printed between 1725 and 1730 after the death of Homann but before the establishment of Homann's Heirs. It shows reengraving, particularly of the cartouche, to the extent of the erasure of the Steinberger imprint (traces of which can be seen.) In 1737 Homann Heirs engraved an entirely new plate, using the same title (including the imprint of the elder Homann, who never lived to see the map.) While the elements within the cartouche are the same, the execution of them is quite different; geographically, the map is entirely new, being derived from the work of De l'Isle and J. M. Hase. It is dated '1737' in the upper margin.

The present example is (absent the discovery of further states) the second, with the erased Steinberger imprint.