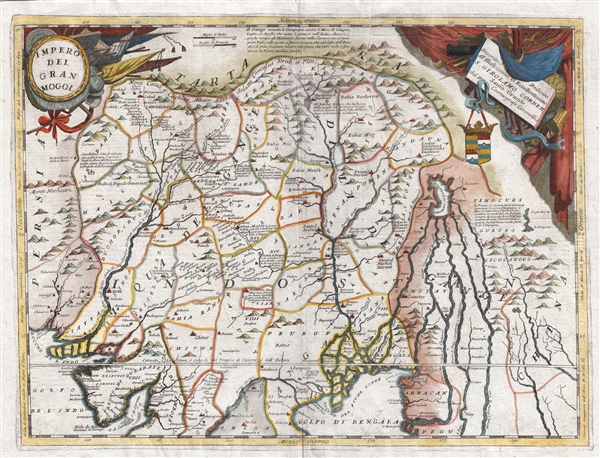 A colorful example of Vincenzo Coronelli's 1691 map of the Mughal Empire under the Emperor Aurangzeb Alamgir (1618 – 1707). The map covers what is today Northern India, as well as parts of Pakistan, Bangladesh, Nepal, Bhutan, Burma, and Thailand. It extends from the Himalayas to the Bay of Bengal and from the Indus Valley to the Mekong River. Cartographically this map is derived from earlier Dutch maps by Jannson, Blaeu, and Hondius.

Coronelli offers a striking depiction of the apocryphal Lake of Chiamay appears just north of the Bay of Bengal as the source of four important Southeast Asian river systems including the Irrawaddy, the Dharla, the Chao Phraya, and the Brahmaputra. The curious Lake of Chiamay (also called Chiam-may or Chian-may), roughly located in the area of Assam but sometimes as far north as Tibet and China, began to appear in maps of this region as early as the 16th century and persisted well into the mid 18th century. Its origins are unknown but may originate in a lost 16th century geography prepared by the Portuguese scholar Jao de Barros. It was speculated to be the source of five important Southeast Asian River systems and was mentioned in the journals of Sven Hedin. There are even records that the King of Siam led an invasionary force to take control of the lake in the 16th century. Nonetheless, the theory of Lake Chiamay was ultimately disproved and it disappeared from maps entirely by the 1760s.

This map was drawn and engraved by Cornelli for his inclusion in the 1691 Atlante Veneto.