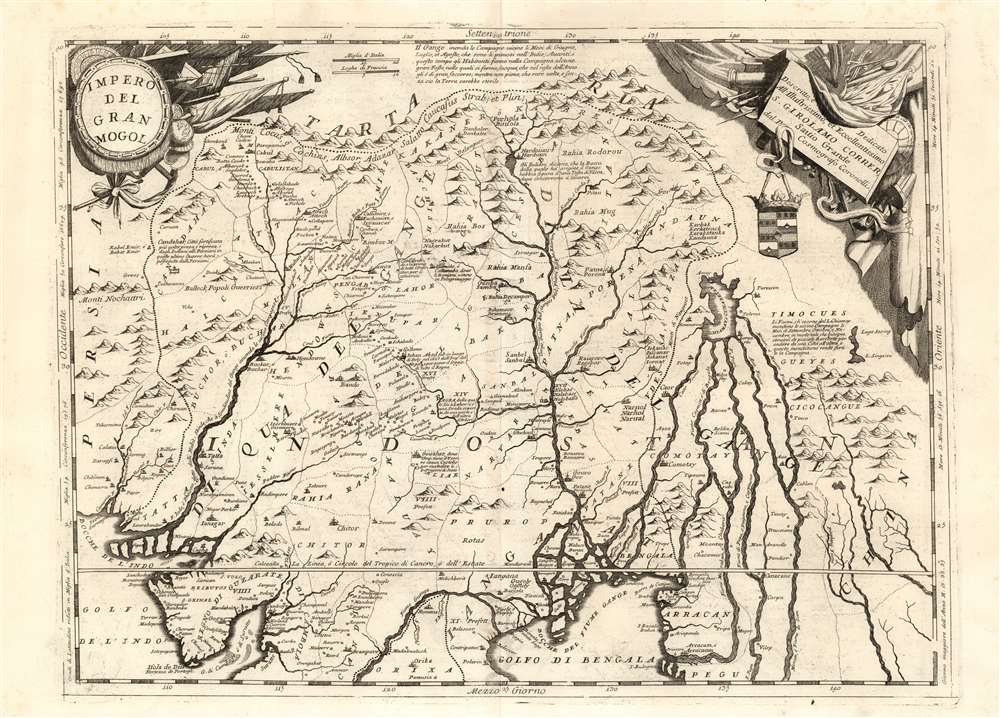 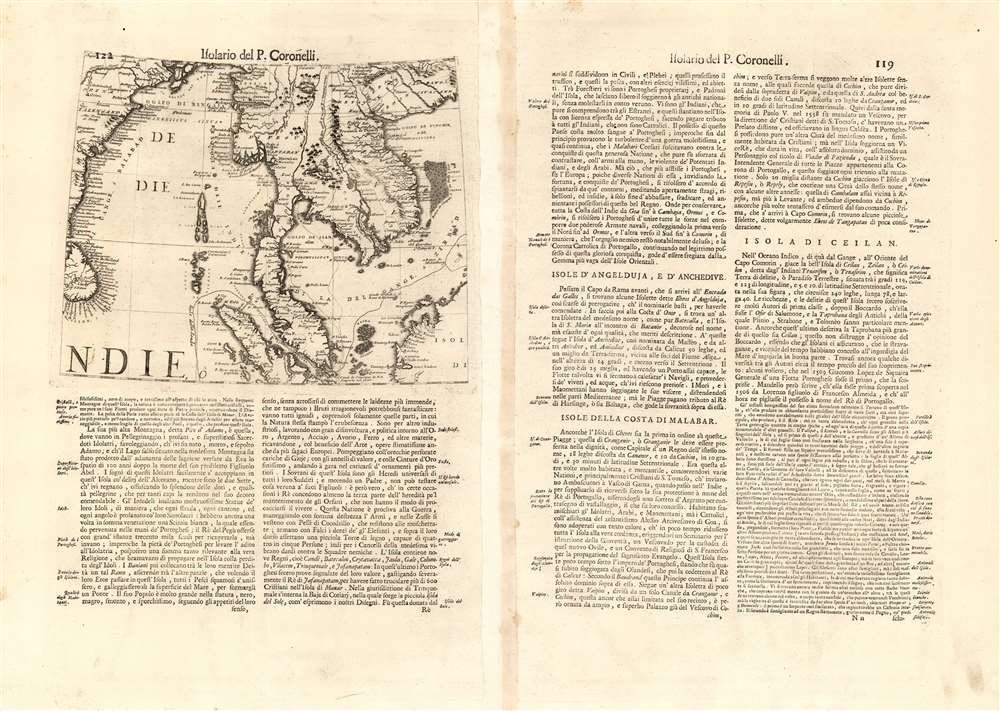 This is Vincenzo Maria Coronelli's large 1691 map of India under Mughal Empire during the rule of Emperor Aurangzeb Alamgir (1618 - 1707). The map is a step beyond most maps of this region in the 17th century, most of which are derivative of the 1619 Baffin map of the Mogul Empire. This map depicts what is today Northern India, as well as parts of Pakistan, Bangladesh, Nepal, Bhutan, Burma, and Thailand. It extends from the Himalayas to the Bay of Bengal and from the Indus Valley to the Mekong River.

Many of Coronelli's maps were derived from the geographical information that appeared on his globes - notably his 1688 42-inch terrestrial globe. This map is able to offer more detail than what can be found on either of the two globe gores that encompass this region.

The mythical Lake of Chiamay, or Chiang Mai, appears at the western extreme of the map, roughly in what is today Assam, India. Early cartographers postulated that such a lake must exist to source the four important Southeast Asian river systems: the Irrawaddy, the Dharla, the Chao Phraya, and the Brahmaputra. This lake began to appear in maps of Asia as early as the 16th century and persisted well into the mid-18th century. Its origins are unknown but may originate in a lost 16th century geography prepared by the Portuguese scholar Joao de Barros. It was also heavily discussed in the journals of Sven Hedin, who believed it to be associated with Indian legend that a sacred lake, Mansarovar, linked several of the holy subcontinent river systems. There are even records that the King of Siam led an invasionary force to take control of the lake in the 16th century. Nonetheless, the theory of Lake Chiamay was ultimately disproved and it disappeared from maps entirely by the 1760s.

Susan Gole sniffs disapprovingly at Coronelli's map: 'Coronelli published two very decorative maps of the subcontinent, which are more pleasing to the artist's eye than the geographer's...' and the map, as is typical of the work of Coronelli's shop, is beautifully engraved. The interior topography differs from the Baffin model which dominated the 17th century.

On the verso of the map, amongst the Italian text, is a masked-off portion of the globe gore from the 1688 terrestrial globe showing Sri Lanka, The Malay Peninsula, Siam, and Cochinchina.

The map was engraved for inclusion in Coronelli's 1692 Corso Geografico Universale, and was thereafter included in his Isolario, generally included as part of his Atlante Veneto. There are only six examples of the separate map listed in OCLC. Coronelli's Isolario is, however, well represented in institutional collections.

Coronelli, Vincento. Atlante Veneto, (Venice) 1697.     The Atlante Veneto was a Venetian cosmographic atlas issued by the Jesuit Minorite friar, geographer, and globe maker Vincenzo Maria Coronelli. The Atlante Veneto was a massive work consisting of some 13 volumes in four parts. The first section focused on a general introduction to geography and included notes a various geographic systems and globes. The second part consisted of world maps from various periods and in various styles, including double page maps of the continents and poles derived from his earlier globe work. The third part focused on hydrography and included nautically styled maps of important rivers, bays, oceans, lakes, and gulfs. The fourth and final section detailed exploration and describing noting various explorers and their discoveries. The whole consisted of some 191 engraved charts and maps as well as an assortment of views and decorative plates. The atlas was conceived as a continuation of Blaeu's Atlas Major and in many respects follows Blaeu cartographically. Many of the other maps are derived from Coronelli's own earlier globe work and exhibit various distinctly globe-like elements. Coronelli first issued the Atlante Veneto in 1691. A second edition was prepared and issued between 1695 and 1697. Most of the individual map plates remain identical between editions. The maps of the Atlante Veneto are universally admired for their exquisite engraving and high production quality, including fine paper and premium inks. All examples were issued uncolored and have typically been left as such by dealers and collectors.