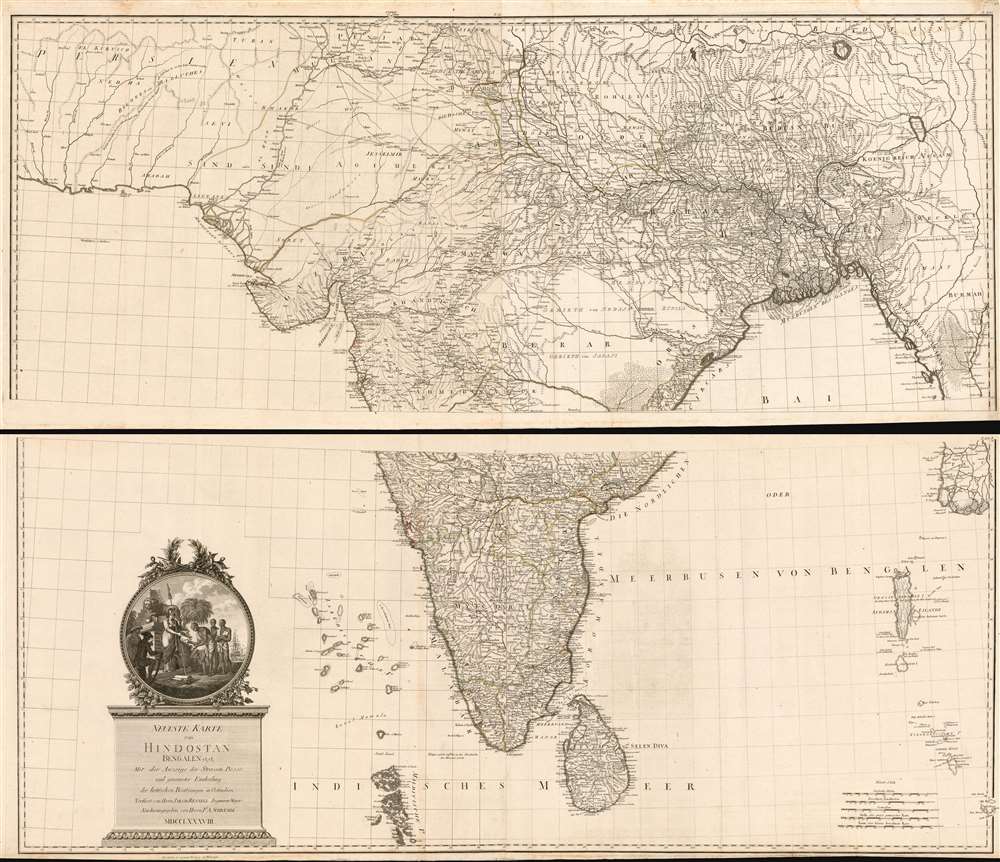 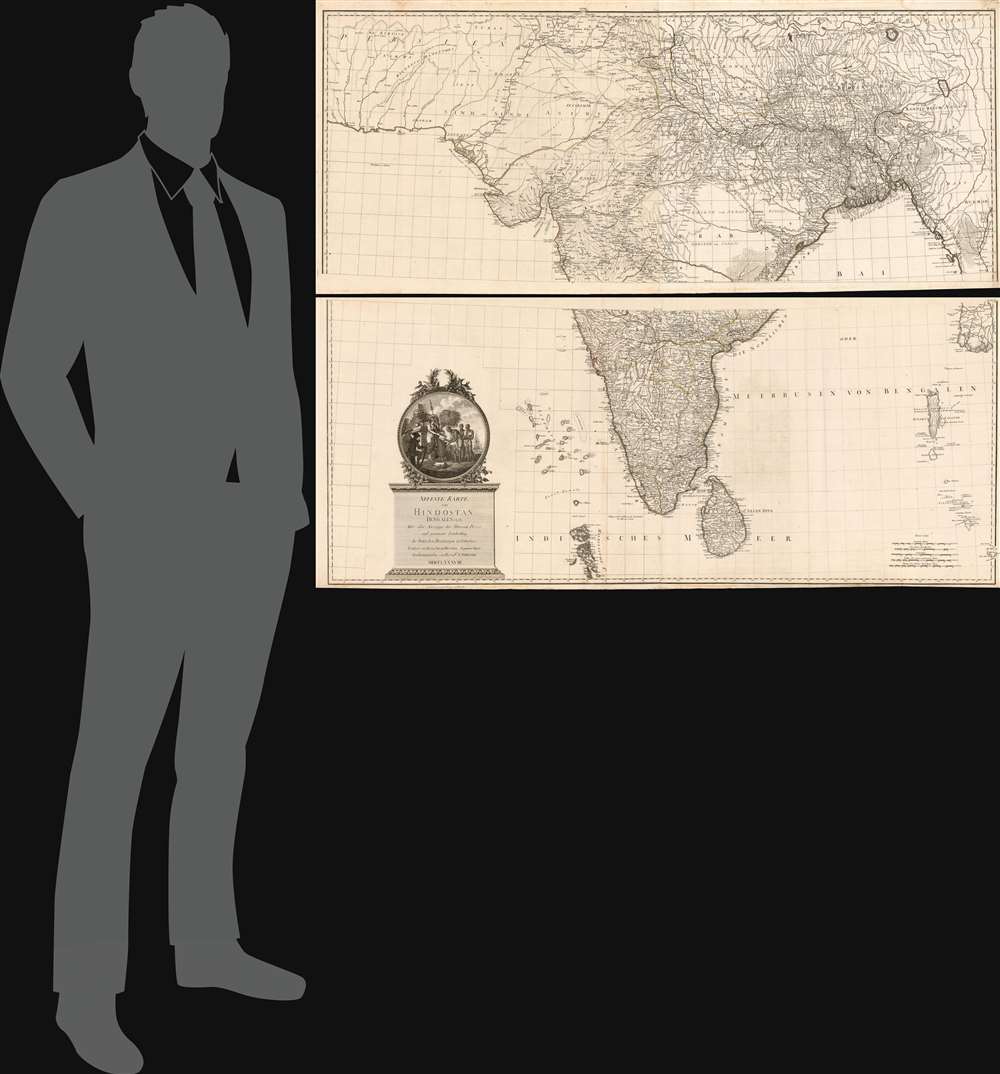 This is Franz Anton Schrämbl's 1788 map of India. This scarce, magnificently engraved map is a faithful rendition of the illustrious James Rennell's masterful 1782 Map of Hindoostan, the finest 18th century map of the subcontinent, capturing the best surveys of India available during the period in which the British East India Company held sway. Rennell's work, based on the first scientific surveys of India, presented the region in a matchless degree of detail. By adopting this map as his source, Schrämbl was choosing the absolute state-of-the-art of India mapping. One of the first Austrian world atlases, Schrämbl's Allgemeiner Grosser Atlas presented the works of the best cartographers of the day: D'Anville, Kitchin, the Berlin Academy of Sciences, and the St. Petersburg Academy of Sciences all shared the pages of this monumental work with Rennell.

A Vital Tool of Colonialism

The map produced by the EIC utilized the best techniques of trigonometrical, military, and topological surveying available. The unprecedented detail was much sought after, as rival European powers - at this point, primarily the British and the French - vied over land claims in India, dividing the region and extracting revenue. Maps of this quality were essential not only for military affairs, but also for administration. Rennell's map, which was the first map of India based on physical surveys rather than anecdotes, would have been considered essential.

Schrämbl's map is faithful not only to the cartography but to the iconography as well: the beautiful cartouche is a close copy. With a pedestal of British Victory behind her, a helmeted and armed Britannia is depicted in the process of bestowing upon Hindu Brahmins a book, as Sepoys, (Indian soldiers in service to Britain,) look on. The book is labeled Shaster, a transliteration of 'Shastra, a Sanskrit word meaning 'precepts' or 'rules' - a glimpse of what would often be the British patriarchal justification for their rule in India as it passed from the EIC to the crown.

Schrämbl executed this masterful edition of Rennell's Map of Hindoostan in 1788, and included the map's four sheets - joined in pairs, as here - in his Allgemeiner Grosser Atlas in 1800. OCLC notes the separate map cataloged in only ten institutional collections. The complete atlas appears only in three, the Staatsbibliothek Zu Berlin, the Institut Fuer Laender Bunde, and the Universiteit Leiden.


James Rennell (December 3, 1742 - March 29, 1830) was an English geographer, historian and seminal oceanographer, known as 'the Father of Indian Geography'. He would become, in 1830, one of the founders of the Royal Geographical Society in London. Rennell was born near Chudleigh in Devon, England. At 14 he joined the British Navy as a midshipman and served in the Seven Years' War. During his time in the Navy he mastered marine surveying; when his ship, HMS Grafton, saw service in India, he began lending his services to the East India company, accompanying hydrographer Alexander Dalrymple and drawing charts between 1759 and 1764. Following the Seven Years' War, seeing no prospect of advancement in the Navy he left the navy and joined the British East India company's sea service, where he continued survey work. Eventually he would be commissioned with the Bengal Engineers, and his surveys in India proper began in earnest. He would become surveyor-general for the EIC in Bengal, remaining in service until 1777. He would retire from active duty with the rank of Major in the Bengal Engineers. From London, he published extensively: his 1779 Bengal Atlas, and his 1783 map of India set the standard for the mapping of the subcontinent. He set his career to paper in the 1788 book Memoir of a map of Hindoostan. Learn More...

Very good condition. A few minor marginal mends; margin reinstated to one corner. Measurements represent the total dimensions of the map, as if joined. Currently unjoined, as issued, can be joined as a wall map upon request for an additional fee.