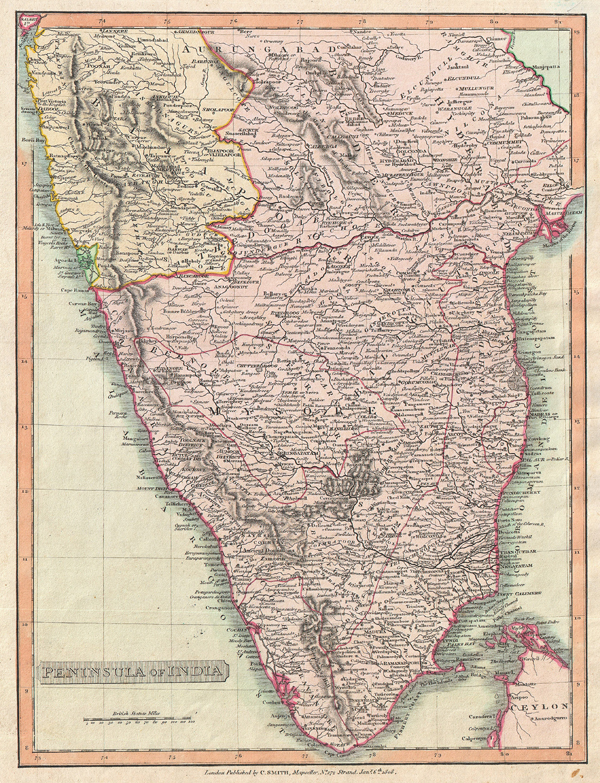 This is an attractive 1808 map of India by English map publisher Charles Smith. Covers the subcontinent from Bombay (Mumbai) south to include parts of Ceylon (Sri Lanka). Highly detailed. Based on the Faden map of 1793. Divided according to the Princely States as they existed at this time. Predates the British Raj. Most likely engraved by E. Jones for Smith's 1808 issued of the New General Atlas…

Charles Smith (1768 - 1854) was 19th century British publisher of maps, atlases, and charts, most of which focused on England and London. Smith was appointed map seller to the Prince of Wales in 1809. His early work stylistically resembles the work of Pinkerton, Cary, and Thomson, though on a much smaller scale. From 1826 to 1854 the business traded as Charles Smith and Son. After Charles Smith's death in 1852 the it was taken over by his son William Smith, and later his grandson Guildford Smith (1838 - 1917), who continued to publish maps well into the 20th century. The younger Smith is best known for his introduction of the 'Tape Indicator Map'. This map, which came with a tape measure, enabled users to triangulate their location based coordinates given in an attached guide. The firm was taken over by George Philip in 1916.