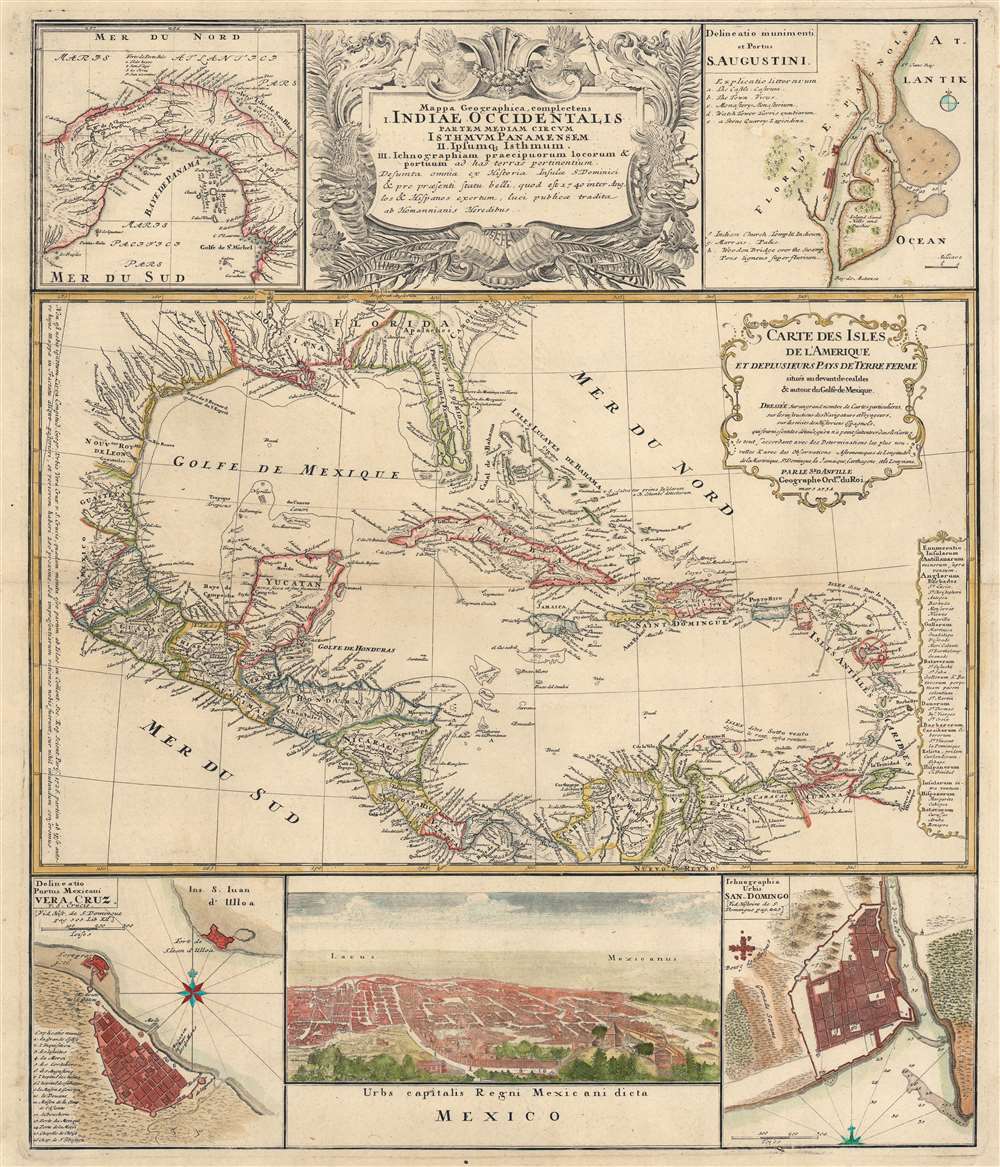 This is a 1740 Homann Heirs map of Florida, the West Indies, and Central America, published to highlight the major theater of conflict during the War of Jenkins' Ear. It is based upon the cartography of Jean Baptiste Bourguignon d'Anville, but features several relevant maps compiled into a single sheet.

The central map, attributed to D'Anville's 1731 work (one of the most state-of-the-art maps of the region then available), depicts the West Indies from Mexico to the Lesser Antilles including the totality of Florida, parts of Carolina, and parts of northern South America. Southern Florida, in an attempted rendering of the Everglades, appears as a series of lakes and islands connected by narrow canals. New Orleans and the mouths of the Mississippi are illustrated with relative accuracy, as are Mexico and the West India Islands. Territories throughout the region are color coded according to which colonial powers ruled them.

Five smaller maps occupy the portions of the sheet above and below the central map. Those along the top depict the Bay and Isthmus of Panama at top left and an excellent depiction of the port of St. Augustine, Florida at top right, which is one of the earliest obtainable depictions of a harbor in Florida. The insets along the bottom border include, from bottom left, an inset plan of the city and harbor of Veracruz, Mexico, a splendid view of Mexico City, Mexico, at center, and a plan of the city and harbor of San-Domingo in the bottom right. The top center is adorned by a marvelous floral title cartouche depicting two Amerindians wearing elaborate feather headdresses and holding serrated spears.

The War of Jenkins' Ear

The War of Jenkins' Ear (October 22, 1739 - October 18, 1748) was fought between Britain and Spain and is known in Spain as the Guerra del Asiento. Fought over trade (slave trade), the stated cause of war was that Spain considering withdrawing from the 'lucrative' asiento signed between the two countries granting Britain limited trading rights in Spanish America. It became known as the War of Jenkins' Ear over one hundred years after the fighting began when historian and essayist Thomas Carlyle referred to the war by that name in is 1859 work History of Friedrich II. Robert Jenkins was the captain of the British brig Rebecca which the Spanish 'coast guard' boarded in 1731 in the Caribbean on suspicion of smuggling. The Spanish commander cut off Jenkins' left ear during the incident. The event drew widespread British attention and ire in 1738 as an 'insult to British honor' and a cause for war. The British and Spanish fought in the Caribbean from 1739 through 1742, when the War of the Austrian Succession (1740 - 1748) demanded Spanish and British attention and the desire to fight in the Caribbean waned. The War of Jenkins' Ear ended with the same treaty that ended the War of the Austrian Succession, the 1748 Treaty of Aix-la-Chapelle.

This map was compiled and published by Homann Heirs in 1740. It is well represented in institutional collections.

Kapp, Kit S., 'The Early Maps of Panama up to 1865', Map Collectors Circle, Issue 73, no. 58. Lowery, Woodbury, The Lowery Collection: A Descriptive List of Maps of the Spanish Possessions within the Present Limits of the United States, 1502 - 1820, 360.
Looking for a high-resolution scan of this?