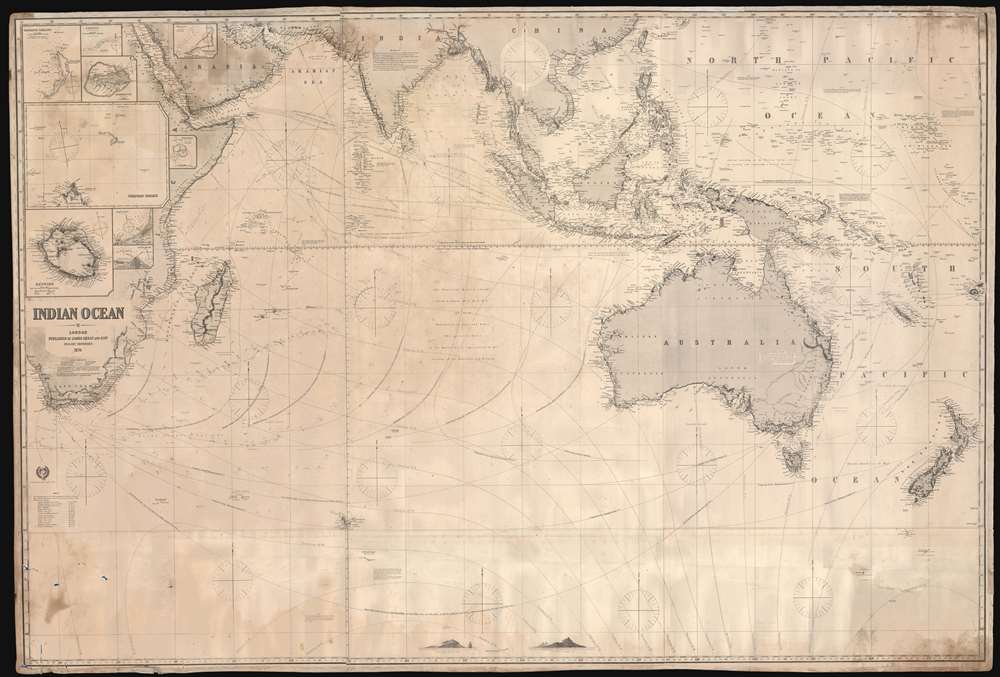 This is a gigantic 1874 James Imray and Son blueback working nautical chart or maritime map of the Indian Ocean covered in manuscript notations. The map depicts the world from East Africa to Fiji and from Taiwan and the Persian Gulf to 60 degrees south latitude. Manuscript pencil notations trace at least three, possibly four, voyages across the Indian Ocean. These notations mark the vessel's location on its trip across the ocean and notes what is most likely the day of the expedition. Apart from these four voyages, numerous routes between various points throughout the region are also illustrated, with a particular concentration running from the Gulf of Aden to the East Indies, frequented trade routes between England and the Netherlands and these colonies rich in natural resources. Myriad locations are identified throughout, particularly along the coastlines and small islands making up parts of archipelagos situated throughout the Pacific Ocean and the China Sea. Eight inset maps are situated on the map's left side and illustrate Cargados Carajos, Coetivy, Rodrigues, Wood Island, Farquhar Passage, Tromelin, Réunion, and the cities of Saint Paul and Saint Denis on Réunion.

This chart was created and published by James Imray and Son in 1874. No examples of the 1874 edition of this chart are cataloged in the OCLC and we are aware of only one example of the 1874 edition that has entered the private market. Examples of other editions are part of institutional collections. An example of the 1877 edition is part of the collections of the Royal Museums Greenwich and an empty OCLC reference is cataloged for the 1875 edition.