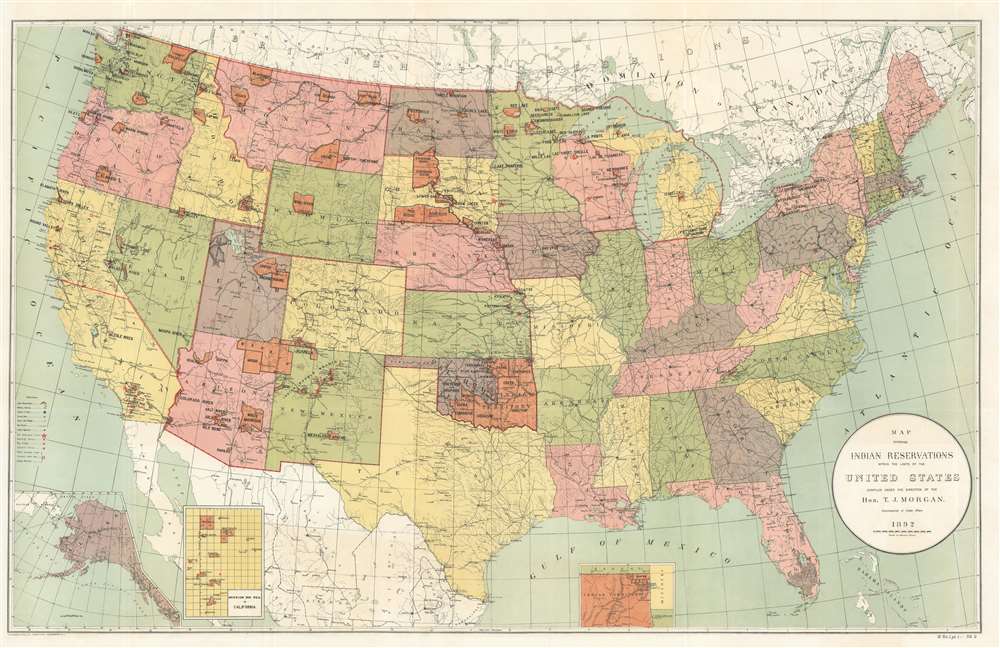 Illustrates the ephemeral period when there was an Oklahoma Territory and an Indian Territory vying for statehood.

This is an 1892 Thomas Jefferson Morgan map of the United States showing Indian reservations. The map depicts the country from the Pacific Ocean to the Atlantic Ocean and from Canada to Mexico and the Gulf of Mexico. Indian reservations throughout the country are highlighted in orange and labeled in block lettering. Indian boarding schools, day schools, and contract schools throughout the U.S. are identified by different symbols which correspond to a key situated along the left border. The states are all illustrated, labeled, and shaded different colors to allow for easy differentiation. Cities and towns are labeled as well, as are railroads throughout the country. Yellowstone National Park, established in 1872, is also identified. Three insets are situated along the bottom border that illustrate Alaska, the Mission Indian Reservation in California, and the northeastern corner of the Indian Territory.

Perhaps the most intriguing part of this map is what is going on in the modern-day state of Oklahoma. Here, Oklahoma is split into two territories, the Oklahoma Territory and Indian Territory. The concept of an Indian Territory was the successor to the British Indian Reserve, which was. Established by the Royal Proclamation of 1763. After the Louisiana Purchase, President Jefferson and his successors viewed land west of the Mississippi River as available for the resettlement of Native Americans, which became official policy after the 1830 Indian Removal Act was signed by President Andrew Jackson. The Indian Territory was slowly whittled down as Americans moved west and more and more territories were formed. Wisconsin, Iowa, and the Dakotas all chipped away at land that had once belonged to Native Americans. The borders of modern-day Oklahoma, where Indian Territory was eventually reduced to, were established by the Kansas-Nebraska Act of 1854.

This map was created under the direction of Thomas Jefferson Morgan and published by the Norris Peters Company in 1892. It is well represented in institutional collections but rare on the private market.

Thomas Jefferson 'T.J.' Morgan (1839 - 1902) was an American Union Army officer, government official, Baptist minister, and public educator. Morgan served during the American Civil War as a lieutenant in the 17th Indiana Infantry before being commissioned as a lieutenant-colonel in the 14th U.S. Colored Infantry. He made full colonel in 1864 and wad commander of a Colored infantry brigade. He served as Commissioner of Indian Affairs under President Benjamin Harrison from 1889 - 1893.


Norris Peters (c. 1834 – July 15, 1889) was a Washington D.C. based photo-lithographer active in the late 18th and early 19th century whom Scientific American called 'one of Washington's most eccentric and mysterious figures.' Peters was born and educated in Pennsylvania. He relocated as a young man to Washington D.C. where he took work as an examiner for the United States Patent Office. During his work with the patent office he became fascinated with the emergent process of photolithography. In 1869 Peters secured substantial venture capital of about 100,000 USD from an unknown investor and founded The Norris Peters Company at 458 Pennsylvania Avenue. Their printing offices have been described as 'unequaled in this or any other country.' From these office Peters pioneered development of American photo-lithography. For nearly a generation he held a near monopoly on government photo-lithographic printing. Among their more notable contracts included numerous maps for congressional reports, maps of the U.S. Coast Survey, maps of the U.S. Geological Survey, Mexican currency for the State of Chihuahua, and the Official Gazette of the Patent Office. Peters also maintained an interesting social life and was a confidant to many of the most powerful figures in congress. He was also a bon vivant known for being an excellent cook and hosting lavish dinners the invitations to which were 'never declined'. Despite being socially active he never married and died a confirmed bachelor. Following Peters' death in 1889 his business was taken over by Henry Van Arsdale Parsell who administered it until his own death in 1901. The company then merged with Webb & Borcorselski, another D.C. lithography firm, and was renamed Webb & Borcorselski-Norris Peters. They continued to publish under this name well into the mid 20th century.