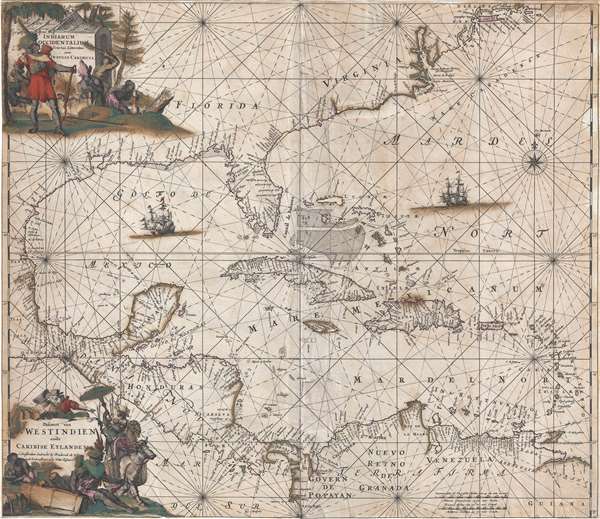 De Wit's masterful sea chart of the West Indies during the Golden Age of Caribbean Piracy.

A fine and rare old color example of the second edition of Frederick de Wit's 1680 nautical chart or maritime map of the West Indies, Central America, Gulf of Mexico, and Florida. Printed during the Golden Age of Caribbean Piracy, this sea chart covers the eastern coast of North America from Cape May and the Chesapeake Bay to Central America and the Spanish Main. It offers a reasonably detailed depiction of the West India Islands, Florida, and Central America. The American seaboard north of Florida is exaggerated in its northeasterly inclination, an error that would be corrected in the early 18th century. Similarly, the Yuchatan appears in a narrow configuration common in most Dutch maps until the late 18th century.. Note the Mississippi River Delta has not yet been identified, but numerous place names along the coast are identified, if only conjecturally. The whole is filled with rhumb lines and illustrations of galleons. Cartographically the map was partially derived from Hessel's Gerritsz's map of 1631 with updates derived from Joannes van Loon's map of 1661.

This map was published in de Wit's Orbis Maritimus ofte Zee Atlas of 1680. It was engraved by Romeyn de Hooghe. The second edition can be identified by the presence of the western cost of Central America and the addition of New Amsterdam in the upper right quadrant. Two subsequent editions were issued by L. Renard and the Ottens family.

All editions of this map are scarce.


Romeyn de Hooghe (Septemer 10, 1645 – June 10, 1708) was a Dutch engraver, portrait artist, caricaturist, painter, and sculptor active in Amsterdam during the second half of the 17th century and opening years of the 18th century. De Hooghe was born in Amsterdam and revealed an early talent for all forms of visual arts. He became known caricaturist and is admired today as one of the first great graphic satirists. During his life he was criticized for his proclivity towards humorous tongue-in-cheek subjects. He nonetheless developed a following and produced a prolific amount of work, some 5000 engravings. He was a member of the Confrerie Pictura in 1662 and 1683. Cartographically he is best known for his decorative border work. His disciples were Filibert Bouttats (1654-after 1731), Filibertus Bouttats (1635–1707), Frans Decker, François Harrewijn, Jacobus Harrewijn, Aernout Naghtegael, Laurens Scherm, and Adriaen Schoonebeek. De Hooghe died in Haarlem on June 10, 1708. Much of his work continued to be republished posthumously. Learn More...