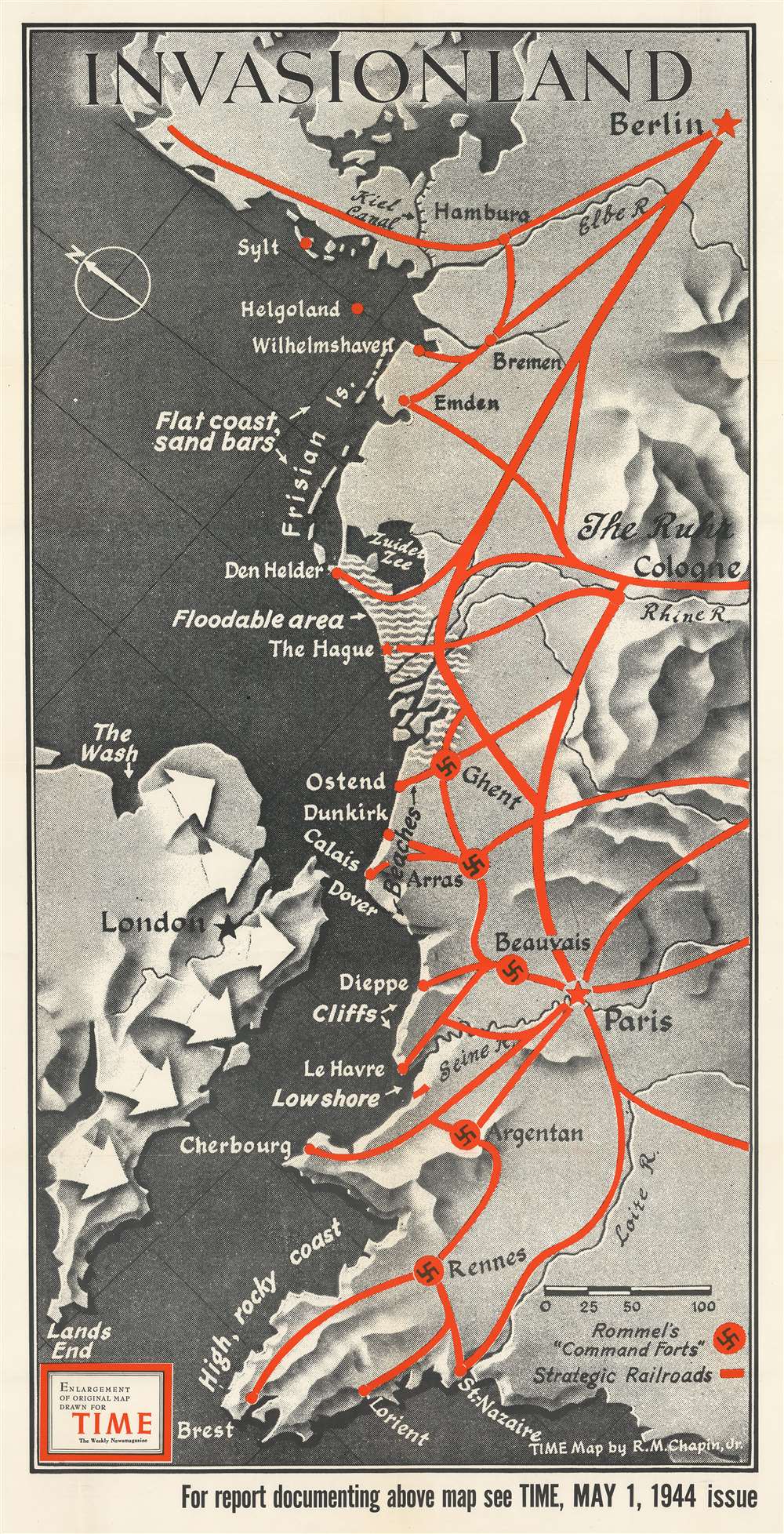 A striking map of northern Europe speculating on where the Allies would invade in the spring of 1944.

Perhaps the worst best-kept secret of World War II, by the spring of 1944 everyone on the planet was waiting for the long-awaited Allied invasion of Northern Europe. This map, created by Robert M. Chapin, Jr., encapsulates that anticipation, speculating where American and British forces would land along the northern coast of Europe. Here, numerous locations along the coast are identified, including Calais (which was believed to be the most likely location for the invasion), Dunkirk (the site of the storied evacuation of British and French troops), Cherbourg, Brest, and even Wilhelmshaven, the German submarine base. The thick red lines indicate major railways, illustrating where it would be easiest for the Germans to quickly move their forces to repel the invasion. The swastikas inscribed in red circles mark 'command forts' constructed by Rommel to help repel the expected invasion.

Through 1942 and 1943, American and British troops fought their way across North Africa, Sicily, and Italy, reversing German and Italian gains. The Soviet Red Army, after years of brutal fighting on the Eastern Front, including fighting within miles of Moscow, had turned the tide and were marching across Eastern Europe toward Berlin. Now it was expected that Allied troops would undertake an amphibious assault somewhere along the coast of northern Europe. Conventional wisdom on both sides believed that Calais would be the site of the Allied amphibious assault, since only twenty miles separated Britain and France.

Since the D-Day Invasion in Normandy happened seventy-five years ago, we know the actual invasion point, the Normandy coast. Here, this part of the French coast is not even highlighted here as a major possibility. Situated between Cherbourg and Le Havre, the only notation here is that there is 'low shore' near Le Havre and the mouth of the Seine. While that is true, troops landing at Omaha Beach a little over a month after this map was published faced cliffs and bluffs, making their exit from the beachhead much more difficult. Although popular history remembers D-Day almost as a 'sure-thing', in reality the operation it was much more tenuous and, if events had gone even slightly differently, may not have been as successful. In the end, the courage and valor of the Allied troops that hit the beaches and parachuted in from airplanes managed to secure enough territory to continue pushing inland and made the invasion a success.

Very good. Light wear along original fold lines. Has old institutional collection stamp on verso. We have contacted the institution to verify that this item was legally deaccessioned.
Looking for a high-resolution scan of this?