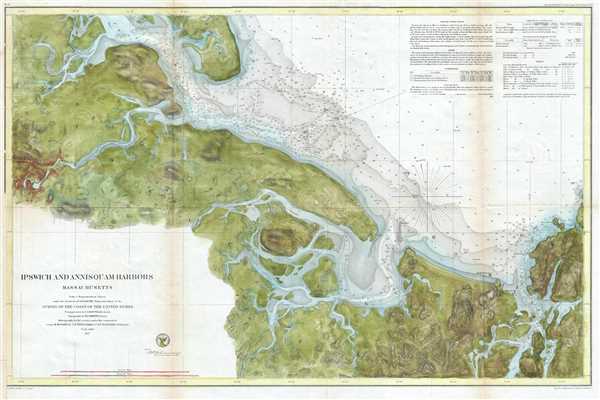 Detailed chart of the Massachusetts coast between Ipswich and Annisquam.

This is an 1857 U.S. Coast Survey nautical chart or maritime map of Ipswich and Annisquam Harbors, Massachusetts. The map depicts the region from the Ipswich River and Plum Island to the Essex River and Dogtown and from Ipswich, Massachusetts to Annisquam, Massachusetts, and illustrates the various bays and estuaries in between. Unlike many coastal charts, this example also has significant inland detail, showing roads, towns, farms, and some topographical features. Countless depth soundings are indicated throughout. Sailing instructions as well as notes on tides and magnetic variation are situated in the upper right corner. These two important ports are located just north of Boston near Cape Ann. Both were centers of for the cod fishing and whaling industries in the 18th and 19th centuries. Today they are popular tourist destinations.

The triangulation for this nautical chart was completed by C.O. Boutelle. The Topography is the work of H. L Whiting. The hydrography was accomplished by parties under the command of M. Woodhull, S. D. Trenchard, and C. R. P. Rodgers. The chart was published under the supervision of A. D. Bache, one of the most influential and prolific figures in the early history of the U.S. Coast Survey, for the 1853 Report of the Superintendent of the U.S. Coast Survey.

Very good. Backed on archive tissue for stability. Left margin extended. Blank on verso.
Looking for a high-resolution scan of this?