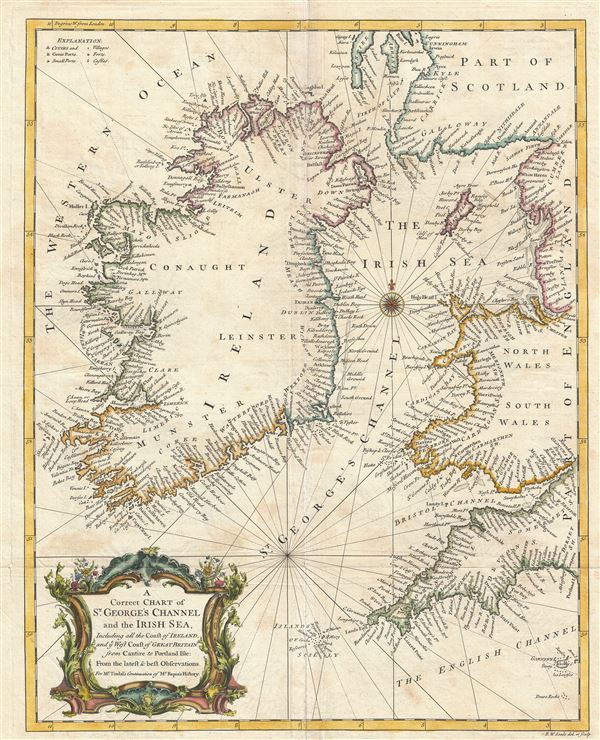 An extreme attractive 1747 nautical chart or maritime map of Ireland and St. Georges Channel. Engraved by R. W. Seale, this map covers the entirety of Ireland as well as adjacent parts of Scotland, England, and Wales. Being essentially a nautical chart, only coastal cities and towns are noted and rhumb lines are present throughout. Shoals and other underwater dangers are identified here and there. An elaborate cartouche of a rococo ethic is set in the lower left quadrant. Seale engraved this chart for includes in M. Tindal's English language translation of M. Rapin de Thoyras's History of England.

Richard William Seale (December 1703 - May 25, 1762) was an English a mapmaker and engraver active in London during the middle part of the 18th century. Seale was the son of Richard and Elizabeth Seale. Richard, his father, was a member of the Stationers Company, suggesting that printing and engraving must have been a family trade. Nonetheless, he did not learn the trade from his father, but rather from Samuel Parker of Clerkenwell, to whom he was apprenticed in 1719. Seale was extremely active as an engraver and publisher from about 1740 until his death in 1762. His cartographic corpus is vast; including pieces engraved for most other notable English cartographers of his period: Willdey, Baron, Toms, Rocque, Basire, Bowles, Benning, among others. In addition to cartographic work, Seale also produce numerous architectural engravings.

Very good. Some toning and wear on original fold lines.
Looking for a high-resolution scan of this?