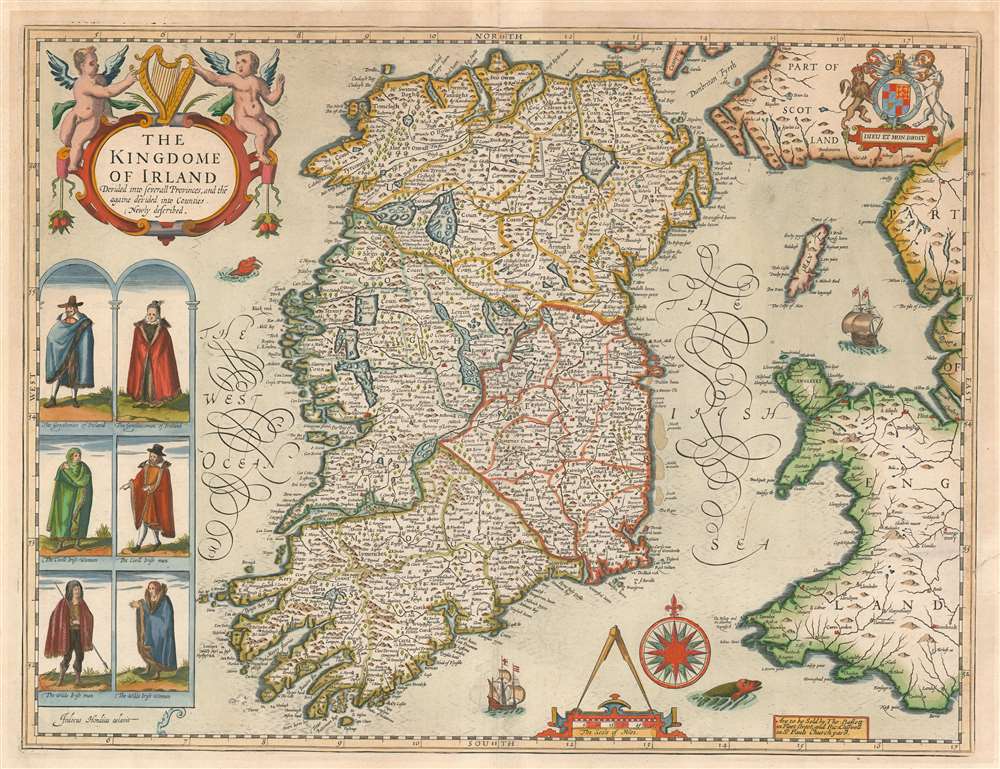 This is John Speed's map of Ireland, the first map of Ireland published in an English atlas. Engraved in 1610, It was included in Speed's The Theatre of the Empire of Great Britaine, which was the first collection of maps of the counties of the British Isles. The engraving is the work of Jodocus Hondius, who engraved many of the plates of Speed's atlases. This was fortunate for Speed. Hondius had become familiar with the Irish surveys of Robert Lythe. Lythe, an English surveyor and topographer, had been tasked by the British government between 1567 and 1570 to survey Ireland in the wake of the Tudor Conquest, in order to aid the garrisoning and colonization of the island. Lythe's survey proved a mammoth undertaking. Of it, J. H. Andrews remarked:

Since the number of Lythe’s Irish place-names runs to several thousands (no other Elizabethan surveyor reached four figures) his visit must—on grounds of quantity alone—be accounted the most important event in the cartographic history of sixteenth-century Ireland.

Despite these being the most up-to-date surveys of Ireland, they were not well disseminated until the end of the 17th century. Ortelius' maps, for example, were based on Mercator's outdated mapping of the 1560s, and did not benefit from Lythe's contemporaneous surveys. Hondius, on the other hand, had encountered Lythe's work while living in England, and he drew on it while executing Pieter van den Keere's 1592 Hyberniae novissima descriptio as well as the map he engraved for Speed. (The sole known copy of the Kaerius map survives in Linen Hall, Belfast.)

The Depictions of the Irish

At left are illustrations of men and women of various stations of Irish society: 'Gentlemen' and 'Gentlewomen,' the 'Civil' Irish man and woman, and lastly a pair of 'The Wilde Irish,' emphasizing to an English audience both the familiar mode of dress of the urban and noble Irish, while at the same time highlighting the more alien qualities of the population away from the larger towns. The English verso text reveals more:

'The Irish… are a strong and bold people, martiall and prodigiall in war, nimble, stout and haughtie in heart; careless of life, but greedy of glory; courteous to strangers, constant in love, light of belief, impatient of injury, given to fleshly lusts, and in enmity implacable.'

Among the other subjects addressed, Speed the historian also describes Ireland's land, climate, and cold remedies:

'The ayre of this land is delectable and wholesome, though neither so cleare nor subtile as is ours of England... The soyle... is uneven, woody, wilde, waterish and boggie, so full of Loghs and Meeres, that great ponds of water are found upon the high mountains. These indeed make the places somewhat dangerous to new comers, by breeding of rheums, dysenteries, and fluxes, whose usual remedie is Uskebah, a wholesome Aqua vitae, that drieth more, and enflameth less, then many other hot confections.'

The map's decorative engraving includes an ornate cartouche, surmounted by an Irish harp and flanked with putti;The British Royal arms appear in the upper right-hand corner of the map. The waters around Ireland are prowled by two sea monsters and a pair of sailing ships. There is an elegant compass rose.

This map was engraved by Jodocus Hondius in 1610 for inclusion in John Speed's Regnvm Hiberniae Continens. published in London by Sudbury and Humble in 1616 It continued in publication in Speed's atlases in all their editions. This example bears the imprint of Basset and Chiswell, whose edition of Speed's atlas was published in 1676. Seven examples of the separate map, in various editions, appear in institutional collections in OCLC.


Robert Lythe (fl. 1556-1571) was an English surveyor and mapmaker. Nothing is known of his early life. Although he appears to have specialized as a military surveyor, he was sufficiently broadly educated to be able to make references to hydrography, land quality, natural curiosities and local history in his manuscript maps - which were themselves neatly and attractively executed. His earliest known work was a map of the vicinity of Calais produced during an Anglo-French border dispute. His farthest-reaching work were the Irish surveys he executed between 1567 and 1570, on behalf of the British government, in order to better understand how best to garrison and colonize Ireland following the Tudor conquest. Though these surveys were not for many years broadly disseminated, they would inform to a greater or lesser extent the maps executed by Plancius, Boazio and Norden. Jodocus Hondius drew on Lythe for the Ireland maps he produced for van der Keere and Speed: thereafter, Speed’s 1610 map of Ireland incorporating Lythe’s surveys would provide the basis for most 17th century maps of the island. Learn More...

Speed, John. An Atlas of England and Wales. By J. Speed (Basset and Chiswell, London) 1676

Rumsey 12058.157 OCLC 937850687. Andrews, J. H. Colonial Cartography in a European Setting: The Case of Tudor Ireland. Woodward, D. Ed. 'The History of Cartography, Volume 3: Cartography in the European Renaissance, Part 2.' University of Chicago Press, 2007.
Looking for a high-resolution scan of this?