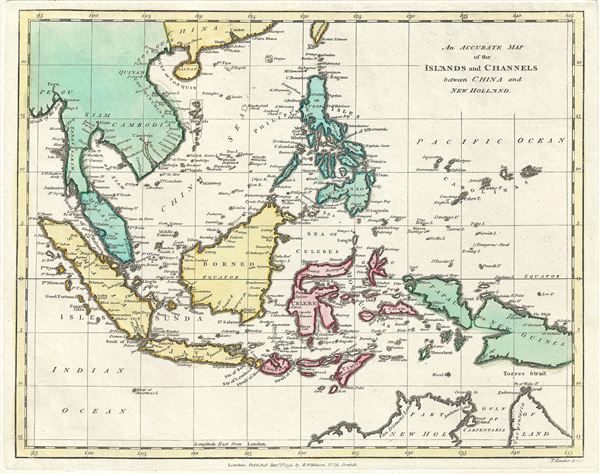 This is a fine 1791 map of the East Indies and Southeast Asia by Robert Wilkinson. Wilkinson's map covers the region from Burma or Myanmar to northern Australia and from Sumatra to New Guinea, inclusive of Borneo, Malay, Singapore, Siam (Thailand), Cambodia, Vietnam (Chochine), the Philippines, and New Guinea. The Straits of Singapore (Sincapore), but not the island or city, which had yet to be developed, appear. As the title suggests, Wilkinson conceived this map in the light of the New English settlement of New South Wales, Australia. The English, he anticipated, would soon be navigating these waters in vast numbers as they transported their trade good to the lucrative markets of China. The incomplete borders of New Guinea are suggestive of just how little known this region was even in the late 18th century.

This map was engraved by Thomas Conder and issued as plate no. 38 in the 1792 edition of Robert Wilkinson's General Atlas.