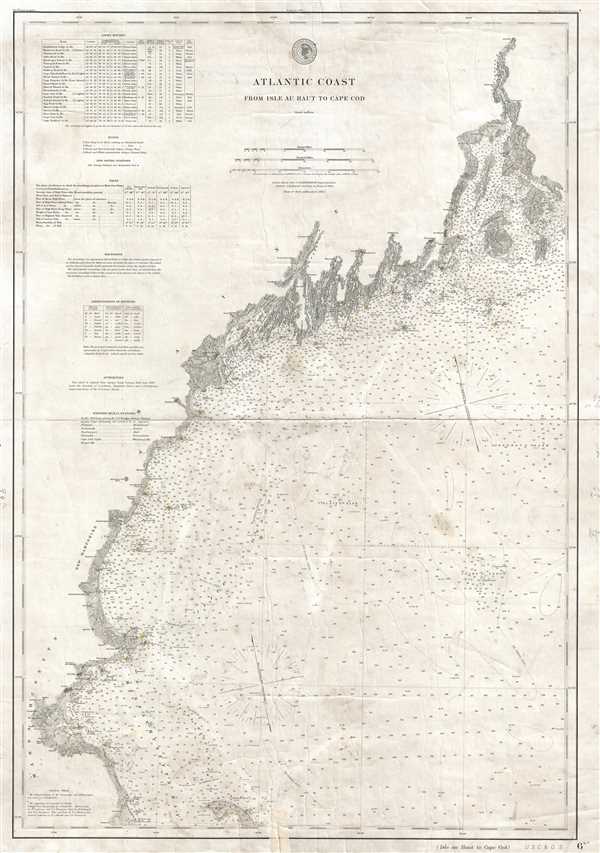 Meticulous chart of the Atlantic Coast from Maine to Massachusetts.
$600.00

This is an 1881 U.S. Coast and Geodetic Survey nautical chart or maritime map of the northern Atlantic coastline of the United States. The map depicts the Atlantic coastline from the Isle au Haut and Penobscot Bay, Maine to Cape Cod and Kingston, Massachusetts and from the coastline into the Atlantic Ocean as far as Cashe's Ledge and Jeffrey's Bank. A highly detailed depiction of the coastline, all of the river mouths islands, and islets are illustrated in detail. Innumerable depth soundings are included all along the coast. Lighthouses have all been shaded yellow. Cities and towns along the coast are labeled, including Bangor, Kennebunkport, and Portland, Maine; Portsmouth, New Hampshire; and Newburyport, Salem, and Boston, Massachusetts. A table of light houses, with latitude and longitude, character of the light, the time between flashes, the distance at which the light is visible (in nautical miles) and other information included is situated on the upper left. Information about buoys, 'life saving stations', tides, and soundings, and other information important to the mariner is included below the table containing the information about light houses.

This map was published as plate no. 1777 by the U.S. Coast and Geodetic Survey in March 1881, Carlile Pollock Patterson, Superintendent.


Carlile Pollock Patterson (August 24, 1816 - August 15, 1881) was the fourth superintendent of the United States Coast Survey. Born in Shieldsboro (now Bay St. Louis), Mississippi and the son of the American naval officer Daniel Todd Patterson (1786 - 1839), Carlile joined the navy as a midshipman in 1830. He graduated from Georgetown College in Kentucky as a civil engineer in 1838 and was attached to the U.S. Coast Survey from 1838 - 1841. In 1841, he was commissioned as a lieutenant. As commander of the Coast Survey schooner Phoenix, Patterson led the first USCS hydrographic expedition of the Gulf of Mexico in 1845. Patterson resigned from the Navy in 1853. At the outbreak of the Civil War in 1861, Patterson returned to federal service as a civilian hydrographic inspector in the Coast Survey, in charge of the charting and survey work. He was appointed as the Superintendent of the U.S. Coast and Geodetic Survey in 1874, a post he held until his death. Learn More...