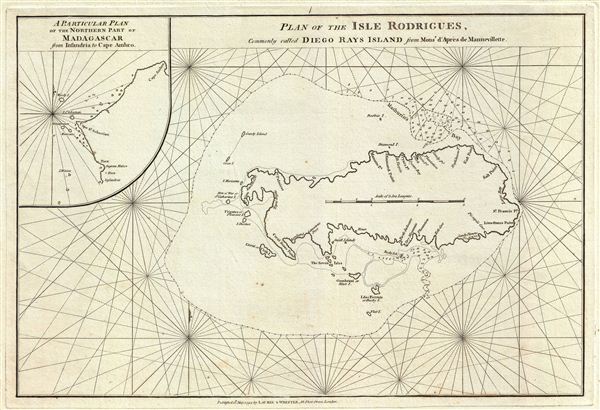 This is a fine example of Laurie and Whittle's 1794 nautical chart or maritime map of the Isle Rodrigues or Diego Rays Island, part of the Mascarene Islands in the Indian Ocean. It covers the entire island along with surrounding smaller islands, including Diamond Island, Crab Island, the Seven Isles, Booby Island, among others. Mathurin Bay (Port Mathurin) is also noted. An inset in the upper left quadrant of the map features a plan of the northern part of Madagascar, from Infandria to Cape Ambro. The Island, believed to have been discovered ancient Arabs mariners, was first mapped in Europe by Alberto Cantino in 1502 and called Dina Morare. In 1528, the Island was renamed after the Portuguese explorer Dom Diego Rodrigues and has since retained the name. Although the Rodrigues did not see many visitors, 17th century Dutch seafarers did visit the island for fresh food supplies. Later, during the 18th century, the French introduced African slaves in an attempt to develop farming and stockbreeding. Slavery was abolished when the British took over the island in 1809.

This chart is cartographically derived from Jean-Baptiste d'Apres de Mannevillette's similar chart issued for the 1745 Neptune Oriental. It was published by Laurie and Whittle from their offices at 53 Fleet Street, London, on May 12, 1794.