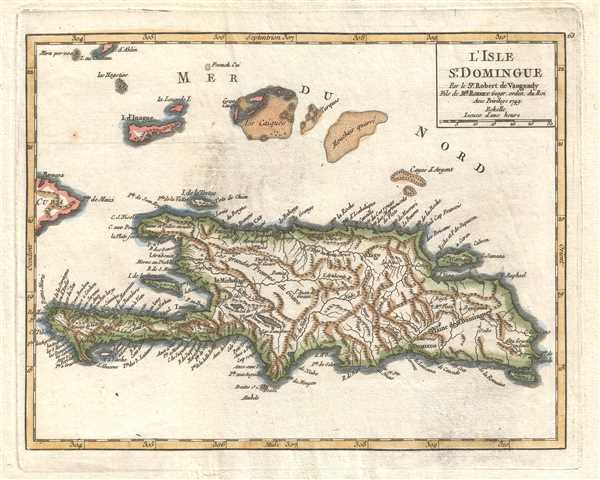 Gorgeous hand colored map of Hispaniola or Santo Domingo and the Turks and Caicos Islands.

This is a hand colored 1749 Didier Robert de Vaugondy map of the island of Hispaniola or Santo Domingo (Haiti / Dominican Republic). The map depicts the entire island of Hispaniola or Santo Domingo, along with the extreme eastern part of Cuba, the Turks and Caicos Islands (les Caiques), and the Inagua Islands (I. d'Inague). Port-au-Prince is labeled, although it is not bolded. Santiago (S. Yago) is labeled and, unlike Port-au-Prince, is bolded. Myriad rivers and streams are depicted, as well as numerous mountain ranges. Locations around the island, predominantly along the coast, are labeled, as well as Les grandes Prairies du Goave and the Plaine de S. Domingue.