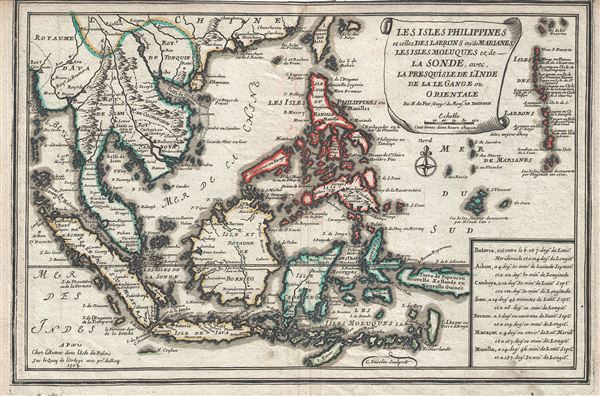 This is a beautiful and scarce 1702 map of the East Indies by Nicholas De Fer. It covers all of Southeast Asia and the East Indies from the Andaman Islands east to New Guinea and from Taiwan or Formosa south as far as Timor. Includes the modern day nations of Taiwan, Thailand, Burma (Myanmar), Malaysia, Cambodia, Laos, Indonesia, Vietnam, Borneo, New Guinea and the Philippines. Renders the region in detail offering both topographical and political information with mountains beautifully rendered in profile. The Island and the Strait of Singapore (Sincapura) are noted. Names Bali and Lombok as well as Batavia. Most of the Great Sunda Islands as well as the Lesser Sunda Islands, which were largely unexplored well into the 19th century, are mapped speculatively. This map was engraved by Charles Inselin and created by Nicholas De Fer for his 1702 atlas of Spanish possessions.