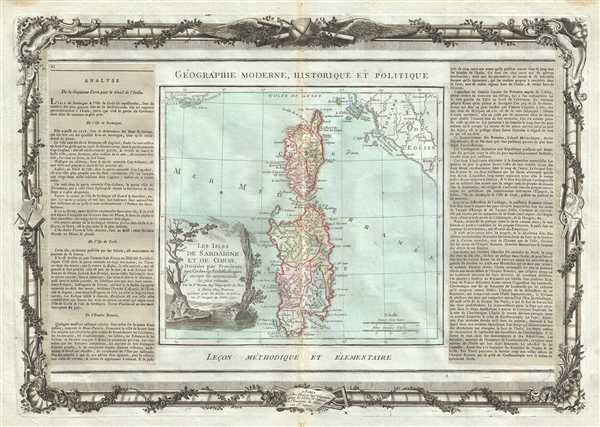 Early map of the Mediterranean Islands.
$300.00

This is a lovely 1786 map of the Mediterranean islands of Corsica and Sardinia by the French Cartographer Louis Brion de la Tour. It covers the two islands in beautiful detail, and notes cities, towns, rivers, mountains and other topographical features. With its unique blend of dramatic mountains and stunning pristine beaches, Corsica is considered to be one of the world's most beautiful places.

At the time this map was made, Sardinia was part of the Kingdom of Sardinia under the Spanish Habsburg dynasty. The Kingdom of Sardinia or Piedmont-Sardinia was ruled by the House of Savoy since 1720, barring a short period when the mainland domains were annexed by Napoleonic France. The Congress of Vienna however returned these territories to the House of Savoy in 1814 with the inclusion of Genoa.

A beautifully engraved title cartouche adorns the bottom left quadrant of the map. To the left and right of the map are paste downs of French text with remarks and description of the map. Surrounding the whole is an elaborate decorative border featuring floral arrangements, surveying tools, elaborate baroque scalloping, and a winged globe. This map was issued as plate no. 21 in the most deluxe edition of Desnos’ 1786 Atlas General Methodique et Elementaire, Pour l’Etude de la Geographie et de l’Histoire Moderne.