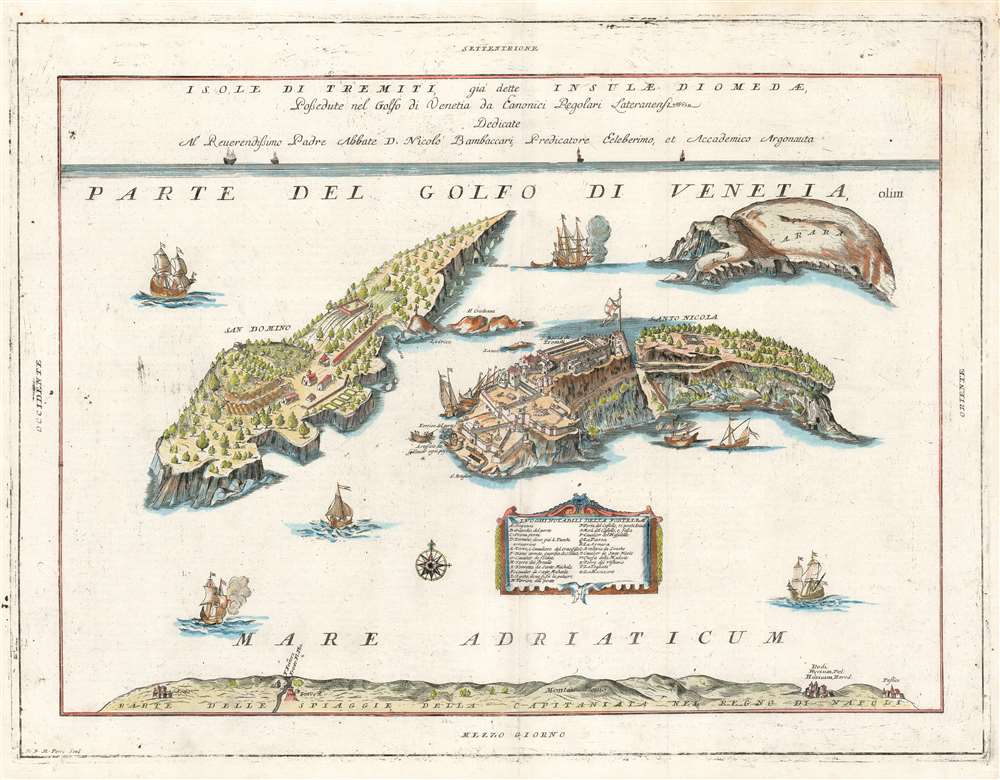 Dramatic Islands of the Gulf of Venice

This is the 1697 Vincenzo Coronelli map of the Isole Tremiti. These rocky islands have a long history of settlement, despite the frequent earthquakes that give the islands their name. The map shows both of the main islands - San Domino, and San Nicola - but also the uninhabited La Carara (Capraia) Credazza (Cretaccio) and the diminuitive La Vecchia (an island so small that while its name appears on digital maps the island itself seldom does.) San Domino is shown with cultivated fields, terraces, a church, and neatly ordered dwellings. San Nicola is dominated by its great, fortified monastery. At the bottom of the map is shown 'Part of the Beach of the Capitaniata of the Kingdom of Naples,' 'Capitaniata' being an early term for the Province of Foggia.

At the time this map was prepared, the islands had for almost three hundred years been in the possession of the Canons Regular of the Lateran, a Catholic order of priests and lay brethren who famously defended the islands from Ottoman attack in the 16th century.

The islands have a somewhat longer history of involuntary settlement. In the first century CE, Augustus Caesar exiled his granddaughter Julia the Younger to one of these islands. In the 20th century, Mussolini interned prisoners there. And indeed, after he suppressed the Lateran Canons in 1783, Ferdinand IV of Naples would establish a penal colony in the Isole Tremiti.

In spite of the conditions which apparently make these islands suitable for monastic isolation and penal servitude, today they are part of Italy's National Parks, and enjoy what appears to be a thriving tourist trade, attracting divers in particular.

This map appeared in editions of Coronelli’s Corso Geografico Universale in 1692. It was also included in his Atlante Veneto in 1697, and the presence of verso text indicates that this example is from the latter work. This edition of the map is catalogued separately only by the Biblioteca Nacional de Espana. The Atlante Veneto is well represented in institutional collections.

Coronelli, V. Atlante Veneto (Venice), 1697     The Corso Geografico Universale was a Venetian cosmographic atlas issued by the Jesuit Minorite friar, geographer, and globe maker Vincenzo Maria Coronelli. The Corso Geografico is generally dated to 1692 and is considered a follow-up to the Atlante Veneto. There is no confirmed collation of the atlas, as all editions were assembled ad-hoc. Also maps for the atlas were also sold separately, and to subscribers the rate of six cards a month for two years. The maps of the Corso Geografico are generally unique works of great historical value. They are also masterpieces of craftsmanship, engraved between 1688 and 1692 in the well-equipped cartographic workshop of the Saint Maria Gloriosa dei Frari Convent. Editions of the Corso Geografico can roughly be broken up as 68 maps 1689-92; 173 maps, 1692; 260 maps, 1694-97).