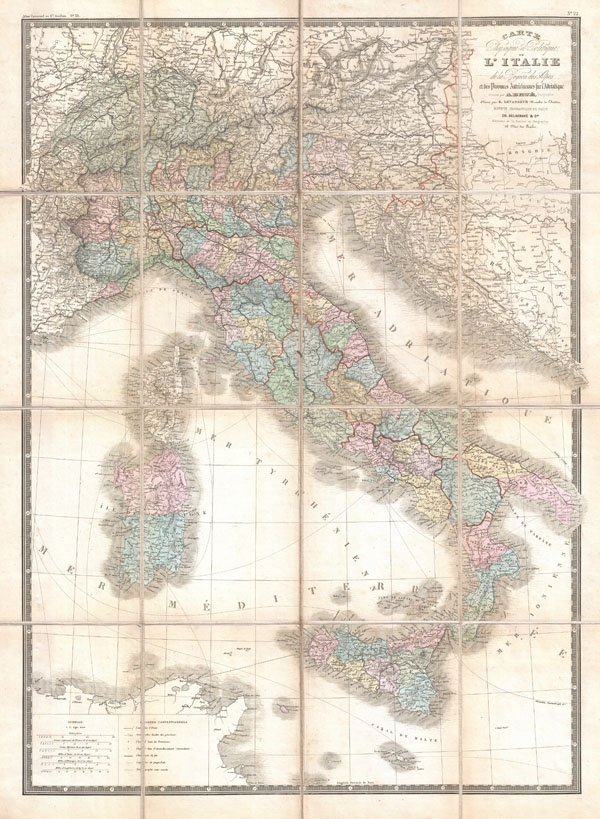 This is A. Brue's c. 1870 map of Italy. Covers the entire peninsula of Italy including the Sicily, Corsica and Sardinia. Extends north to include Switzerland and parts of Austria and Bavaria. Shows shipping routes between Italy and North Africa, as well as to other European nations. Issued in linen backed folding format as map no. 30 of A. Brue and Emile Levasseur's c. 1870 Atlas Universel en 67 Feuilles


Adrien-Hubert Brué (1786 – July 16, 1832) was a French cartographer active in the late 18th and early 19th centuries. Brué served on various ships from age 12. At 14 he was commissioned to the crew of the Naturalist, one of the two ships in Baudin Expedition (1800 – 1804) to the South Pacific. Later in life, Brué turned to cartography where his work was known for remarkable clarity and accuracy. Brué eventually acquired the prestigious office of Geographe du Roi and often signed his maps as such. In this position Brue contributed to thousands of maps and numerous atlases. Like most cartographers many of his maps were published posthumously by his partner, Charles Picquet's son and heir, Pierre-Jacques Picquet, and were still being updated and republished decades after his death.

Very good. Light toning on original folds. Dissected and mounted on original linen in 16 sections.
Looking for a high-resolution scan of this?