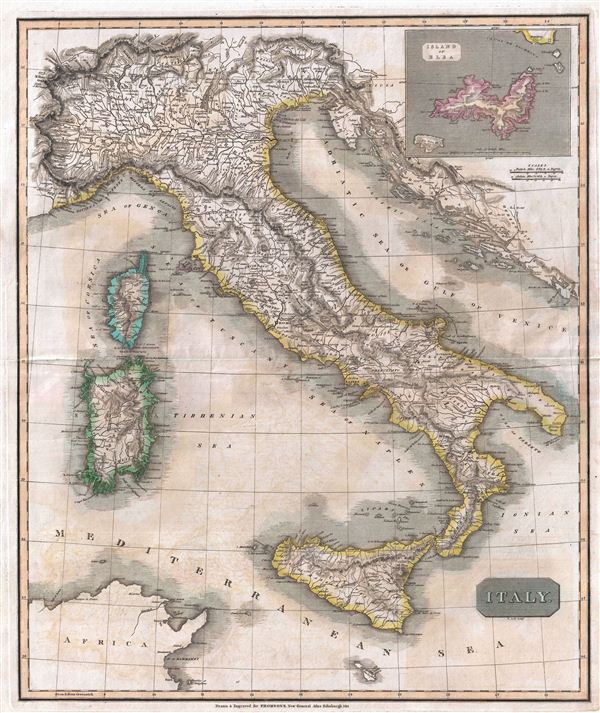 Italy on the cusp of its national solidarity movement.

This is an exceptionally fine example of John Thomson's 1814 map of Italy. Thomson's map of Italy covers peninsular Italy from the Alps to Calabria as well as the adjacent islands of Sicily, Sardinia, and Corsica. Parts of northern Africa and the Dalmatian coast are also included. The whole is beautifully engraved in the minimalist English style pioneered in the early part of the 19th century. Relief is shown by hachure with towns, cities, and major topographical features identified.

Thomson issued this map shortly after the dissolution of Napoleon's empire in Europe. Following Napoleon's exile to Elba, shown here as an inset in the upper right quadrant, Italy was divided between Austria, the Kingdom of Sardinia, and the Kingdom of the Two Sicilies. Nonetheless, a sense of national solidarity has begun to emerge and the subsequent popular uprisings throughout the peninsula would soon lead to a new Kingdom of Italy and the Italian unification movement.

This map is a steel plate engraving by Scott Robert and was prepared by John Thomson for inclusion in the 1814 edition of Thomson's New General Atlas.