1773 Mount and Page Map of Jamaica 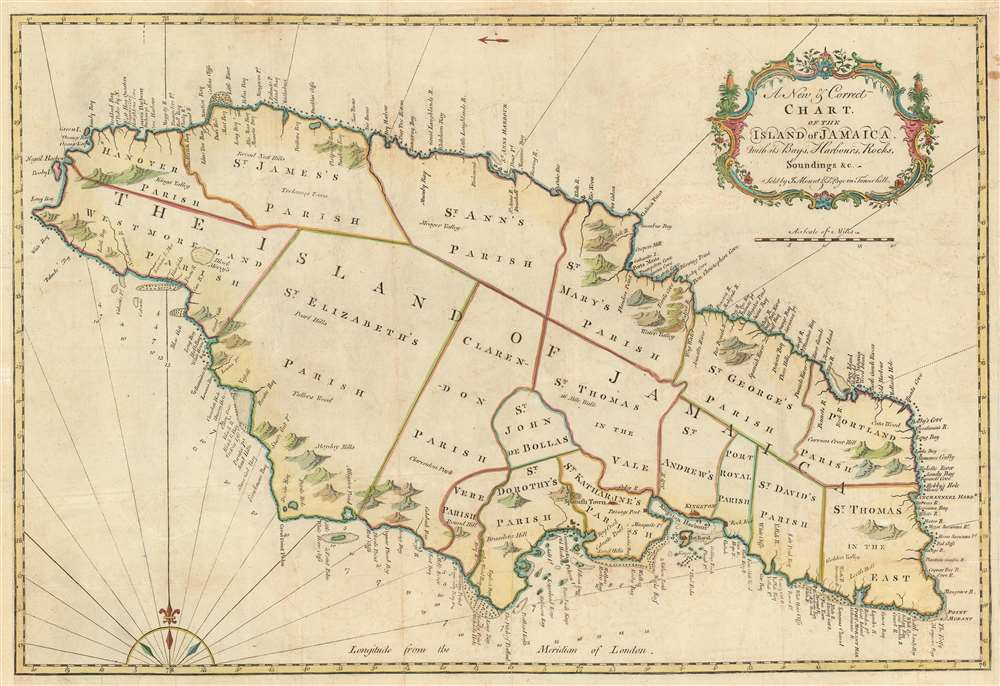 1773 Mount and Page Map of Jamaica

Jamaica, its parishes and navigational hazards.
$800.00

This detailed, large 1773 Mount and Page map of Jamaica was at the time of its publication one of the most accurate maps of the island available to the English navigator - The English Pilot being the first entirely English sea-atlas to focus on American waters. The map, properly speaking, is more of a chart - showing its best detail in coastal features, such as anchorages and depth soundings, and provides data for elevations just inland. Port Royal, Kingston, Spanish Town, Careening Caye, and Rock Fort are all shown, with the rest of the island bereft of settlement, apart from Trelawny town (noted in the location of the parish of that name, which does not appear). The interior of the island, the site of both the island's sugar industry and its long history of slave uprisings, is vacant according to this map's nature as a nautical chart.

This map appeared in Mount and Page's navigational atlas, The English Pilot. It was included in the fourth volume, which was dedicated to the navigation of the West Indies. Many editions of the atlas were produced, and there is little distinguishing one edition from another as the publishers were less than diligent in updating their work.

The English Pilot. Fourth Book, (London) c. 1773.     The English Pilot, published from 1671 to 1794, was the brain child of John Seller (1630 – 1697). Seller, recognizing a lack of quality English-made nautical charts, began to compile and engrave charts for a new maritime atlas as early as 1669. That same year he announced the publication of the English Pilot. The work was intended to be published in geographically specific volumes such that only the necessary maps need accompany a voyage. The English Pilot, The First Book, covering English waters, was published in 1671. Despite his claims, most of the maps in the first book were not English productions, but rather worn out Dutch map plates purchased as scrap and then retooled with Seller's imprint. Nonetheless, the work proved popular among merchant seamen and earned him the title 'Hydrographer in Ordinary' as well as copyright protection for 30 years. Seller failed to fully realize his grand scheme but it was picked up in earnest by other cartographers, including William Fisher, John Thornton, John Wingfield, Richard Mount and Thomas Page. Subsequent volumes followed including The Second Book, covering the Mediterranean; The Third Book covering African and Arabian coasts; The Fourth Book comprising the first British atlas exclusively dedicated to the Americas; The Fifth Book, a volume of practical Navigation; and The Sixth Book focusing on East Asian waters. The English Pilot was issued in over 40 editions with a print run exceeding 100 years. It was also pirated by George Grierson and published in Dublin under his imprint. It is one of the most important British atlases ever published.