1855 U. S. Coast Survey Map or Chart of the James River, Virginia 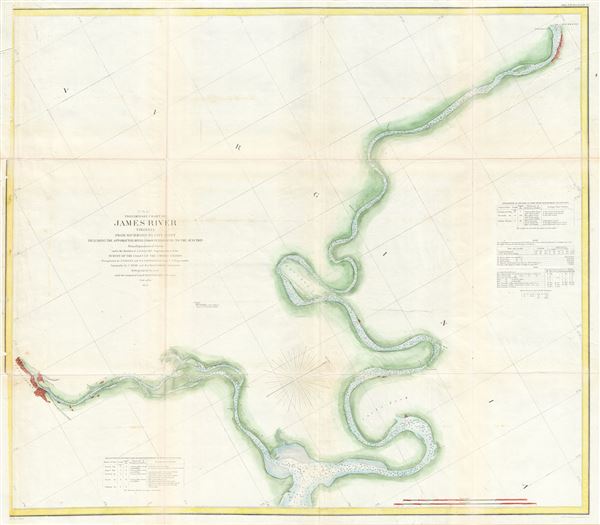 1855 U. S. Coast Survey Map or Chart of the James River, Virginia

This is an attractive 1855 U.S. Coast Survey nautical chart or map of the James River, Virginia. It covers the James River from Richmond to City Point, including part of the Appomattox River from Petersburg to the junction. The map offers excellent detail noting countless depth soundings and navigational notes, but little inland detail. However, it does identify the city of Petersburg located on the Appomattox River.

Shortly after this map was produced, this region would witness the Appomattox Campaign, a series of battles fought in Virginia during the American Civil War, leading to the defeat of General Robert E. Lee and the end of the war in Virginia.

The triangulation for this chart was accomplished by J. Farley and W. B. Trowbridg. The Topography is the work of J. Seib and S. A. Wainwright. The Hydrography was completed by R. Wainwright. This map was compiled under the direction of A. D. Bache, Superintendent of the Survey of the Coast of the United States and one of the most influential American cartographers of the 19th century.