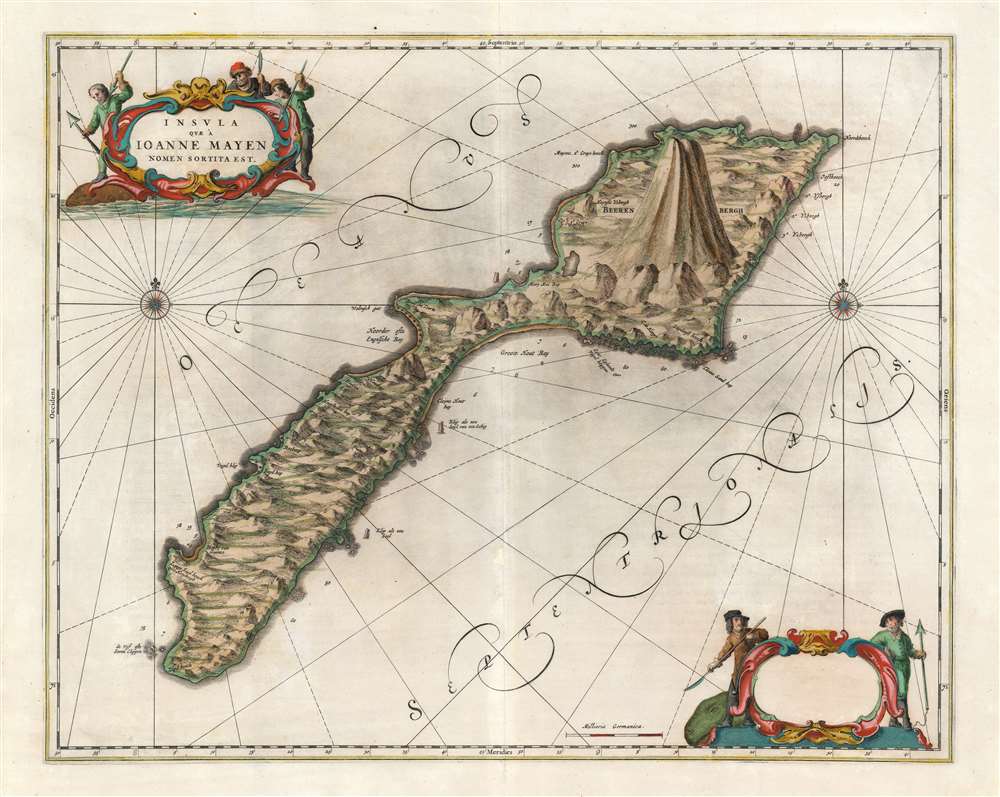 This is a beautiful and rare original-color Dutch Golden Age 1659 Blaeu map of Jan Mayen, a volcanic island in the Arctic, and a possession of Norway. Having no permanent population, the island was primarily a whaling post, as witness the hapless cetaceans and harpoon-brandishing sailors in the superbly engraved cartouches.

The island's mountainous, glaciered terrain is evocatively depicted, with the northeast end dominated by the Beerenberg volcano. The rocky, treacherous shore - which claimed ships as recently as the Second World War, when the island was contested as a radio listening post - is clearly depicted, with special attention to rocky landmarks such as Klip als een Seyl van een Schip (Rock like the sail of a ship).

Jan Mayen Island is, in the modern era, exploited solely for gravel. Its surrounding waters are important fishing grounds, worked both by Norway and Denmark. While there is reasonable speculation that Jan Mayen had been visited by the Irish of the 9th century, or the Vikings, there is no archaeological evidence to support it, and no record of such landings has survived. Rivalry between the Dutch and the English over the Arctic whaling grounds offered competing claims on the part of both the seafaring nations, as early as 1607. The first definite landfalls of Jan Mayen occurred in 1614. One of these, on behalf of the Noordsche Compagnie, was led by captain Jan Jacobszoon May van Shellinkhout; he named the island after the ship's cartographer (Mr. Joris Eyland, after Joris Carolus). The following year, English whaler Robert Fotherby landed on the island, and being under the impression he was the first to discover the place, named it 'Sir Thomas Smith's Island.' Willem Blaeu included the island on his map of Europe, and there named it 'Jan Mayen' after Jan Jacobszoon May, emphasizing the Dutch discovery. The elder Blaeu produced the first detailed chart of the island in his 1623 Zeespiegel, which entrenched the name further.

Beginning in 1614, the Dutch Noordsche Compagnie claimed a monopoly on Arctic whaling. Between 1615 and 1638, Jan Mayen was used as a base for those operations. The map includes buildings along the northwest coast of the island, where the Dutch maintained stations, visible at South and North Bay. There were forts constructed in 1628 to defend the stations, one of which appears as 'Brielsche Toorn' north of the settlement. A team of seven Dutch who stayed the winter of 1633 to defend the island died either of scurvy or trichinosis (from eating raw polar bear meat). They were memorialized with a cross overlooking Sjuhollendarbukta (Seven Hollander Bay.) The cross appears on the map.

Joan Blaeu's map does not reproduce his father's work. Rather, it follows the model of competitor Jan Jansson's 1650 map of the island. This was produced after the boom in Arctic whaling, which diminished around 1640 at which point the population of bowhead whales had been hunted to near extinction. Jansson's source is not known, but the improvement of detail at the coast over Blaeu's 1623 chart suggests that he had access to the charts of the Noordsche Compagnie.

This map is rare, having appeared in only four editions of the Blaeu Atlas Maior, and only in the 1659 Spanish edition of the Nuevo atlas o Teatro del mundo (with which this example conforms typographically.) Three examples of the complete Nuevo atlas o Teatro del mundo are cataloged in OCLC. There is only one example of this separate map cataloged in OCLC, misidentified by Durham University Palace Green Library as the Jansson.

Blaeu, J., Nuevo Atlas, (Amsterdam: Blaeu) 1659.     The classic Dutch atlas, whose publication ushered in the Dutch golden age of cartography. Willem Jansz Blaeu had been, since 1604, producing engraved maps for sale; these were separate issues (and all consequently extremely rare) until the publishing of Blaeu's Appendix in 1630 and 1631, which also included a number of maps purchased from the widow of Jodocus Hondius, (for example his famous iteration of John Smith's map of Virginia.) In 1634, he announced his intention to produce a new world atlas in two volumes, entitled Theatrum Orbis Terrarum, sive Atlas Novus (in an effort to invoke the successful work of the same title produced by Ortelius the previous century, while reinforcing the notion of it being a new work.) This work was published first in German in 1634, followed by Latin, Dutch and French editions in 1635. Blaeu's maps have always been noted for the quality of their paper, engraving and fine coloring, and this was the intent from the very start. The 1634 announcement of the upcoming work described it: 'All editions on very fine paper, completely renewed with newly engraved copperplates and new, comprehensive descriptions.' (van der Krogt, p,43) Many of the most beautiful and desirable maps available to the modern collector were printed and bound in Blaeu's atlases. Willem's son, Joan, would go on to add further volumes to the Atlas Novus, concurrently printing new editions of the first two volumes with additional maps, in effect making these new editions an entirely new book. Under Joan there would be nine Latin editions, twelve French, at least seven Dutch, and two German. This exceedingly successful work would be the mainstay of the Blaeu firm until 1661, at which point the work was supplanted by Joan Blaeu's masterwork Atlas Maior in 1662.