1821 Thomson Map of Japan and Korea 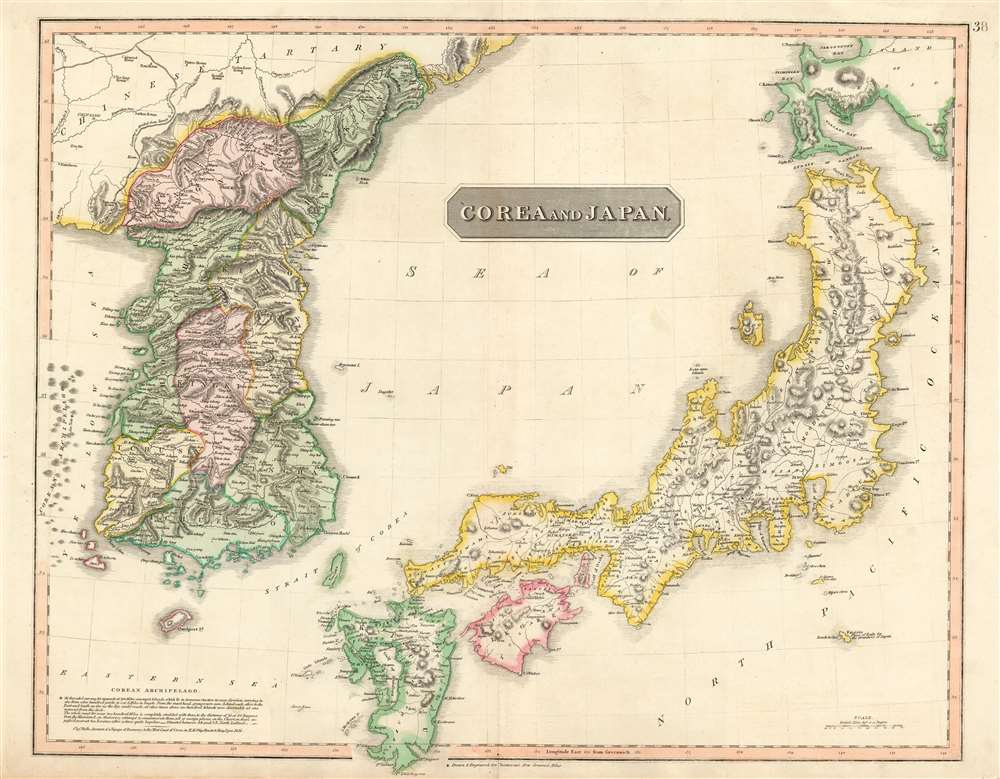 1821 Thomson Map of Japan and Korea

This is John Thomson's revised 1821 map of Korea and Japan. Both Korea and Japan are divided according to their constituent provinces with Hokkaido, identified as Jesso (Yesso), partially off the map. The island of Hachijo (incorrectly identified here as Fatsisio), just south of Edo Bay, is identified as a 'Place of Exile for the Grandees of Japan.' Although the Izu Islands were in fact used as convict settlements in the 18th century, Hachijo Island was not particular in that respect, nor was the social status of its criminals. A wall of wooden spikes dividing Chinese Tartary (today's Manchuria) from Korea is also noted. The sea between Japan and Korea, whose name, either the 'Sea of Korea' or the 'Sea of Japan,' is currently a matter of historical and political dispute between the two countries, is here identified in favor of Japan.

Changes to the 1821 Edition

Superficially, the 1821 version of this map lacks the Engravers' imprint, and the title is presented in a single line (as opposed to three lines, in the 1815.) The substance of the map is changed only in the waters to the west of the Korean Peninsula: in large part replacing the map's border between the 34th and 38th parallels, a 'Corean Archipelago' has been added in a pictorial fashion. The map includes an extensive textual note (from the account of an 1816 exploration) describing this expanse of tiny islands:

The whole coast for near two hundred miles, is completely studded with them, to the distance of 15 or 20 leagues from the Mainland, so that every attempt to enumerate them all or assign places on the Chart, on those we passed nearest to became after a time quite hopeless.

The whole is beautifully engraved in the minimalist English style pioneered in the early part of the 19th century. Thomson maps are known for their attractive color, generous size, and rich detail. Thomson's work, including this map, represents some of the finest British cartographic art of the 19th century. Relief is shown by hachure with towns, cities, and major topographical features identified.

This map was initially engraved in 1814 by J. and G. Menzies, and issued as Plate no. 34 for Thomson's 1817 issue of the New General Atlas. This revised issue was included as plate number 38 in the 1821 edition of the same work. Seven separate examples of the earlier state appear in OCLC, but only one copy of the 1821 has been so catalogued, at the Newberry Library. The atlas is somewhat better represented, with 17 examples of the earlier edition and three of the latter appearing in institutional collections.