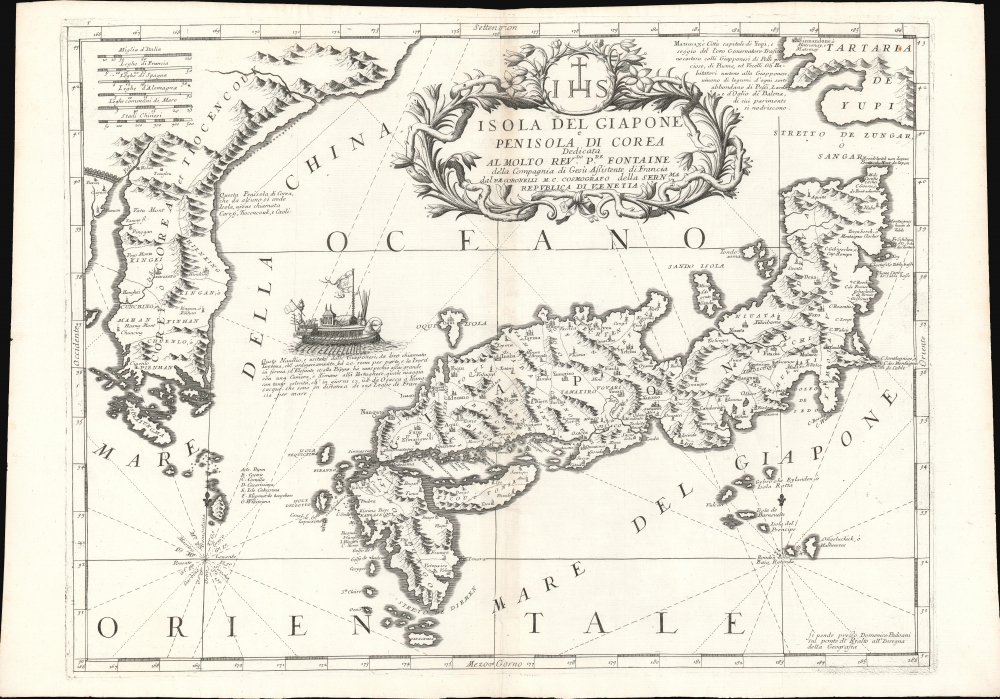 This is the 1692 Vincenzo Coronelli map of Japan and Korea. With bold engraving typical of Coronelli, this is among the most visually distinctive maps of the Japanese Islands produced in the 17th century. It, moreover, introduces unique new cartographic knowledge derived from the most up-to-date Jesuit sources.

Coronelli had access to Dutch sea charts, which he supplemented with material from French Jesuits, with whom he maintained strong connections - note the Jesuit sigil in the dedicatory cartouche. Jesuits were the only Europeans with access to firsthand knowledge of Japan, and so any mapmaker who wished to produce a credible map had to acknowledge their work. The coastlines are drawn based on the 1655 Martini map. A magnificent rowing galley - ascribed to the Japanese, but in reality Korean - plies the sea between Japan and the mainland.

This map appeared in Coronelli’s 1692 Corso Geografico Universale. Although also included in his 1697 Atlante Veneto, the lack of verso text on this example indicates it is from the earlier work. This edition of the map is cataloged separately only by Harvard, the Osher Map Library, and the Biblioteca Nacional de Espana. The Corso Geografico Universale is listed only in seven institutions in OCLC, with the Atlante Veneto being better represented.

Coronelli, V., Corso Geografico Universale (Venice), 1692.     The Corso Geografico Universale was a Venetian cosmographic atlas issued by the Jesuit Minorite friar, geographer, and globe maker Vincenzo Maria Coronelli. The Corso Geografico is generally dated to 1692 and is considered a follow-up to the Atlante Veneto. There is no confirmed collation of the atlas, as all editions were assembled ad-hoc. Also maps for the atlas were also sold separately, and to subscribers the rate of six cards a month for two years. The maps of the Corso Geografico are generally unique works of great historical value. They are also masterpieces of craftsmanship, engraved between 1688 and 1692 in the well-equipped cartographic workshop of the Saint Maria Gloriosa dei Frari Convent. Editions of the Corso Geografico can roughly be broken up as 68 maps 1689-92; 173 maps, 1692; 260 maps, 1694-97).