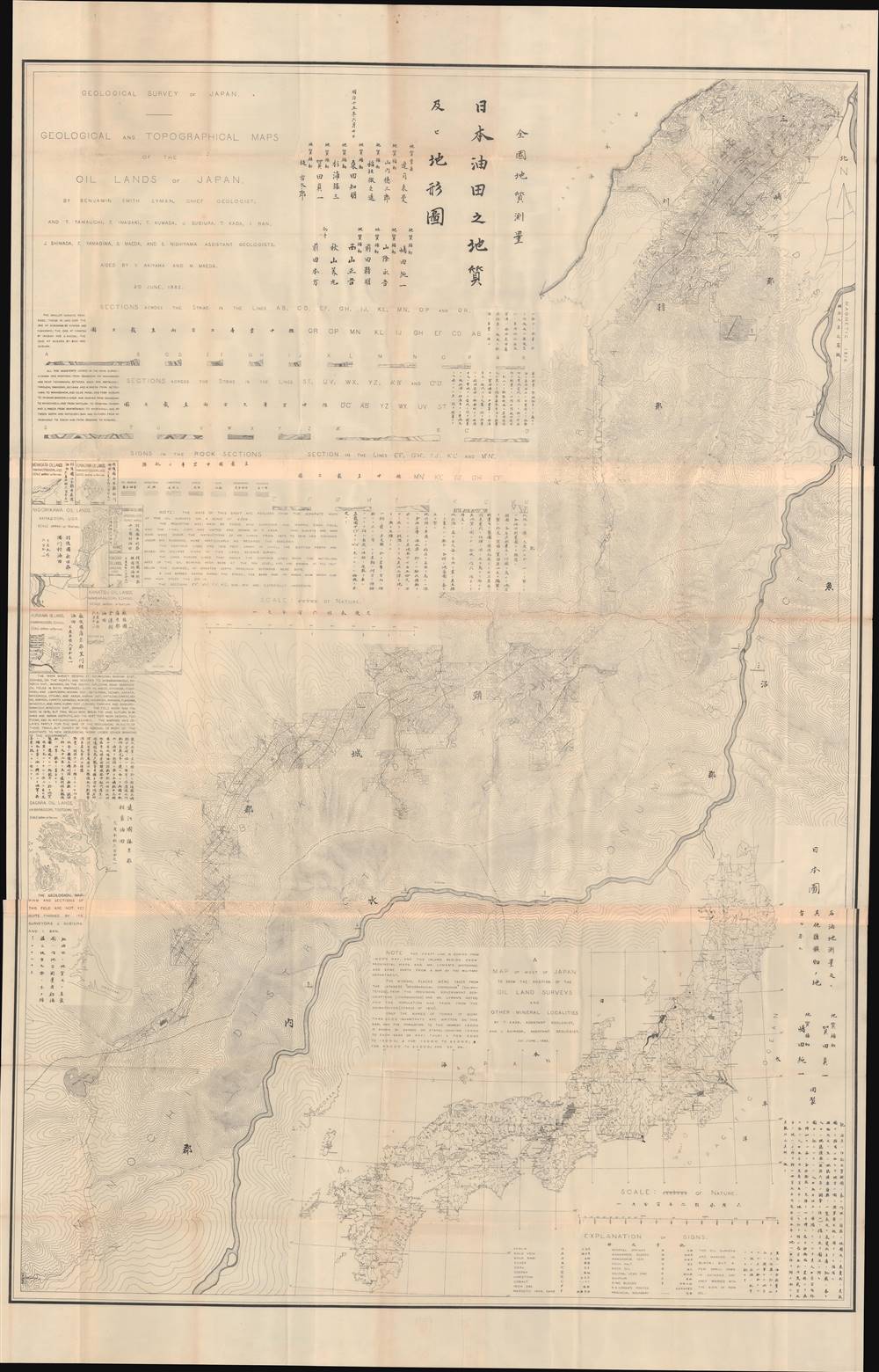 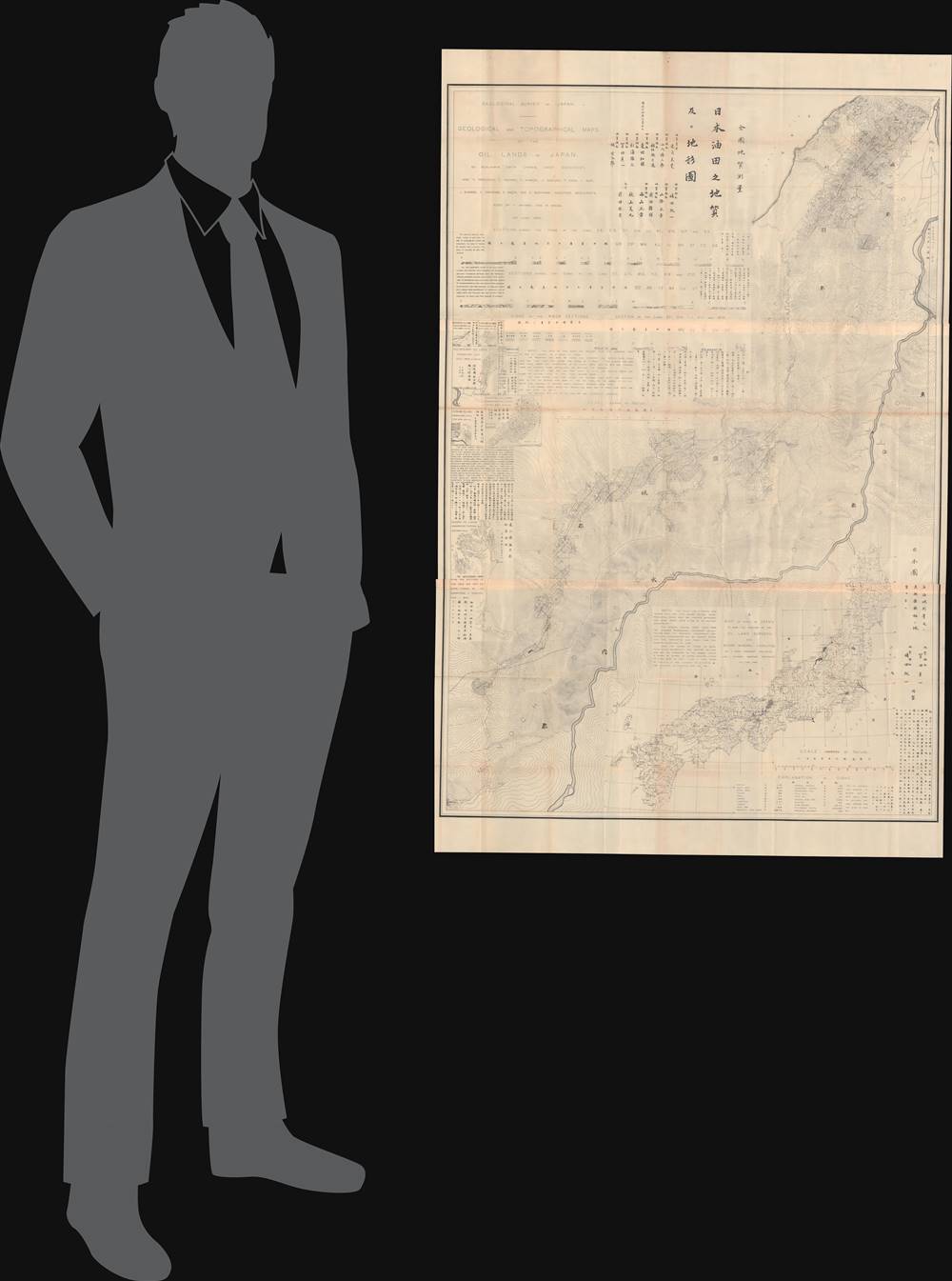 The resources behind Japan's militarization.
$1,600.00

This is an important 1882 bilingual map of Japan highlighting oil regions. It was issued in a unique 19th century Japanese-American collaboration spurred by the Meiji agenda to modernize, expand access to fossil fuels, and drive industrialization. It was prepared by the American geologist Benjamin Smith Lyman and a team of Japanese colleagues. The size of the map, its lack of publication information, and the high-level of technical underscore its purpose as internal government and industrial document.

The main map is of the area roughly between Nagano and Niigata, northwest of Tokyo, then the districts (郡) of Minochi, Kubiki, Kariha, Uonuma, and Mishima. This was the only region of significant oil reservoirs outside of Hokkaidō. At bottom-right is a map of Honshu, Kyushu, and Shikoku which shades the region focused on in the main map and situates it within Japan. There are eight inset maps at left showing areas with less significant oil reservoirs in Ugo Province (羽後國), Echigo Province (越後國), and Tōtōmi Province (遠江國). At top-left are explanatory notes on the representation of sections and type of rock, while a more general legend ('Explanation of signs') sits at bottom-right

Lyman was hired by the Japanese government in 1872 to survey areas of oil and coal deposits on Hokkaidō, then part of a northern frontier known as Ezo (蝦夷, often written as Yesso in Western sources). Prior to the 19th century, portions of Ezo and the Ainu people who lived there were under the loose control of feudal lords, but the size of the territory, the harshness of the climate and terrain, and the low population density meant that much of Ezo was beyond the reach of Japanese samurai and daimyo. When the Tokugawa government became concerned that Russia might seize Hokkaidō in the early 19th century, they became more interested in mapping and controlling the island.

When the Tokugawa fell, the Meiji government, even more aware of Japan's gap with Western powers, quickly imported foreign experts including Lyman to help develop mining and agricultural colonies on Hokkaidō. The island proved to be a font of resources necessary for Japan's industrialization, such as coal, timber, and arable land. The Hokkaidō Development Commission (開拓使, Kaitakushi) organized these efforts and brought in tens of thousands of migrants from other parts of Japan in a race to colonize it before it could be claimed by Russia.

These measures had the desired effect, but were devastating for the Ainu of Hokkaidō, who were forcibly assimilated and lost much of their traditional culture. During his long stay on Hokkaidō, Lyman, who was something of an amateur anthropologist of the Ainu, regularly worked with the Kaitakushi, though their relations were often strained.

Lyman and the Geological Survey of Japan

Lyman had already left Japan by the time this map was produced, but he and his Japanese colleagues had spent much of the previous decade surveying and writing reports about the allocation of fossil fuels and other natural resources in Japan, particularly Hokkaidō. Lyman's Japanese collaborators, including those involved in this map's production, were the first generation of Japanese geologists and natural resource surveyors trained in modern methods. They were instrumental in forming the Geological Survey of Japan (全國地質測量) in 1878 as an office in the Ministry of Home Affairs. Lyman encouraged the group's founding and formation, and donated his home to serve as their headquarters when he left Japan in 1879.

Japan and the Search for Resources

Like any modern, industrialized country, Japan's economic development has required the consumption of tremendous amounts of natural resources. Aside from coal, Japan does not possess significant fossil fuels and has long faced the problem of how to acquire energy resources and at what cost. These calculations were a major factor in Japan's turn to militarism in the early 20th century, the invasions of Manchuria and China, and the decision to launch a full-scale war against the United States and other Western powers in 1941. The same issues continued to bedevil Japanese governments in the postwar period. After the 2011 Fukushima Daiichi disaster, nuclear power became extremely unpopular, increasing reliance on fossil fuels, at least until renewable energy sources can be developed on a large scale.

This map was produced on June 20, 1882 by the Geological Survey of Japan, with Lyman credited as the Chief Geologist. It is held by the University of California Berkeley, Stanford University, Harvard University, the University of Toronto, the British Library, and the Muséum national d'histoire naturelle in Paris. It has no known history on the market.

Benjamin Smith Lyman (December 11, 1835 – August 30, 1920) was an American mining engineer, geologist, surveyor, and scholar in several fields, including Asian cultures and languages. After graduating from Harvard with a law degree, Lyman went to work with his uncle, who was the Director of the Geological Survey of Pennsylvania. His interest piqued, Lyman continued to work on geographic surveys in the United States, Europe, and eventually Asia. Lyman was hired by the Japanese government to survey Hokkaido with Japanese colleagues who went on to form the Geological Survey of Japan. Lyman stayed in Japan for six years and published several works on the Japanese language and Japanese culture. After returning to the U.S., he maintained an active scholarly life, publishing works about Japan, geology, moral philosophy, and vegetarianism, among other topics. Learn More...


Geological Survey of Japan (全國地質測量; 1878 - present) was originally an office within the Japanese government's Ministry of Home Affairs (内務省) and later other government ministries before becoming an independent organization (地質調査総合センター) in 2001. It its early years, it played an important role developing Japan's energy resources during the crash course of modernization during the Meiji era. It focused in particular on resource-rich Hokkaido (then known as Ezo, a term referring to Japan's entire northern frontier) and was closely affiliated with the Hokkaidō Development Commission (開拓使, Kaitakushi). Learn More...