1684 Tavernier Map of Japan and Vietnam 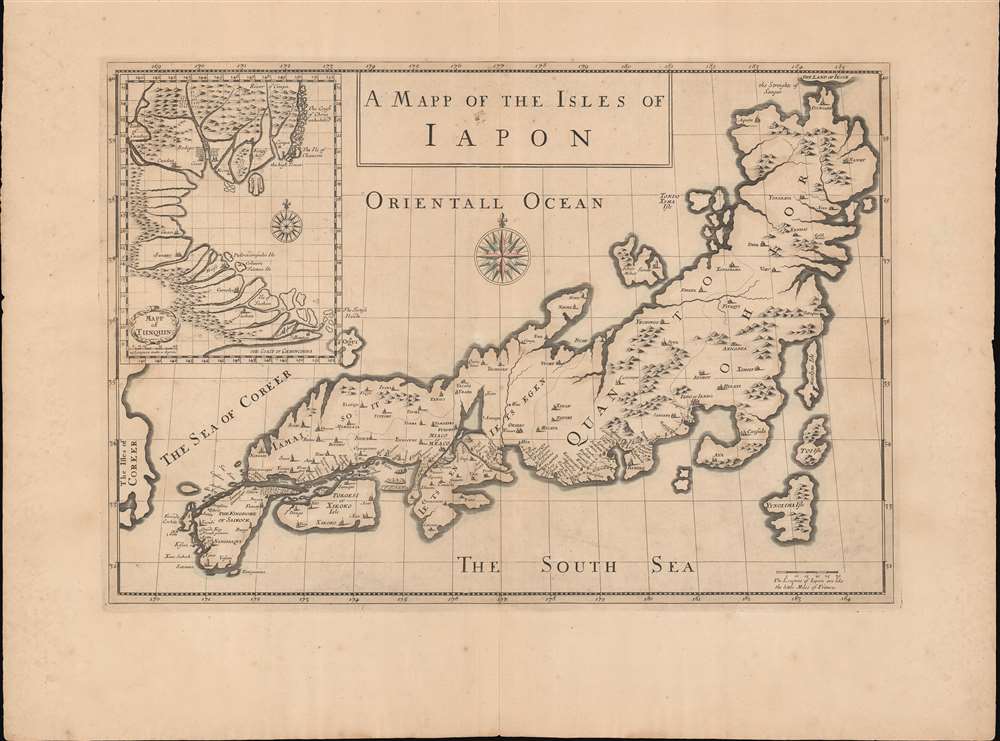 1684 Tavernier Map of Japan and Vietnam

An extremely rare work, this is the 1680 map of Japan and Vietnam (Tonkin) that accompanied the Moses Pitt edition of the travels of Daniel and Jean-Baptiste Tavernier. It is a seminal work, being among the first European maps of Japan (and Vietnam) based upon actual reconnaissance.

The primary map focuses on the Japanese island Honshu, and surrounding smaller islands. It includes a plethora of unique information, including numerous cities, notes on mines, topography, and more. It further illustrates the fifty-three stations of the Great Tōkaidō Road (東海道), a major artery between Edo (Iedo, modern-day Tokyo) and Meaco (都, Kyoto). At the westernmost edge of the map, Korea (Coreer) is recognizable across a short strait from the 'The Kindgome of Salkock, site of the Dutch East India trading company ports at Nagasaki (Nangisaqvi) and Kagoshima (Tanegaxima)'. The sea between Japan and Korea is labeled 'Sea of Coreer'.

The sea between Japan and Korea, whose name, either the 'Sea of Korea,' 'East Sea,' or the 'Sea of Japan,' is here identified in favor of Korea ('Sea of Coreer'). Historically, Korea has used the term 'East Sea' since 59 B.C., and many books published before the Japanese annexed Korea make references to the 'East Sea' or 'Sea of Korea.' Over the centuries, neighboring and western countries have identified Korea's East Sea using various terms. The St. Petersburg Academy of Sciences referred to the East Sea as 'Koreiskoe Mope' or 'Sea of Korea' in their 1745 map of Asia. Other seventeenth and 18th century Russian maps alternate between 'Sea of Korea' and 'Eastern Ocean.' The 18th century Russian and French explorers Adam Johan von Krusenstern and La Perouse called it the 'Sea of Japan,' a term that became popular worldwide. Nonetheless, the last official map published by the Russians name the East Sea the 'Sea of Korea.' The name is currently still a matter of historical and political dispute between the countries.

The large inset in the upper left is based upon Daniel Tavernier's travels to the court in Hanoi. The map covers the coast of Vietnam from southern China to the Mekong Delta. It includes parts of modern-day China: the Island of Hainan and the Chinese coast roughly as far north as modern-day Hong Kong and Macau. It represents a major milestone in the mapping of Vietnam.

At the time, the Gulf and Kingdom of Tonkin was almost entirely unknown to Europeans. The Portuguese (based in Macao) and later the Jesuits established trading and missionary relations with the rival Champa Kingdom (near modern day DaNang in Central Vietnam), but due to political tensions between North and South Vietnam (Champa and Tonkin, respectively), did not initially venture further north. In fact, the island marked on this map, 'Polociampeilo' is the northernmost point of Portuguese exploration and the marker by which earlier rutters directed navigators to turn northeast, bypassing the Gulf of Tonkin entirely, en route to Macao. The major North Vietnamese city, Bodego (Hanoi) is noted. As is the central highland range that divides the 'civilized' coastlands with the supposedly barbarous tribal peoples.

This map was prepared in 1680 for publication in Moses Pitt's English edition of A Collection of Several Relations and Treatises Singular and Curious, of John Baptista Tavernier. The book, first published in France in 1679, was a kind of sequel to the more famous Les Six Voyages de J. B. Tavernier (2 vols., Paris, 1676). It contained additional voyages not included in initial work, including a trip to Japan, and the present map.

Jean-Baptiste Tavernier (1605 - 1689) was a French gem merchant, traveler, and adventurer active in India and East Asia in the middle part of the 17th century. Tavernier was born in Paris of a French or Flemish Huguenot family that had emigrated to Antwerp, to escape persecution, and which subsequently returned to Paris after the publication of the Edict of Nantes, which promised protection for French Protestants. Tavernier had a family connection to mapmaking as both his father Gabriel and his uncle Melchior were cartographers and engravers. Nonetheless, despite a natural talent for drawing and engraving, he had an insatiable wanderlust and instead traveled independently to India and Asia where he made his fortune in the gem trade. Tavernier made a total of six voyages to Persia, India, and Asia between 1630 and 1668. Tavernier is best known for the discovery/purchase of the 116-carat Tavernier Blue diamond that he subsequently sold to Louis XIV of France in 1668 for 120,000 livres, the equivalent of 172,000 ounces of pure gold, and a letter of ennoblement. (Five years later, Louis had his court jeweler Jean Pitau recut the stone into the 68 carat French Blue and had it set as a hatpin. The gem was reset by his great-grandson Louis XV in The Medal of The Order of the Golden Fleece, stolen in 1792, and was recut and re-emerged in London 30 years later as The Hope Diamond). A wealthy man from his adventures, Tavernier acquired the Barony of Aubonne, and settled into a life of leisure wherein, to occupy himself he published a narrative of his voyages, along with two maps, as Les Six Voyages de Jean-Baptiste Tavernier (1676). Tavernier died in Moscow in 1689, at the age of eighty-four. There is a persistent and most likely false legend that he died from being torn apart by wild dogs as a result of a curse on the Tavernier Blue (Hope Diamond). He one of three brothers of the French merchant adventurer Daniel Tavernier who also made numerous voyages to East Asia. Learn More...


Daniel Tavernier (c. 1610 – September 10, 1648) was a French adventurer and merchant active in East Asia during the first half of the 17th century. He was born in Antwerp of a French or Flemish Huguenot family which subsequently returned to Paris after the publication of the Edict of Nantes, which promised protection for French Protestants. Daniel is an older brother of the more famous Jean-Baptiste Tavernier (1605 - 1689), who discovered the Tavernier Blue Diamond (Hope Diamond) and pioneered East Asian trade. Daniel is known to have made 11 or 12 voyages to Tonquin (North Vietnam) from Batavia in the Dutch East Indies. Having settled in the Dutch port of Batavia, he preceded Jean-Baptiste to East Asia by at least 10 years. Daniel's presence in Batavia probably inspired Jean-Baptiste to travel there on his second voyage. Daniel probably served as a guide for Jean-Baptiste on his voyage, which included a stop in Vietnam. Daniel Tavernier died in Batavia of dysentery on September 10 of 1648. He never published in his lifetime, but a map either drawn by him, or based upon his journals, was published by his brother, Jean-Baptiste, in 1679. Learn More...


Moses Pitt (c. 1631 - 1697) was one of the largest British book publishers, printers, and booksellers of the second half of the seventeenth century. A very ambitious man who's plans eventually led to bankruptcy, Pitt was a small bookseller and publisher before he embarked on some enormous, very expensive, ventures. The largest was the 'English Atlas', which he intended to contain 900 pages of text and 600 plates in eleven volumes, and partnered with Jan Jansson's heir Johannes Waesberger. The first volume was published in 1680, but rising costs contributed to only four volumes being published. Pitt's ambitions did not stop him there, as he began a huge property speculation scheme in Westminster and took over the printing office of Oxford University. By 1685, however, he was forced to sell of much of his stock at auction, which marks the end of his print publishing. His final bankruptcy and arrest for debt happened in 1689 and he spent the following eight years in prison, only to be released shortly before his death. Pitt published The Cry of the Oppressed: Being a True and Tragical Account of the Unparallel'd Sufferings of Multitudes of Poor Imprison'd Debtors In Most of the Gaols in England, an appeal on behalf of people imprisoned for debt, in 1691. Learn More...

Tavernier, D., A Collection of Several Relations and Treatises Singular and Curious, Of John Baptista Tavernier, Baron of Aubonne. Not Printed Among His First Six Voyages, (London: Moses Pitt) 1684.