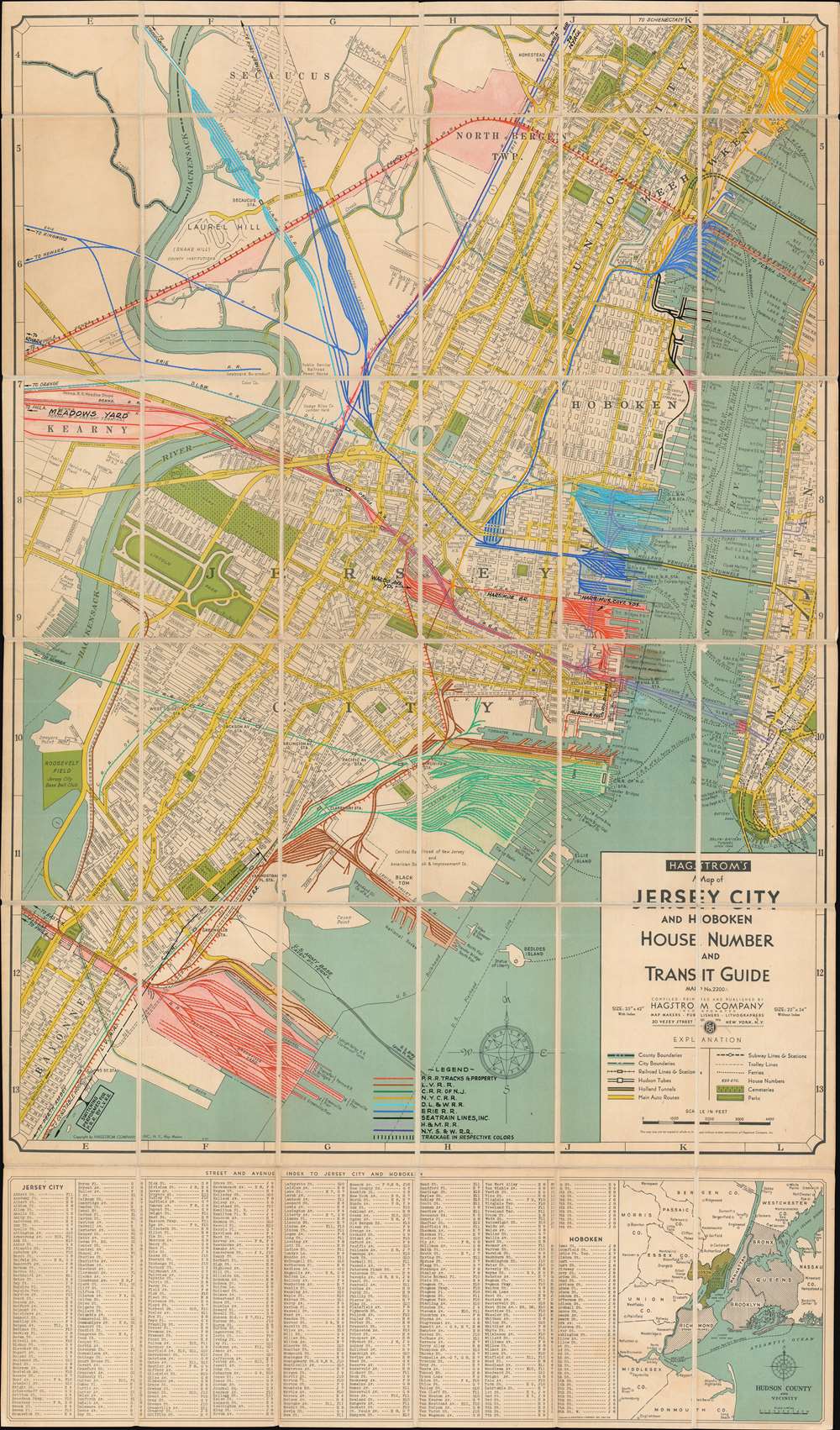 This is a c. 1939 Hagstrom city plan or map of Jersey City and Hoboken, New Jersey, featuring manuscript notations highlighting the region's railroad network. The map depicts from the Pennsylvania Railroad freight terminal west of the Hackensack River to the western side of Manhattan and the Battery and from Union City to Bayonne. Streets are illustrated throughout, including the Lincoln Tunnel and the Holland Tunnel, with city parks, fields, and water reservoirs also labeled. Roosevelt Field, opened in 1937, was home to the minor league baseball team the Jersey City Giants. A street index for Jersey City and Hoboken is included below the bottom border, along with a small map of Hudson County and the vicinity.

Rail lines operated by nine different railroad companies are highlighted in manuscript, with different colors used to allow for easy differentiation between them. A legend situated along the bottom border explains which color is associated with which company, with the Pennsylvania Railroad at the top. Colored in red, the Pennsylvania Railroad possesses what appears to be the largest network in the area. Other railroads highlighted here include the Lehigh Valley Railroad, the Central Railroad of New Jersey, the New York Central Railroad, the Delaware, Lackawanna and Western Railroad, the Erie Railroad, the Hudson and Manhattan Railroad, and the New York, Susquehanna and Western Railroad. Seatrain Lines, Inc., an international shipping company, also operated a small railroad near their docking facilities in Hoboken.

Only two railroads, the Pennsylvania (red) and the Hudson and Manhattan (light purple), operated tunnels across the North (Hudson) River. The Hudson and Manhattan completed their tunnels between Hoboken Terminal and 19th Street in Manhattan in 1908, two years before the Pennsylvania Railroad began running traffic through their North River Tunnels to the newly constructed Penn Station on 34th Street. As these two companies were the only two operating tunnels under the North River, most of the others operated ferries out of terminals along both banks.

Very good. Dissected and mounted on linen in thirty-six (36) panels.
Looking for a high-resolution scan of this?