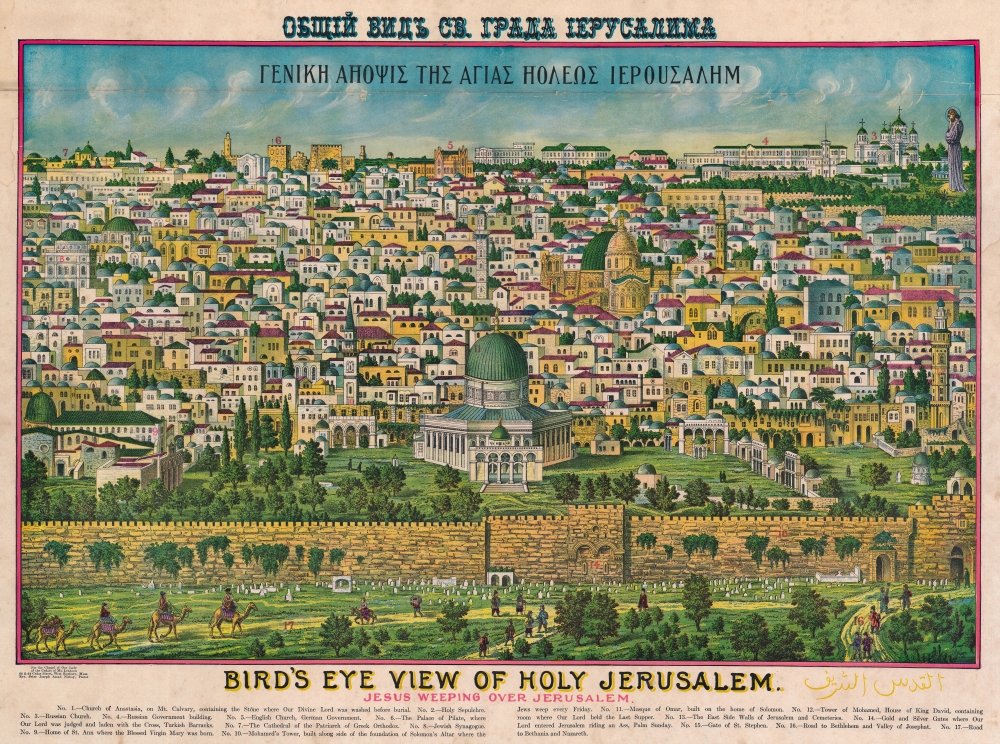 A rare example of Rand McNally's 1900 chromolithograph view of Jerusalem. Although here unattributed, this view is a revised version of an earlier view issued in 1896 by the Palestinian / Syrian immigrant Aece Hage. Sometime after Hage's original printing, the view was acquired and revised by the Rand McNally Company, who updated and 'Christianized' it, adding a figure of Jesus in the upper right. They published from about 1900 both on their own account, and to order - in this case for the Chapel of Our Lady of the Cedars of Mt. Lebanon in West Roxbury, Massachusetts. The map is titled in Greek and English. Aece Hage's own title, in Arabic, also appears at bottom right. Text below the view identifies 17 locations, which correspond to numerical assignments. The cartographer identifies Christian, Muslim, and Jewish religious sites.

This view is a veritable masterpiece of chromolithography, employing at least six separate plates, a feat even more remarkable when compounded by the fact that this view was initially produced in a flophouse under extenuating circumstances and on a low budget. The unusual view looks on Jerusalem from the Mount of Olives, east of the Old City, and centers on the Temple Mount and the Dome of the Rock (Qubbat al-Sakhrah), with other holy sites of multiple religions appearing behind it. In the foreground the Eastern Wall of Jerusalem, the walled-off Golden Gate, the open Lion's Gate, and the 1400-year-old Bab-ur-Rahmah Cemetery are illustrated. The view, although stylized, is mostly accurate, suggesting that Hage (or the artist) had been to or lived in Jerusalem and drew the image from life.

Temple Mount, occupying the center of the image, is considered one of Holiest places in the world and is a major pilgrimage site for all three Abrahamic religions: Judaism, Christianity, and Islam. All three religions venerate this site as the location where the Prophet Abraham stood ready to sacrifice his son Isaac. It was subsequently the site of both the First Temple (destroyed 587 BC) and Second Hebrew Temple (516 BCE - 70 CE). Muslims believe that it was from this place that Mohammed ascended bodily to heaven - leading to the construction of the Dome of the Rock (constructed 691-92 CE).

The view includes most of the walled Temple Mount compound. The Dome of the Rock stands dominantly at center, Al-Aqsa Mosque is on the left (green roof), with the small blue roofed Cupola of the Chain situated just in front of the larger Dome of the Rock. The Western Wall, or Wailing Wall, holy to the Jewish faith, is not directly visible, but the Eastern Wall, the oldest of the visible walls around the temple mount, dating to the Herodian Period (73 BCE - 4 BCE), appears front and center.

The first wave of Arab immigration in the United States occurred between 1889 and 1914, mostly from the province of Ottoman Syria, which occupied all of today's Israel, Palestine, Lebanon, Syria, and Jordan. Hage was most certainly part of this group. While most of the 900,000 or so immigrants were Arab Christians, a minority percentage were Arab Muslims and Druze. Early immigrants settled mainly in New York and Boston. This first wave of Ottoman Syrian immigration to the United States was predominantly male, and immigrants considering themselves in Islamic the tradition of al-Nizaleh, or sojourners. Most established small business or became peddlers - like Hage, who owned a cookware store as of 1896. This wave of immigration continued until the Immigration Act of 1924 established a quota system, limiting all foreign immigration.

Published about 1900 by Rand McNally - the view is here unattributed, but we note a near identical example at the Leonard and Juliet Rothman Holy Lands Map Collection which bears the Rand McNally imprint, and date. We also are aware, from our own collections, of the original production by the Arab immigrant, Aece Hage. Hage originally engraved and published this view around 1896. The address listed on the 1896 edition's imprint, 35 Edinboro Street, was at the time a boarding house of ill repute - possibly one of the few places available to the Arab immigrant. This Rand McNally variant uses the original chromolithographic stones, but here has been revised considerably to accommodate more Christian locations, adds Jesus, and a Greek title. We are aware of but 3 surviving examples of this Rand McNally edition, and only one known example of the original Aece Hage publication.

Aece Hage (fl. c. 1890 - 1900) was an Arab businessman and shop owner active in Boston in the late 19th century. Little is known of Hage, but one incident, appearing in the Boston Globe (Dec 19, 1896), describes him as the owner of a 'smallware' or 'pot and pan' store at 332 Federal Street. It goes on to describe him as an 'Assyrian.' Although today Assyria generally refers to parts of present-day northern Iraq, southeastern Turkey, northwestern Iran, and western Syria; in this case, it is a reference to the Ottoman province of Greater Syria, including all of Israel, Palestine, Jordan, Lebanon, and Syria. In the late 19th century a wave of Arab Christian, Arab Muslim, and Druze immigrants, most from Palestine and Syria, came to the United States seeking a better life. Many, like Hage, established small businesses, considering themselves al-Nizaleh, or sojourners. The Boston Globe article in question, the only reference to Hage we have found, describes a robbery in which Hage was burgled of 40 USD by a fellow 'Assyrian', Nasim M. Asseese. The short article further notes that both Hage and Asseese were 'locked up.' Learn More...

OCLC 993090548. Stanford Univeristy, The Leonard and Juliet Rothman Holy Lands Map Collection, 11543728.
Looking for a high-resolution scan of this?