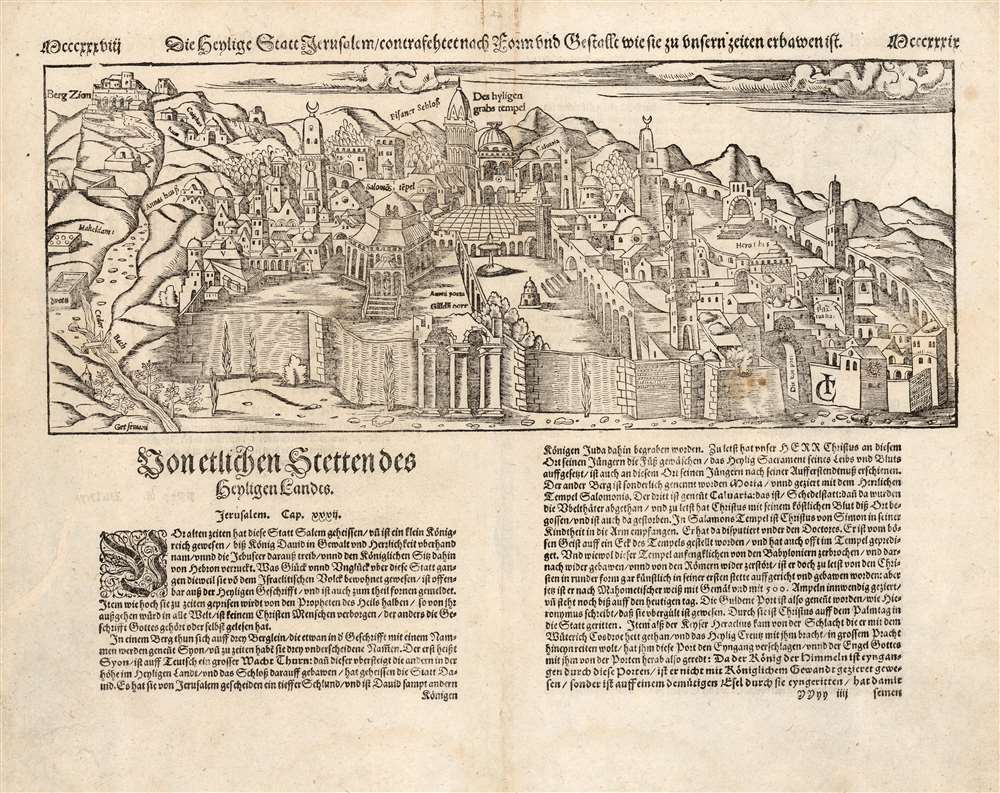 One of the earliest contemporaneous depictions of the city of Jerusalem.

One of the earliest printed views of Jerusalem, executed in woodcut by Jacob Clauser for Sebastian Munster's Cosmographia, from a 1598 German edition. Unlike most early depictions, this bird’s-eye view is not a purely retrospective depiction of the ancient city, but rather a modern view, showing the city at the time of publication. As explained in the view's title, it is meant to depict the Holy City in the 'form and shape as it was built in our times'. In its initial 1550 printing, this was one of the earliest contemporaneous images of the city.

The map is the design of a devout Christian, and so many of the features emphasized would be of primary interest to Christian pilgrims, whether actual or armchair travelers. Named are Mount Zion, the Church of Saint Anne, and King David's Tomb. The temple of the Knights of the Holy Sepulchre is shown. The court of Pilate, the palace of Herod, the Garden of Gesthemane, and the Akeldama are also marked. At the time, Jerusalem was occupied by the Ottoman Empire. As such, the Dome of the Rock is depicted centrally, and is clearly a mosque, but retains the name of the 'Temple of Solomon'. The whole of the city is embraced by its ancient walls, with several of its iconic gates named.

Munster's Cosmographia Universalis was published in German in 1544, the first of many editions. Most of the city views associated with the Cosmographia were not added until 1550, including the present view of Jerusalem by Jacob Clauser. The present example conforms typographically to the 1598 Cosmographia, published by Sebastian Petri. Munster's work was extremely popular, running to over fifty thousand copies over a long printing history. The book is well represented in institutional collections, and examples of its individual sheets occasionally appear on the market, often in widely varying condition.