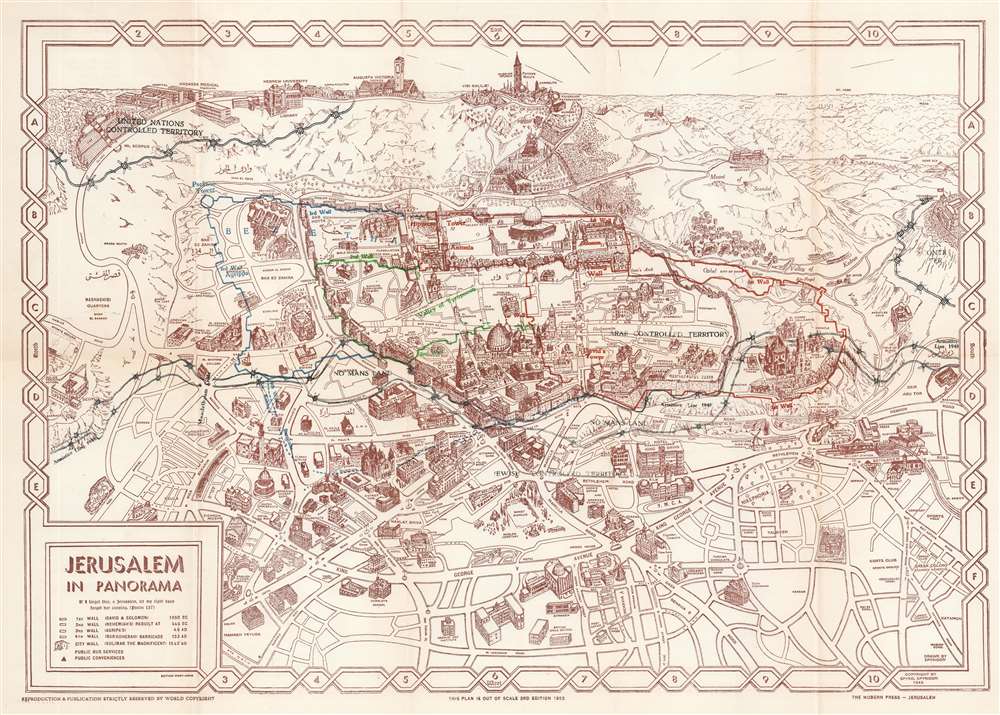 This is a 1953 Spyro Spiridon (Spyridon) pictorial map of Jerusalem. Spiridon's map illustrates sites across the city in profile, including schools, hospitals, churches, synagogues, hotels, and even the Y.M.C.A. The Dome of the Rock, the Wailing Wall, the Church of Dormition, and the Old City's walls are prominent. The Dead Sea appears along the upper right border.

Following the 1948 Arab-Israeli War, Jerusalem was divided between Jews and Arabs. Spiridon illustrates this division with overprinted lines of barbed wire. These barbed wire lines are labeled 'Armistice Line 1948' with 'No Man's Land' appearing between the two. One side is labeled 'Arab Controlled Territory' and the other is identified at 'Jewish Controlled Territory'. Two enclaves are marked as 'United Nations Controlled Territory', the Hassada Hospital and the Hebrew University in the upper left; and the Government House along the right.

The 'Green Line' agreement was never meant to signify permanent international borders, only a temporary demarcation between Israel and Jordan following the 1948 Arab-Israeli War. The 'Green Line' extended through Jerusalem, dividing the city into East Jerusalem, part of the Kingdom of Jordan, and West Jerusalem, the capital of the newly created State of Israel. When the ceasefire was declared, an Israeli and Jordanian commander met in an abandoned house to outline the boundaries of the ceasefire. The Israeli commander used a green wax pencil to outline Israeli-controlled positions, while the Jordanian commander used a red pencil to outline positions under Jordanian control, with the area between the two lines becoming a No Man's Land. Neither commander believed that this informal agreement represented anything more than a temporary ceasefire line, meaning that little notice was given to inaccuracies and errors included in their work due to the thickness of the pencils, deviations in the drawings, or segments of discontinuous lines.

Later, during the summit in Rhodes to hammer out the 1949 Armistice Agreements, the map was found to be the only official document indicating a line dividing Jerusalem upon which both parties agreed. Thus, the inaccuracies transitions from an informal ceasefire agreement to a binding international border. Neighborhoods, streets, and individual houses became points of contentious international dispute. The border quickly became fortified, with military positions springing up and landmines deployed in the No Man's Land. Included in this agreement was an Israeli-controlled area on Mt. Scopus. A bi-weekly convoy to the Israeli enclave on Mt. Scopus crossed the border between the two states through the Mandelbaum Gate.

First printed in 1945, Spiridon presents the three ancient walls of Jerusalem in different colors: red, green, and blue. Each wall is labeled, with the first appearing in red, the second in green, and the third in blue. Spiridon claimed that this was the first map to represent the walls in this manner, and defended his depiction of the walls by citing ancient sources .

This map was drawn by Spyro Spiridon and published in 1953 by the Modern Press in Jerusalem. The present edition does not appear in OCLC, however the 1945 and 1955 editions appear in that database.

Spyro N. Spiridon (also spelled Spyridon) (1894 - 19xx) was a Jerusalem-born engineer and cartographer. Spiridon studied electrical and civil engineering in Switzerland in his twenties and was exposed to the types of pictorial tourist maps that were popular there. After returning to Jerusalem, Spiridon had difficulty making ends meet with jobs in his chosen field, so he changed tactics and created a pictorial tourist map of Jerusalem. Spiridon's first map, published in 1930, was one of the first tourist maps of Jerusalem to employ the vignette-style views of buildings to mark popular tourist sites. He then published a panorama of Jerusalem, with editions of this map appearing in 1945, 1948, and 1953 at the very least. Learn More...

Very good. Closed margin tears professionally repaired on verso.
Looking for a high-resolution scan of this?