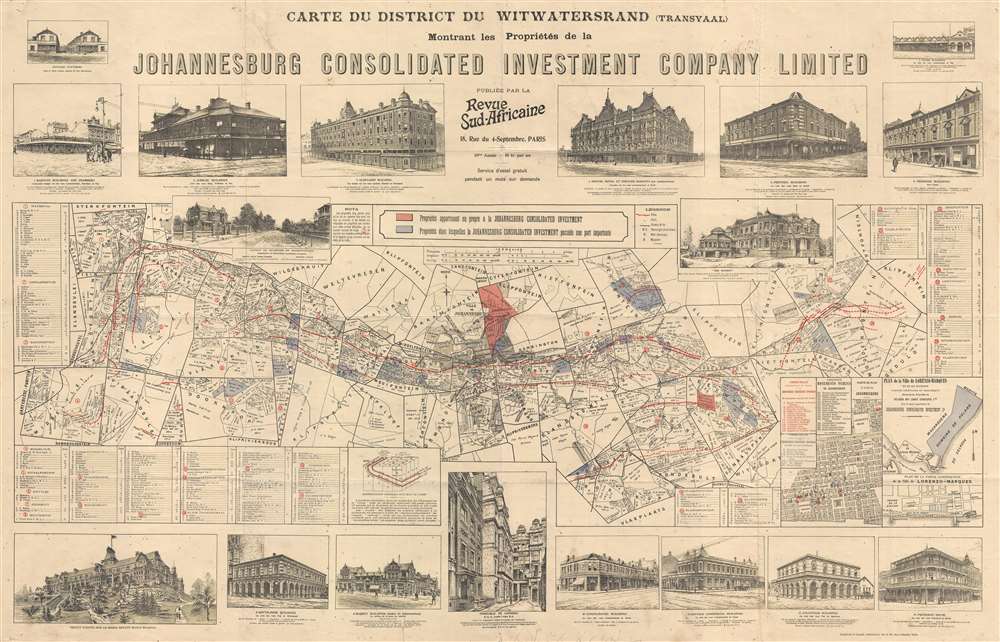 One of the earlist maps of Johannesburg, South Africa, used after the Second Boer War to promote investment in the Witwatersrang gold region.
$1,500.00

This is a rare 1902 map of Johannesburg, South Africa, prepared for Johannesburg Consolidated Investment (JCI) to promote investment among the French. This map is centered on the modern center of Johannesburg and extends from Waterval to Guduld. Highlighting illustrates the Witwatersrand Gold Reef as well as properties owned in full (red) and part (blue) by the randlord Barney Bernato and his company, JCI. Surrounding illustrations highlight extant and proposed developments by JCI and are clearly intended to advocate for the wealth and commodiousness of life in the region. Cartographically the map is derived from, but considerably advanced over, Charles Sydney Goldmann's 1895 map of the Witwatersrand Gold Region published in the early days of the Gold Rush.

This map was issued at the end of the Second Boer War (Oct 11, 1899 – May 31, 1902), itself a devolution from the 1886 Witwatersrand Gold Rush. The Boers, who then dominated the region, were mostly farmers, and few had the technical skills to exploit the newly discovered mines. Nonetheless, word got out of the gold discovery. When the wealth of the Witwatersrand Reef was fully understood, thousands flocked into the region creating the largest gold rushes in history. British diamond magnates, including Cecil Rhodes and JCI's founder Barney Bernato, maneuvered to seize control of the Witwatersrand Gold and its massive potential wealth. Measures, in the form of taxation and other restrictions, were taken by the Boer government to prevent control of the region from falling to the foreigners, or uitlanders, as they were known among the Boers. These tensions eventually led to the disastrous Jameson Raid and the Second Boer War. The mines were shut down and the British and Boers threw themselves at one another with a vengeance.

By the end of the Second Boer War the region, now firmly in British hands, was utterly devastated by the scorched earth policies embraced by both sides. With the mines nonetheless scheduled to reopen, massive investment in infrastructure to support the reviving mining industry was necessary. Much of the pressure for new development fell to the randlords, like Bernato and Rhodes, who had both the capital and connections to foster major development. They raised funds and encouraged immigration into Johannesburg, developing shopping centers, adding electrical street lighting, railroads, sprawling grand hotels, and elegant mansions. This was the founding of modern Johannesburg, which soon became the largest city in South Africa, eclipsing Cape Town.

The present map was issued in France by Bernato's company, the Johannesburg Consolidated Investment Company and La Revue Sud-Africaine to encourage investment in the region. The present map was issued in Paris, in French, and is clearly focused on developing a French investment base. Why Bernato chose to focus on French, rather than British investment is unclear. It is possible that it was attempt to edge in on his competitor, sometimes partner, and general nemesis, Cecil Rhodes, who received financing from the French Rothschild family. What is certain is that there was considerable investment interest in France. As early as 1893, there were several million shares of major South African mining companies in French portfolios. Henry Dupont published a regular journal La Revue Sud-Africaine, which focused exclusively the British controlled South African mining industry and was in fact, one of the co-publishers of this map.

Langonnet et Langlet (fl. 1885 - 1903) was a French firm established by the draughtsmen Langonnet et Langlet, who became partners in 1885. They created a special studio, which allowed them to produce more work than if they had worked on their own. They moved around Paris several times: from the Rue de Lancry to the Faubourg-Saint-Martin, before finally setting up shop at 124 and 126 Rue Lafayette in 1894. By 1900, they had fifteen draughtsmen working for them. Besides reproducing etchings, they also produced drawings meant to be reproduced by photo-lithography, helio-zincography, photogravure, and simili-gravure. The firm produced few maps, but did issue several important maps for the Revue Sud-Africaine and at last one of the Kondike gold region. Learn More...