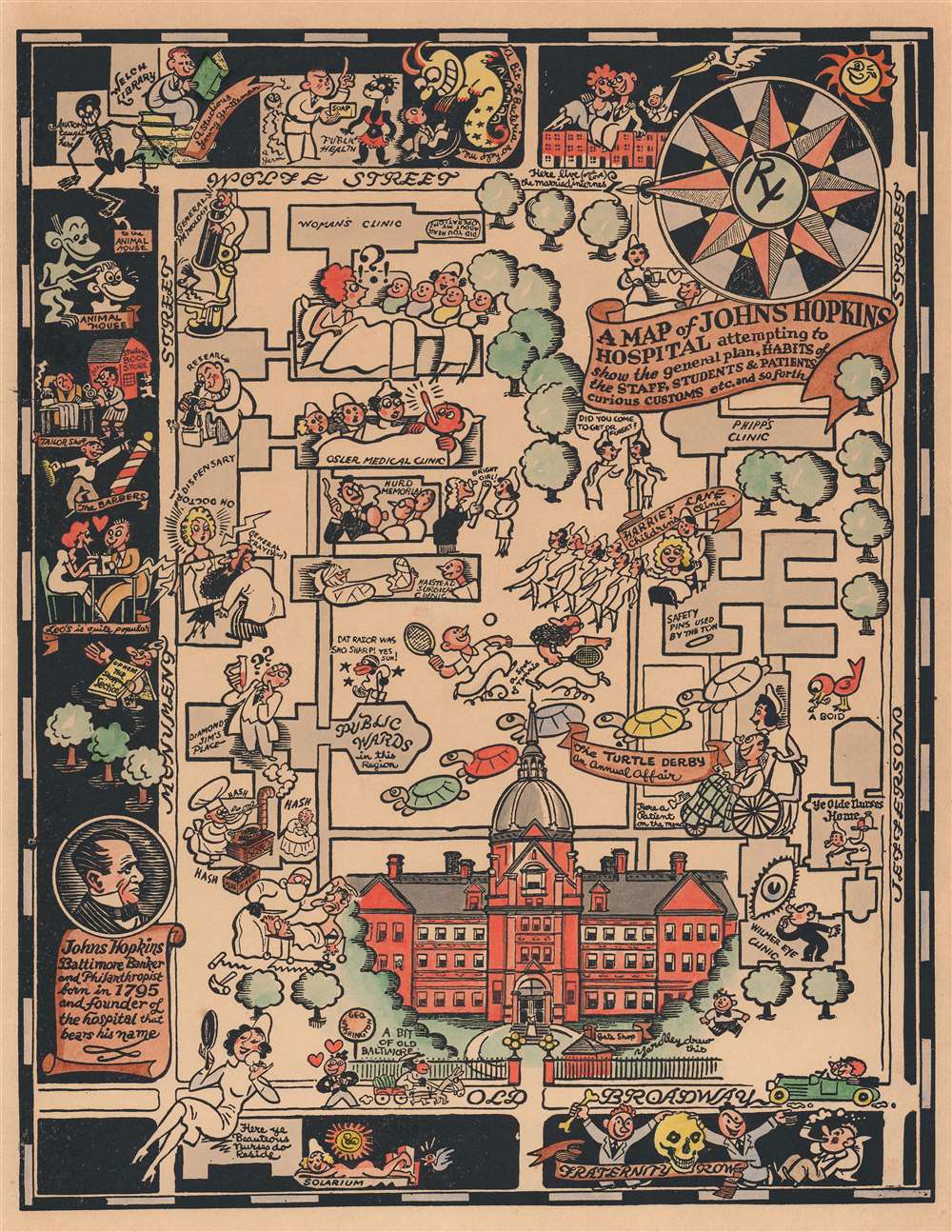 One of the founding institutions of modern American medicine.
$750.00

This is a 1935 Richard Q. Yardley pictorial map of Johns Hopkins Hospital in Baltimore, Maryland. A fantastic illustration of the original Administration Building occupies the lower portion of the map and immediately draws the eye. From there, the hospital's various wards, clinics, and buildings are illustrated. Many of the illustrations are comical in nature. A researcher standing atop a large microscope is mocked by a germ in the General Pathology Department, while a researcher stares at question marks under a microscope in the research lab. Three nurses are shocked by a patient's temperature in the Osler Medical Clinic and a 'patient on the mend' watches the annual Turtle Derby. (The Turtle Derby was still an annual event as of 2015. It began in 1931 as a way to entertain the children at the Children's Clinic.) A surgeon to the right of the Administration Building attempts to operate on a shocked patient with a large knife. A pictorial border surrounds the hospital's campus on three sides and identifies local hangouts, shops, and other buildings related to the university, including Welch Library and Fraternity Row. 'A studious young gentleman' sits atop a pile of books near Welch Library, while a young couple awaiting a baby brought by a stork marks housing for married interns.

While satirical in nature, some of Yardley's jokes have not aged well, many of which are sexist and/or racist. On the left, a doctor stares at the x-ray of a female patient's torso as she exclaims, 'Oh Doctor!'. Another joke involving nurses appears just below the title when one nurse asks another, 'Did you come to get or forget?' In the lower-left corner of the border, the nurse's quarters are marked by a primping nurse and the phrase, 'Here ye Beauteous Nurses do Reside' and next door a nude nurse lounges in the solarium, much to the shock of a passing bird.

This map was created by Richard Q. Yardley and published in 1935. We note a single cataloged example (David Rumsey Map Collection). This map is very rare on the private market, as we note only two other instances when it has appeared.