1894 Lake Map of Johor, Malaya and Singapore - the First Survey of Johor 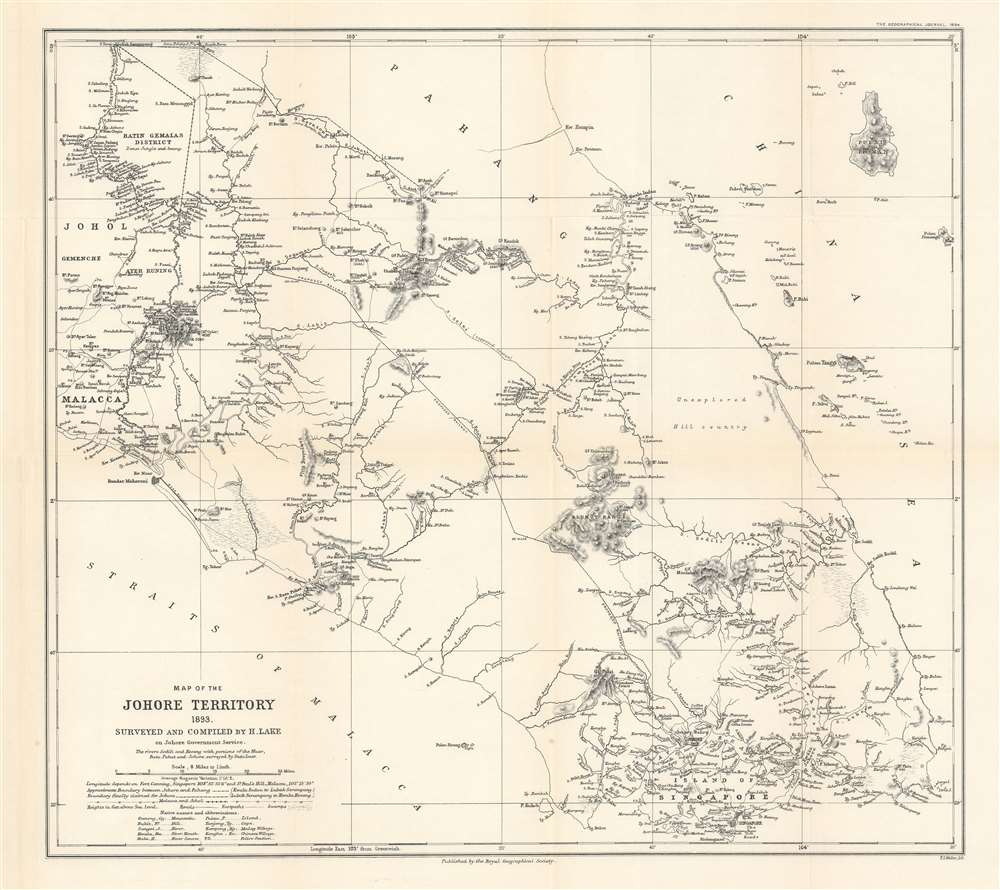 1894 Lake Map of Johor, Malaya and Singapore - the First Survey of Johor

This is an 1894 Harry Lake map of Johor (Johore), Malaysia. The first scientifically executed survey of the state, the map depicts the region from Malacca and Johol to the South China Sea and Pulau Pemangil and from Pahang to Singapore. Executed over the course of two years, Lake did his utmost to create a detailed survey of the state. Detailed illustrations of the rivers are present and mountains throughout the region are illustrated and labeled with elevations given as well. Supposed courses of rivers are also included, as is the route of a proposed railway. Because of references in the map's title and in Lake's paper, it is known that he was an 'Engineer in Service of the Sultan' but little more is known about him.

To the modern eye, the idea of this map representing the first scientific survey of Johor may be shocking, since so little detail is provided apart from the rivers and the mountain peaks. Lake addressed this aspect of his work in the paper he read to the Royal Geographical Society

Owing to the dense jungle. Survey work in Malaya is a most tedious and trying affair. It is impossible to do much traversing with the theodolite, and a systematic triangulation in such a wild country is at present out of the question. I therefore contented myself by fixing a number of prominent peaks and hill-tops by a series of astronomical observations, and then filling in the small tracts of surrounding country by prismatic compass; where the country was moderately open, the plane table was used. By these means the whole of the territory was mapped within two years. This work, while it does not pretend to the accuracy of a regular triangulation is, I think, sufficiently reliable to serve all practical purposes for some years to come. The heights were in most cases determined by aneroid barometer, and may be regarded as approximate only. Mounts Ophir, Janing, Pulai, and a few others were, however, determined by a careful series of boiling-point observations.

The map is thus incredibly significant in the history of south Malay peninsula cartography.

This map was created by Harry Lake, lithographed by F.S. Weller, and published by the Royal Geographical Society in 1894. The OCLC records examples as being part of the collections at the University of Chicago, the National Library Board Singapore, and the British Library. We are also aware of and example in the collection at Princeton University.

Very good. Light wear along original fold lines. Light toning. Blank on verso.
Looking for a high-resolution scan of this?