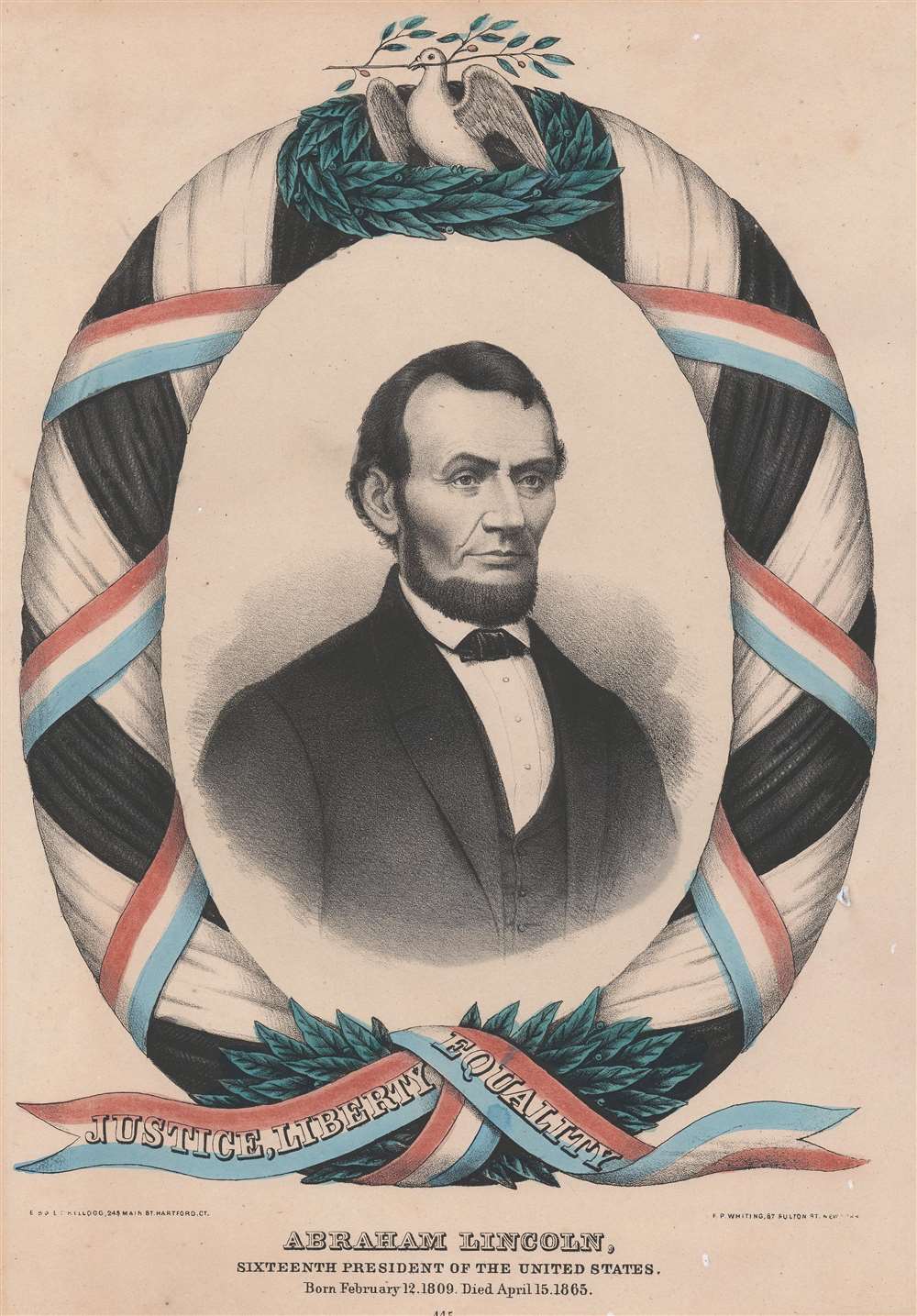 Memorializing Abraham Lincoln not long after his assassination.
$700.00

This is a c. 1866 E.B. and E.C. Kellogg memorial portrait of President Abraham Lincoln - published shortly after his death. A portrait of the slain president occupies the center and is surrounded by a wreath wrapped with a red, white, and blue ribbon. A dove with an olive branch of peace tops the wreath. The words 'Justice, Liberty, Equality' are inscribed on a second red, white, and blue ribbon on the bottom of the wreath. The text at the bottom of the wreath reads, 'Abraham Lincoln, Sixteenth President of the United States. Born February 12, 1809. Died April 15, 1865.'

This portrait was published by Edmund and Elijah Kellogg and F.P. Whiting c. 1866. We note cataloged examples as being part of the collection at the Library of Congress, the Lincoln Financial Foundation Collection, and the Gilder Lehrman Institute of American History. This piece is not cataloged in OCLC.

Edmund Burke Kellogg (May 27, 1809 - March 26, 1872) was an American lithographer and printer. Born in Tolland, Connecticut, Kellogg trained as a newspaper printer and was apprenticed with Samuel Green in New London, Connecticut. Kellogg joined his probers Daniel Wright Kellogg (1807 - 1874) and Elijah Chapman Kellogg (1811 - 1881) at Daniel's firm D.W. Kellogg and Company sometime in the 1830s. Around 1836, Daniel moved west, and Edmund and Elijah took over the firm. Edmund and Elijah renamed the firm E.B. and E.C. Kellogg in 1842. This firm operated until 1848, when John C. Comstock joined the brothers and the business became Kellogg and Comstock. The partnership with Comstock lasted only until 1850, and the brothers went their separate ways. Edmund and Elijah reopened E.B. and E.C. Kellogg in 1855. Elijah's son, Charles B. Kellogg, joined the firm around 1865. Edmund and Elijah sold their interest in the firm to William H. Bulkeley (1840 - 1902) in 1867. The younger Kellogg and Bulkeley partnered to form the firm Kellogg and Bulkeley. Kellogg and Bulkeley operated until 1946, when it merged with Case, Lockwood, and Brainard to form Connecticut Printers, Inc, which is still in operation today. Learn More...


Elijah Chapman Kellogg (June 13, 1811 - December 13, 1881) was an American lithographer and engraver. Born in Tolland, Connecticut, Elijah trained as an engraver under his older brother Jarvis Griggs Kellogg (1805 - 1873). Then he joined his brother Daniel Wright Kellogg's (1807 - 1874) lithography firm D.W. Kellogg and Company. Daniel moved west in 1836, which meant Elijah and his brother Edmund Burke Kellogg (1809 - 1872) took over the firm. Elijah and Edmund renamed the firm E.B. and E.C. Kellogg in 1840, and operated that business until 1848, when John C. Comstock joined the partnership. With the addition of Comstock they renamed the firm Kellogg and Comstock, but that partnership lasted only until 1850. After the partnership with Comstock fell apart, the brothers went separate ways until 1855 when they reopened E.B. and E.C. Kellogg. Elijah's sone Charles B. Kellogg joined the firm in 1865. Elijah and Edmund sold their interest in the firm to William H. Bulkeley in 1867, and the younger Kellogg and Bulkeley formed a partnership named Kellogg and Bulkeley. This firm operated until 1946 when it merged with Case, Lockwood, and Brainard to form Connecticut Printers, Inc, which is still in operation today. Learn More...