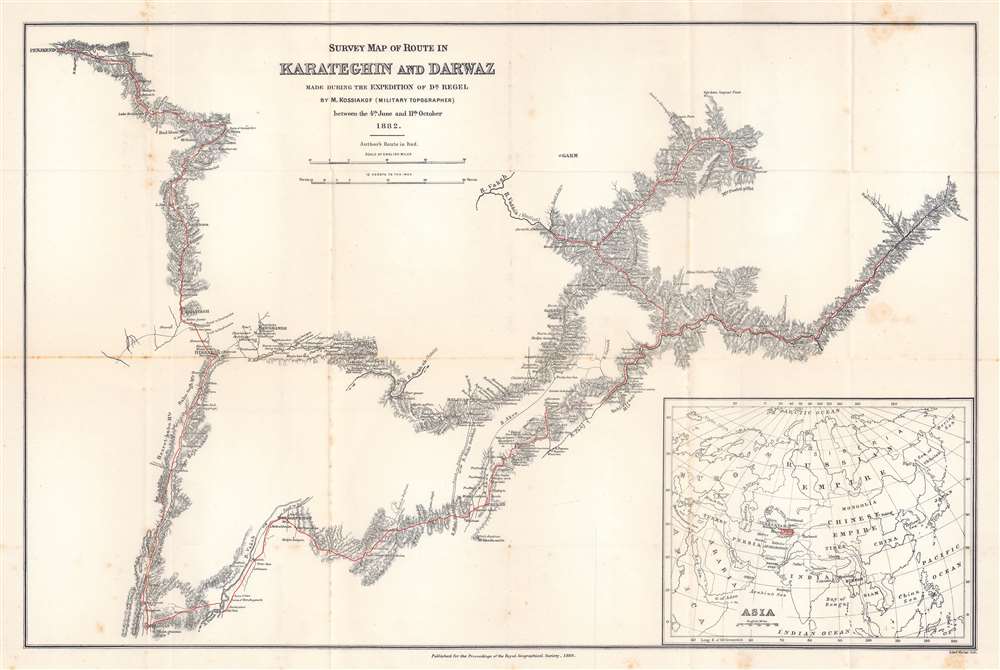 This is an 1886 M. Kossiakof map of Turkestan in Central Asia. Red lines trace Kossiakof's route through the Rasht Valley (Karateghin) and Darvaz (Darwaz) regions with the 1881 Regel Expedition. The primarily botanically focused 1881 expedition was led by Johann Albert von Regel (1845 - 1909), a Swiss-Russian physician and botanist. Nonetheless, the Regel Expedition was one of the first European penetrations into the area. Kossiakof was a military topographer attached to the mission. He mapped the region, labeling cities, towns, and villages through which the group passed. Rivers are illustrated. In the lower right corner, an inset map of Asia and eastern Europe situates the depicted area in a continental manner. The map covers only the actual path followed, along with the observable surrounds, underscoring Kossiakof's integrity in illustrating only scientifically confirmed geography.

This map was engraved by Edward Weller from Kossiakof's survey map that accompanied the original Russian article. It was published in the January 1886 edition of the Proceedings of the Royal Geographical Society and Monthly Record of Geography and accompanied E. Delmar Morgan's translation of Kossiakof's article. An example is cataloged in OCLC and is part of the institutional collection at the University of Chicago.