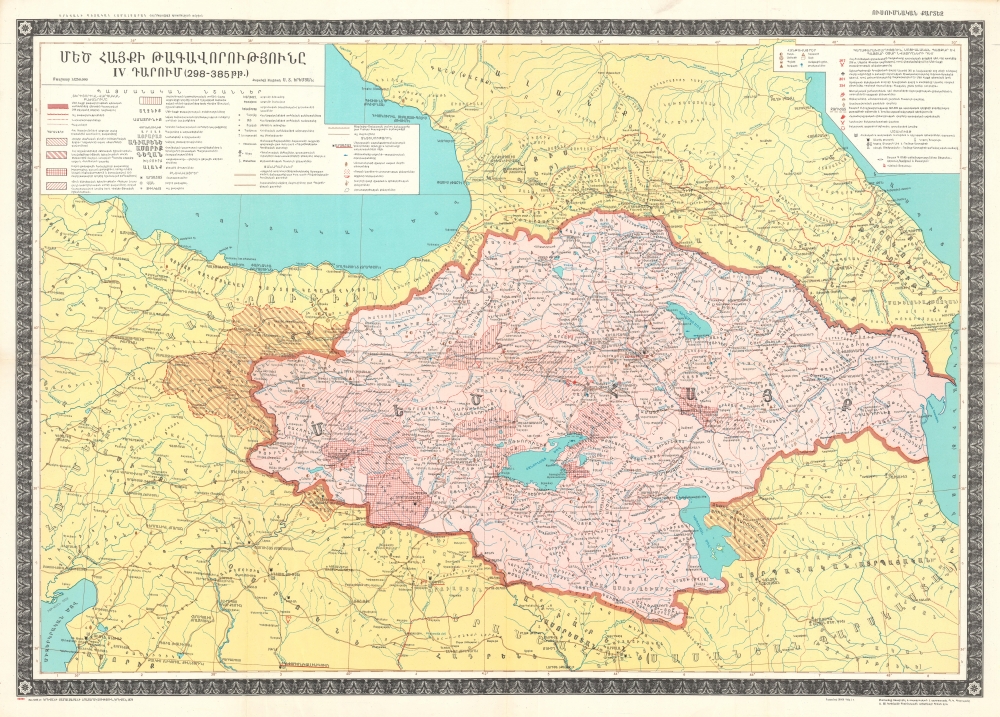 Illustrates the realm of the Arsacid Dynasty, an Armenian kingdom that occupied most of the Armenian Highlands.
$1,200.00

This is a rare separately issued 1979 Suren Yeremian map of the Armenian Kingdom of the Arsacid Dynasty during the 4th century AD published in Armenian. Stretching from eastern Anatolia to the Caspian Sea, the Arsacid Dynasty was an Armenian civilization that ruled the Armenian Highlands from 54 to 428 AD. It was during the Arsacid period that Armenia officially adopted Christianity as the state religion, becoming the first country to do so (Rome would not officially adopt Christianity until 380 AD), and Armenia has been a Christian nation ever since. Encompassing a rather large amount of territory, pink shading is used to highlight the central areas of the kingdom, while areas of orange diagonal lines mark regions that were temporarily controlled by the Arsacids. Ancient districts are labeled, as are numerous cities and towns, most of which have long since been erased by the passage of time. Mines, quarries, and wine regions (Armenia was one of the first places in the world to produce wine!) are identified. Roads and caravan routes are indicated. Important battle sites are also noted. Most of this information appears for the first time here in Yeremian's work, a compilation of decades of research done by this incredibly important historian.

This map was published by the Yerevan University Press in 1979.

Very good. Light wear along original fold lines. Exhibits loss at one fold intersection. Verso reinforcements to fold lines. Blank on verso.
Looking for a high-resolution scan of this?