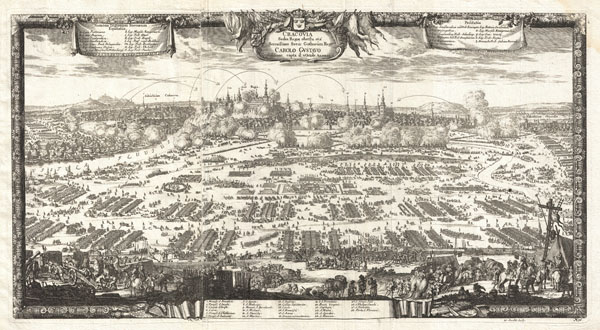 This is a rare 1697 view of Kracow (Cracow), Poland by the German historian Samuel Pufendorf. Depicts the city of Krakow at a pivotal moment in history as it resists the 1655 siege attempts of the Swedish King Carl Gustav X. Krakow appears in the distance surrounded by the encamped Swedish army. Twenty-eight notable buildings, some of which were destroyed in this siege, are identified and referenced in an index at the base of the map. This important siege was part of the Second Northern War, or the Swedish Deluge as it is known in Poland, a military campaign involving Poland, Russia, Germany, Denmark and Transylvania. This war, started by Gustav X of Sweden on the pretext of rebuffing Polish claims to the Swedish crown, was in reality an attempt to assert control of trade in the Baltic. The city of Krakow eventually fell and the Polish King fled only to regain control of his nation a few years later. Eventually Charles Gustav X returned to Sweden, having little to show for his military efforts. Gustav's son, Charles Gustav XI, commissioned the noted German historian S. Pufendorf to create a series of views commemorating the life of his father. Lavishly produced and illustrated, Pufendorf's biography is a masterful production which rarely appears outside major institutional collections

Samuel von Pufendorf (January 8, 1632 - October 13, 1694) was a German lawyer, statesman, philosopher and historian active during the central part of the 17th century. Born a commoner, Pufendorf was made a Baron in 1694, the year of his death, by King Carlo Gustav of Sweden. As a young man Pufendorf was encouraged to join the Lutheran clergy. He studied theology at Leipzig but found the dogmatism of the teachings distasteful. He turned to law, which he studied in Jena. There he developed friendships with other liberally minded intellectuals of the period. Following his formal education, Pufendorf took work as a tutor in various noble families but always managed to find the time to pursue his own researches. In time his published a substantial and influential corpus of work focusing only jurisprudence, legal philosophy, and history. Today Pufendorf is considered to be an important precursor to the German Enlightenment. Learn More...

Very good. Original fold lines. Else clean. Blank on verso. Platemark visible.
Looking for a high-resolution scan of this?