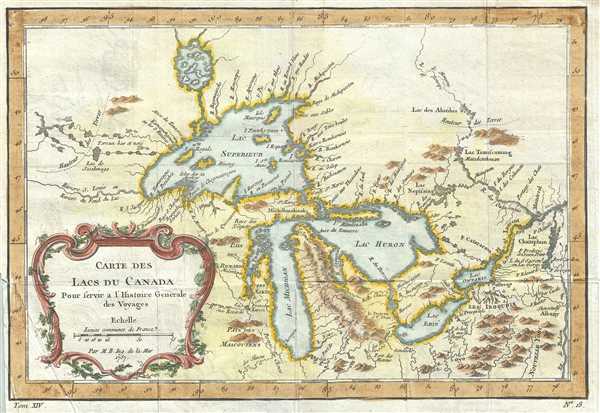 This is an important 1757 hand colored map by French cartographer Jacques-Nicholas Bellin of the Great Lakes. It covers all five of the Great Lakes as well as the adjacent Indian lands and the English colonies of Pennsylvania, New Jersey and New York. Cartographically this map is largely derived from Bellin’s important 1744 mapping of the Great Lakes and offers a number of important updates from his similar 1755 map. Preceded only by a 1742 proof noted by Kershaw, Bellin’s map was one of the first to depict the four fictive islands in Lake Superior (Philippeux, Pontchartrain, Maurepas, and St. Anne) - islands that nonetheless significantly influenced the structuring of post-Revolutionary War borders between British Canada and the fledgling United States. It is also notable for being among the earliest maps to identify Detroit and the Port of Chicago (checagou). Bellin's map covers all five Great Lakes and their adjacent drainage systems in considerable detail, noting known fortifications, American Indian villages, missions, and some speculative topography (particularly in Michigan). Modern day Lake Nipigon, sometimes referred to as the sixth Great Lake, is also included here.

Bellin based this map on the most advanced French cartographic intelligence available at the time. Most notably this map incorporates the work of the French fur trader and explorer Sieur la Verendrye and the explorer-missionary Father Pierre de Charlevoix.

From Verendrye , Bellin is able to extract a significantly advanced view, over De L'Isle, of the form of the Great Lakes and their client river systems. He also relies on Verendrye's journals with regard to the placement of numerous Indian nations and villages.

It was Charlevoix who invented the four spurious islands in Lake Superior, here noted as Philippeaux, Pontchartrain, Maurepas, and St. Anne. The islands were intended to honor Charlevoix's personal patron, the Count of Maurepas, Jean-Frederic Phelypeaux. The largest of the three islands, Philippeaux, is named directly after the count. The second largest island, Pontchartrain, refers to Phelypeaux's family estate. The third island, which may in fact be a mismapping of the factual State Islands, is named after the count's seat, Maurepas. The fourth and smallest of the islands, St. Anne, references the count's patron saint. Charlevoix described the islands as being rich in minerals leading numerous explorers to search for them in vain. Bellin dutifully introduced the four islands to his map, offered here, and such was his influence that they were subsequently copied by most subsequent cartographers, including John Mitchell in his seminal 1755 wall map of North America. The highly regarded Mitchell map was used in negotiating the 1783 Treaty of Paris that formally concluded the American Revolutionary War. Therein, the apocryphal Philippeaux was assigned as a marker for the new United States - British America border thus setting the stage, as one might image, for later political strife.

This map went through several editions, most of which saw only minor cartographic updates, but often were presented in different sizes or with different titles. The present edition was drawn by Jacques Nicolas Bellin and published as plate no. 18 in volume 9 of the 1757 French edition of Abbe Provost's L'Histoire Generale des Voyages.