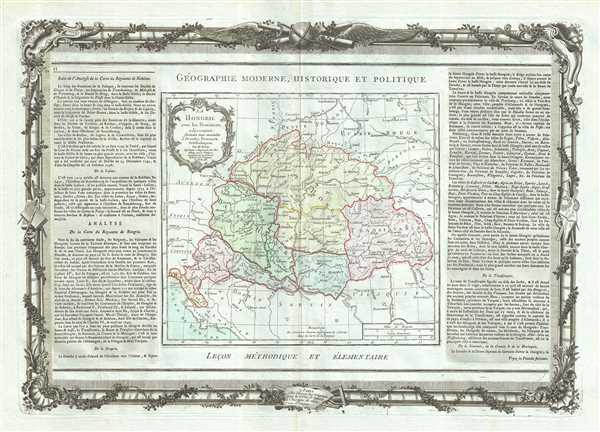 This is an attractive 1786 map of Hungary and Transylvania (modern day Romania) by French cartographer Louis Brion de la Tour. The map covers the region from the Carpathian Mountains south as far as the Danube River, including parts of modern day Hungary, Romania, Slovakia and Serbia. Renders the entire region in extraordinary detail offering both topographical and political information.

Hungary at this time was under the role of Joseph II, a dynamic leader strongly influenced by the enlightenment. Joseph shook Hungary from its malaise when he inherited the throne from his mother, Maria Theresa. In the framework of Josephinism, Joseph sought to centralize control of the empire and to rule it by decree as an enlightened despot. He refused to take the Hungarian coronation oath to avoid being constrained by Hungary's constitution. In 1781-82 Joseph issued a Patent of Toleration, followed by an edict of Tolerance which granted Protestants and Orthodox Christians full civil rights and Jews freedom of worship. He decreed that German replace Latin as the empire's official language and granted the peasants the freedom to leave their holdings, to marry, and to place their children in trades. Hungary, Slavonia, Croatia, the Military Frontier and Transylvania became a single imperial territory under one administration, called the Kingdom of Hungary or 'Lands of the Crown of St. Stephen.'

When the Hungarian nobles again refused to waive their exemption from taxation, Joseph banned imports of Hungarian manufactured goods into Austria and began a survey to prepare for imposition of a general land tax. Joseph's reforms outraged nobles and clergy of Hungary, and the peasants of country grew dissatisfied with taxes, conscription, and requisitions of supplies. Hungarians perceived Joseph's language reform as German cultural hegemony, and they reacted by insisting on the right to use their own tongue. As a result, Hungarian lesser nobles sparked a renaissance of the Hungarian language and culture, and a cult of national dance and costume flourished.

The lesser nobles questioned the loyalty of the magnates, of whom less than half were ethnic Hungarians, and even those had become French- and German-speaking courtiers. The Hungarian national reawakening subsequently triggered national revivals among the Slovak, Romanian, Serbian, and Croatian minorities within Hungary and Transylvania, who felt threatened by both German and Hungarian cultural hegemony. These national revivals later blossomed into the nationalist movements of the 19th and 20h centuries that contributed to the empire's ultimate collapse.

A beautifully engraved title cartouche adorns the top left quadrant of the map. To the left and right of the map are paste downs of French text with remarks and description of the map. Surrounding the whole is an elaborate decorative border featuring floral arrangements, surveying tools, elaborate baroque scalloping, and a winged globe. This map was issued as plate no. 35 in the most deluxe edition of Desnos’ 1786 Atlas General Methodique et Elementaire, Pour l’Etude de la Geographie et de l’Histoire Moderne.