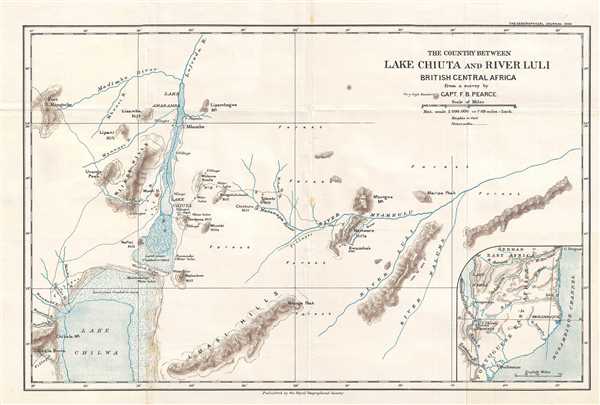 A first-hand accounting of a 'hitherto blank piece of country' created in the early 20th century.
$250.00

Depicting what Pearce calls 'the hitherto blank piece of country between Lake Chiuta and the Luli river', this is a 1900 Captain F. B. Pearce map of part of Malawi and Mozambique. Then divided between British Central Africa and Portuguese Mozambique, this map focuses on a portion of East Africa between Lake Chilwa in Malawi and the Lurio River in Mozambique. Per an article in The Geographical Journal, the map was surveyed by Pearce during a joint Anglo-Portuguese military expedition undertaken in 1899 against the slave-raiding chief Kwamba. Numerous villages are labeled throughout the region, along with hills, ridges, mountains, and forests. The flood plains of both Lake Chilwa and Lake Chiuta are illustrated, demonstrating to its viewers the vast differences between the African wet and dry season in this part of the continent. An inset map in the lower right corner situates the depicted region in East Africa in general, allowing the viewer to note that Lake Chilwa is not far from Lake Nyassa (Lake Malawi), that it borders Portuguese East Africa, and that German East Africa is not far to the north.

This map was created by Captain F. B. Pearce and printed by the Royal Geographical Society in its Geographical Journal in 1900.