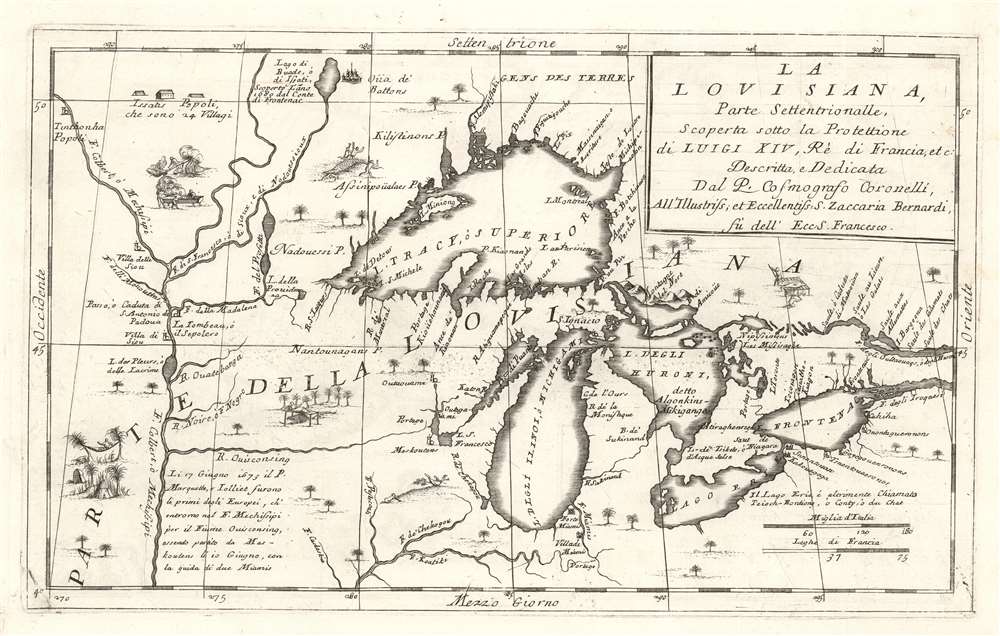 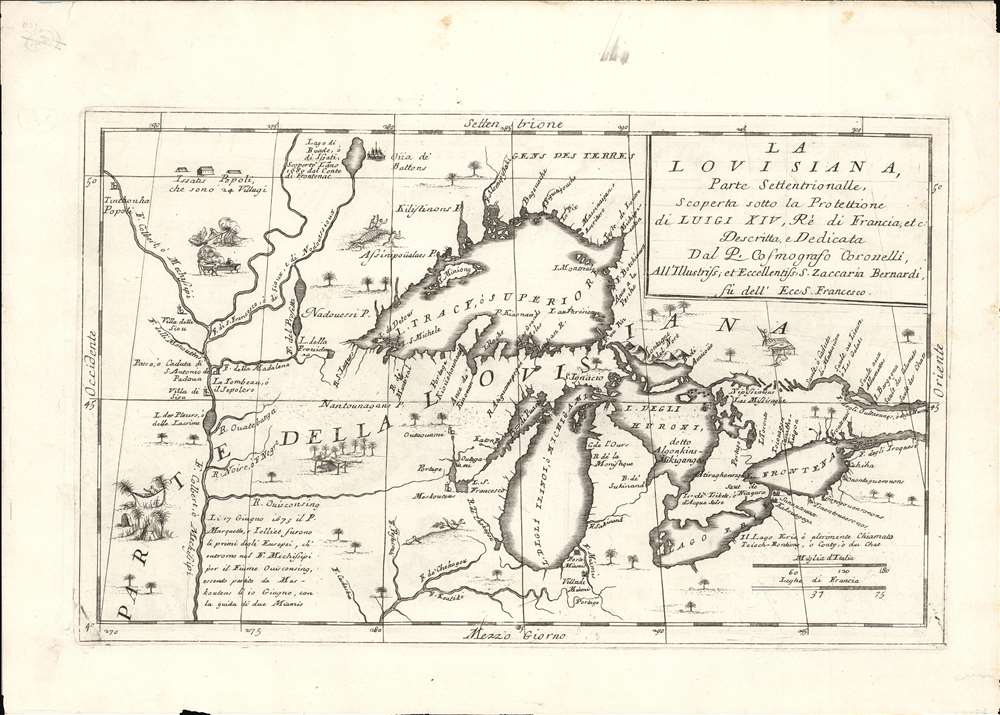 This rare 1694 production by Venetian cartographer Vincenzo Coronelli is the earliest and most important obtainable map of the Great Lakes and the headwaters of the Mississippi. Coronelli's map centers on Lake Superior, but covers all five Great Lakes and extends westward as far as the Upper Mississippi River Valley. Cartographically this map is essentially an elaboration upon the 1688 Nolin/Coronelli map, Partie Occidentale du Canada ou de la Nouvelle France. Coronelli was particularly fascinated with the Great Lakes region and this map includes numerous updates and elaborations.

Coronelli derived his cartographic information from the reports of Jesuit Missionaries, most of which were collected by Jean Baptiste-Louis Franquelin, who effectively acted as a clearing house of cartographic information flowing out of French America. The map's detail is informed by the explorations of La Salle, Hennepin, Marquette, Jolliet, Dablon, and Allouez, among others. The traces of their travels can be found throughout. Lake Ontario is named Frontenac, after the Governor of New France. On the north shore of Lake Erie, the three peninsulas are clearly visible in their third time in print (two previous though more general Coronelli publications). Fort Miami, founded by La Salle, appears at the southern tip of Lake Michigan. Various portages used by explorers and fur traders are noted throughout. Coronelli identifies the R. De Chekagou roughly where Chicago is today, as well as a portage to the F. de Chekogou just to the southwest This is also the most accurate early mapping of Lake Superior, in which both Keweenaw Peninsula (P. Kioanan) and Isle Royale (I. Miniong) are located.

Coronelli has decorated the map throughout with numerous wonderful vignettes depicting the day-to-day lives of American Indians. One in particular, a crocodile eating a man, is interesting and incongruous.

This map was prepared for inclusion in the second edition of Coronelli's important 1695 Atlante Veneto. It is derived from the more general 1688 Nolin/Coronelli map, Partie Occidentale du Canada ou de la Nouvelle France. No map of comparable quality of the region would be produced until the Charlevoix/Bellin map of 1744. This is a keystone map for any Great Lakes collection.