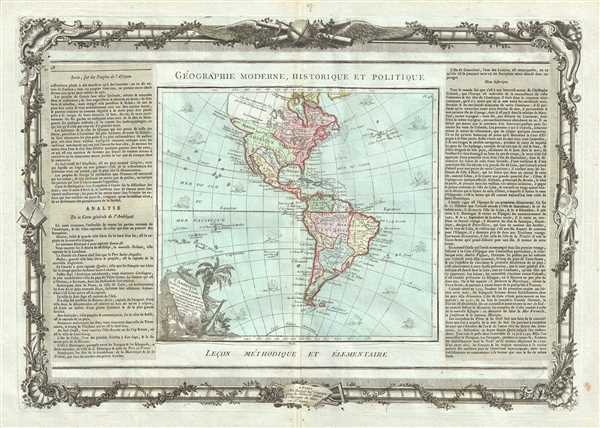 An early, speculative mapping of the western hemisphere.
$350.00

A hard to find 1786 map of the North America and South America by French cartographer Louis Brion de la Tour. Depicts the whole of North and South America with several interesting cartographic features. The American northwest is largely ill defined though highly suggestive of the French conception of a water route through North America. The region of the Apache American Indian tribe is noted and the Pacific Northwest is labeled 'Albion.' Texas is labeled 'Nouvelle Mexique' and shows as distinct from Mexico or 'Nouvelle Espagne.'

The cartography of North America, particularly the pre-Cook northwest is speculative and indistinct. The cartographer hints at a Northwest Passage via the lake and river systems extending westward from the St. Lawrence, through the Great Lakes, to Lake Winnipeg and the Lake of the Woods. Though the westwards passage is incomplete, a suggestive open inlet does appear just north of Cape Mendocino. This variant on the Northwest Passage was the great unrealized hope of the French Empire in North America, who unlike the Spanish to the south, had no easy access to the trade riches of the Pacific.

In South America, Bogata is located in 'Terre Ferme' and some early colonial cities such as Cuzco, Lima, and La Paz are noted. The Orinoco, Amazon and La Plata river systems penetrate deeply into the continent, but exhibit none of the vast network of tributaries for which they are best known. The Rio de La Plata terminates at the Lac Xarayes, a mythical lake often associated with legends of the Earthly Paradise and El Dorado, but in fact simply a misinterpretation of the Pantanal during its annual inundation.

A beautifully engraved title cartouche adorns the bottom left quadrant of the map. Sixteen sailing ships decorate the oceans. To the left and right of the map are paste downs of French text with remarks and description of the map. Surrounding the whole is an elaborate decorative border featuring floral arrangements, surveying tools, elaborate baroque scalloping, and a winged globe. This map was issued as plate no. 48 in the most deluxe edition of Desnos’ 1786 Atlas General Methodique et Elementaire, Pour l’Etude de la Geographie et de l’Histoire Moderne.