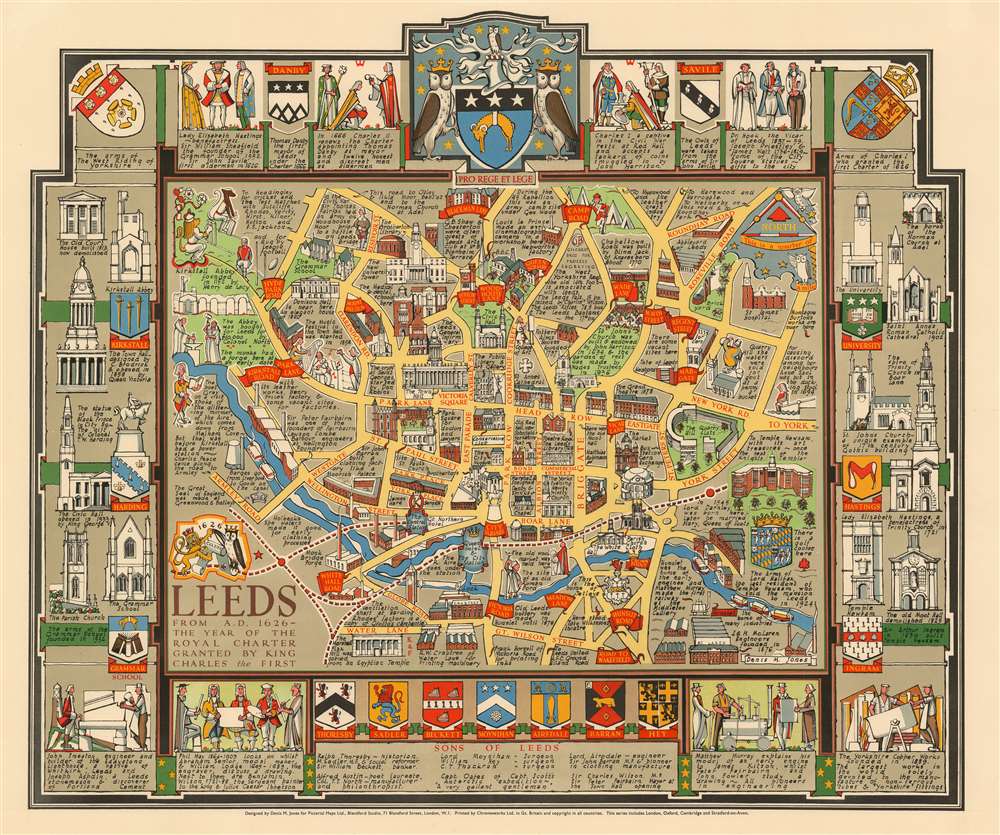 A rare and stunning 1948 pictorial map of Leeds, England by the architect and artist Denis M. Jones. This is probably Jones' first pictorial map, it covers Jones' hometown of Leeds from Water Lane and Great Wilson Street to Blackman Lane and Rondhay Road. Important buildings are rendered in profile with the Civic Hall at center. The River Aire appears prominently at center. The map is surrounded by heralding imagery and the profiles of important Leeds buildings. The armorial crest of the city of Leeds appears at top center.

The map was drawn by Denis M. Jones during a brief period following World War II when he lived in London with the pictorial mapmaker and publisher Kerry Lee. The map was published c. 1948 by Lee's company, Pictorial Maps Ltd. It was printed in Great Britain by Chromoworks Ltd. This is part of a series of pictorial maps, most by Lee, depicting English cities.

Compared to other maps issued by Pictorial Maps Ltd. this map appears to be extremely rare, with only 2 other examples known, one owned by Roderick Barron, the other by the collector David Rumsey. There are no recorded institutional holdings.

Kerry Ernest Lee (December 4, 1902 - February, 1988) was a British commercial illustrator, artist, and publisher of pictorial maps active in the middle part of the 20th century. Lee was the founder of the London based Pictorial Maps Ltd. He was born in West Ham, Essex, England. Lee's earliest pictorial map work dates to about 1940, when he produced a pictorial map of Scandinavia During World War II, Lee was one of several artist who created dramatic military-educational cut-away images of German aircraft and war maps for the Air Intelligence branch of MI6, A.I.2. After the war, in 1946, he founded Pictorial Maps Ltd. to publish a series of historical and pictorial maps of popular English cities, among them Oxford, Cambridge, London, Stratford-upon-Avon, Birmingham, and Liverpool. He included comic self-portraits illustrating he and his dog Jim in many of the maps. The images proved popular and many were reprinted for sale in the United States by the Travel Association. The firm also employed other artists, including Denis M. Jones. Lee died in Dacorum, Hertfordshire, England. Learn More...