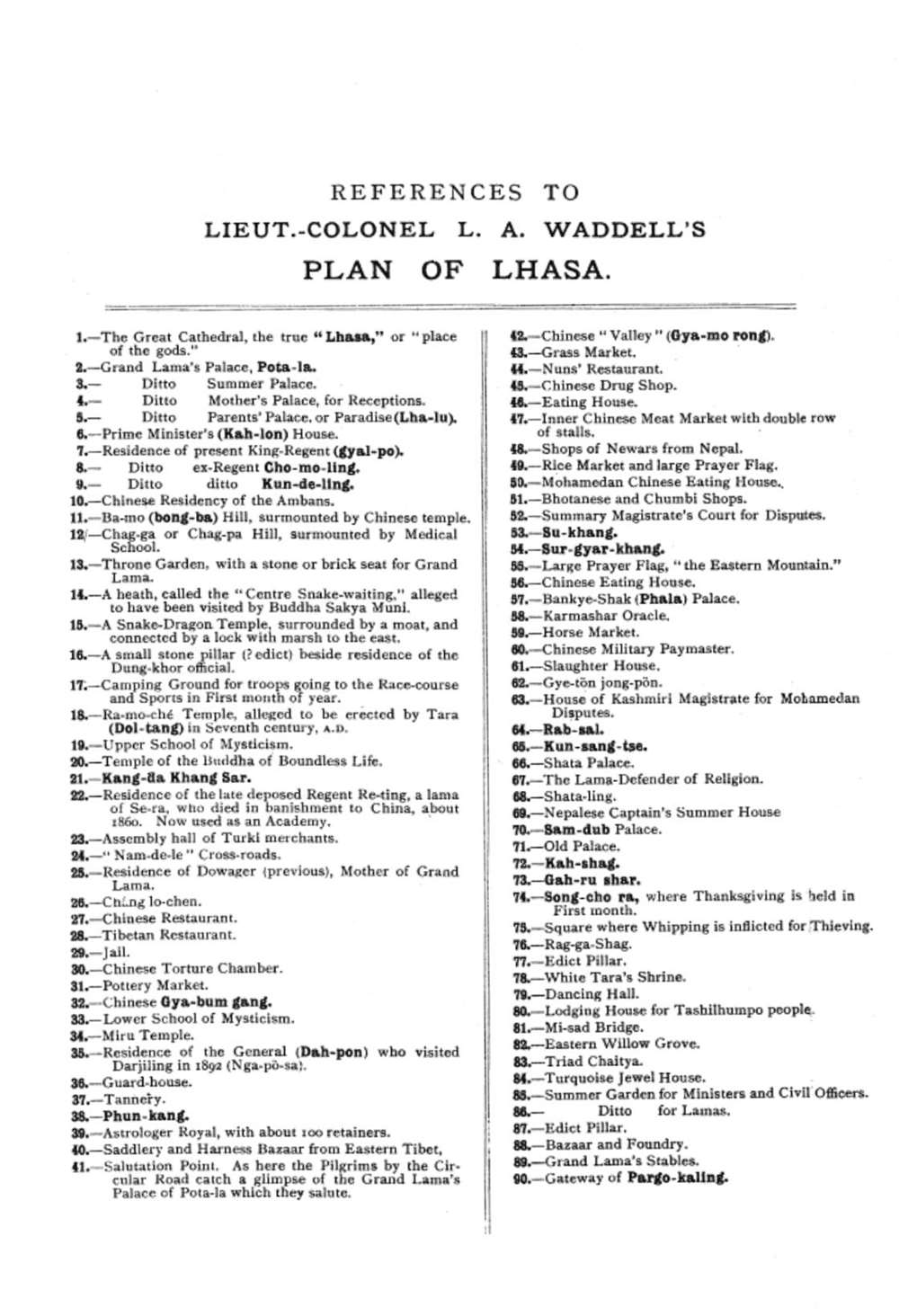 This is a 1904 Laurence Austine Waddell city map or plan of Lhasa, Tibet, created during the 1903 - 1904 British Expedition to Tibet. Likely the earliest detailed plan of the city available outside of Tibet, numerous locations are identified, including bridges, walls, cathedrals, restaurants, and theaters. Markets, including the mule market, the horse market, and the meat market, are noted. Waddell differentiates between Nepalese, Bhutanese, and Chinese shops, and also includes two 'pleasure gardens', and even specifies the Lama's pleasure garden. Another note describes the cemetery as 'infested by dogs.' Ninety locations are numerically identified, but unfortunately, the index has been lost. We have included a screenshot of the index that we located online, but this is not included with the map. An inset map situated in the upper right corner the environs of Lhasa and identifies monasteries, cathedrals, and parade grounds.

The British Expedition to Tibet exemplified the British paranoia surrounding the Russian Empire at the end of the 19th century and in the early years of the 20th century. Historian Charles Allen called the official reasons for the expedition (read: invasion) 'almost entirely bogus.' Britain, which was extremely possessive of its 'crown jewel' colony (India), saw in the Russians an ever-present threat to their. When a rumor reached Calcutta that the Tibetans were considering a protective alliance with Russia, alarm bells went off both in India and back in Britain. The British viewed the possibility of one of the 'neutral' buffer states surrounding India becoming part of the Russian sphere of influence highly undesirable. Lord Curzon, then the head of the British India government, immediately sent requests for Chinese intervention and demand Tibet sign treaties with the British. When it became clear that the Chinese held no sway in Lhasa, the British elected to send an 'expedition' of 3,000 armed soldiers to extract an agreement. In an all-too-familiar colonial war, the British significantly outgunned the Tibetans and slaughtered thousands. During the British advance toward Lhasa, they destroyed the 14th-century Tsechen Monastery and significantly damaged the Gyantse Dzong. In the end, the British succeeded in extracting the A1904 Anglo-Tibetan Treaty of Lhasa, which allowed the British to trade in three Tibetan cities, forced Tibet to pay a large indemnity, formalized the Sikkim-Tibet border, and declared that Tibet would not have relations with any other foreign powers, which effectively turning Tibet into a British protectorate.

This map was created by Laurence Austine Waddell while he was serving in Tibet with the British expedition and was subsequently published in the March 1904 edition of The Geographical Journal. One example is cataloged in OCLC and is part of the collection at the University of Chicago.

Laurence Austine Waddell (May 29, 1854 - 1938) was a Scottish explorer, Indian Army surgeon, Professor of Chemistry and Pathology, Professor of Tibetan, amateur archaeologist, and collector of Tibet. Some regard him as the real-life inspiration behind Indiana Jones. Waddell, born to Reverend Thomas Clement Waddell, a Doctor of Divinity at Glasgow University and Jean Chapman, earned his bachelor's degree in Medicine from Glasgow University before immediately entering graduate school and obtaining a Master's degree in both Surgery and Chemistry from Glasgow University in 1878. After graduating, Waddell found a job as a resident surgeon near Glasgow University and was President of Glasgow University's Medical Society. He joined the British Indian Army in 1880 and served as a medical officer in the Indian Medical Service and was subsequently stationed in India, Tibet, China, and Burma. By 1881 Waddell was a Professor of Chemistry and Pathology at the Medical College in Kolkata, a position he held for six years. He also taught himself Sanskrit while serving in India, edited the Indian Medical Gazette, and became Assistant Sanitary Commissioner. Waddell took part in the 1885 - 1887 British expedition that annexed Upper Burma after defeating Thibaw Min. He returned to India in 1887 and was stationed in the Darjeeling district, where he was named Principal Medical Officer in 1888. During his time in India he published essays on medicine and zoology, and established that Agam Kuantans in Patna was part of Ashoka's Hell. He earned a doctorate in law in 1895. While stations in Darjeeling, Waddell learned Tibet and even secretly visited Tibet several times while in disguise. He served in China during the Boxer Rebellion (1898 - 1901) and was part oof the Relief of Peking in 1900. During the 1903 - 1904 British Invasion of Tibet led by Colonel Sir Francis Edward Younghusband, Waddell served as the cultural consultant and was considered one of the foremost authorities on Tibet and Tibetan Buddhism. In his spare time, Waddell studied archaeology and ethnology. Because of his decades-long fascination with Buddhism, Waddell became a specialist in Buddhist antiquities and an avid collector of them. He returned to England around 1905 and was Professor of Tibetan at the University College of London from 1906 until 1908. Waddell retired in 1917, and devoted himself to writing about Aryans. During the 1920s, Waddell's 'scholarship' attempted to prove Aryan origin of the alphabet, as well as the appearance of Indo-European myth figures in ancient Near Eastern mythologies. Learn More...

Waddell, 'Map of Lhasa and its Environs,' The Geographical Journal Vol. 23, No. 3 (London: Royal Geographical Society) 1904.