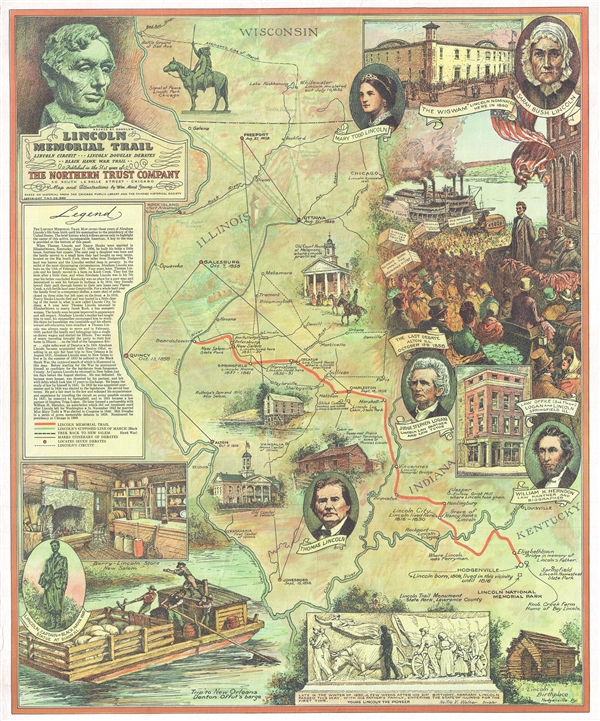 Unusual and rare pictorial map illustrating the life and times of Abraham Lincoln.

A rare 1940 pictorial map of Illinois by William Mark Young illustrating the travels and life of Abraham Lincoln. The map covers from Wisconsin's Bad Axe River to the confluence of the Ohio and Mississippi Rivers and Quincy, Illinois to Louisville, Kentucky. The map was compiled from records at the Chicago Public Library and at the Chicago Historical Society. As described in the map's legend,

The Lincoln Trail Map covers those years of Abraham Lincoln's life from birth until his nomination to the presidency of the United States.

The whole is lavishly illustrated. There are five portraits, including Mary Todd Lincoln, Sara Bush Lincoln, Judge Stephen Logan (Lincoln's Law Partner), Thomas Lincoln, and William H. Herndon (Lincoln's biographer). In addition there are vignette illustrations Lincoln's legendary log cabin, Rutledge Dam and Mill, the Berry Lincoln Store in Ne Salem, and the Old Court House in Metamora. Larger illustrations in the upper left focus on the last Lincoln-Douglass debate in Alton Illinois before the presidential election, and in the lower left, a rafting trip to New Orleans.

William Mark Young compiled this map at the behest of the Northern Trust Company to celebrate that organization's 51st year in operation. The Northern Trust contracted Young to illustrate a map/poster for some, but not all, if its anniversaries. This map may have been printed by Ralph Henry Gabriel of Yale University Press.

William Mark Young (March 18, 1881 – January 1, 1946) was an American etching artist, muralist, and commercial draughtsman active in Chicago during the first half of the 20th century. Young was born in Upper Alton, where he attended Upper Alton High School before moving on to Washington University's school of fine arts in St. Louis. His first business venture was a commercial arts firm in St. Louis. In time he moved to Chicago where his most substantial work was produced. Young is known for commercial art etching and painting, advertising, murals, and illustrations. His most impressive works were the murals issued for the Ohio Exhibit at the 1933 Chicago 'Century of Progress' World's Fair. These murals were subsequently relocated to the Ohio State Capital Building. In addition, young illustrated children's books, including a 1939 edition of Dickens' A Christmas Carol, and several books for Whitman Publishing Company in the Big Little Books and Better Little Books series. Young died on New Year's day, 1946. Learn More...