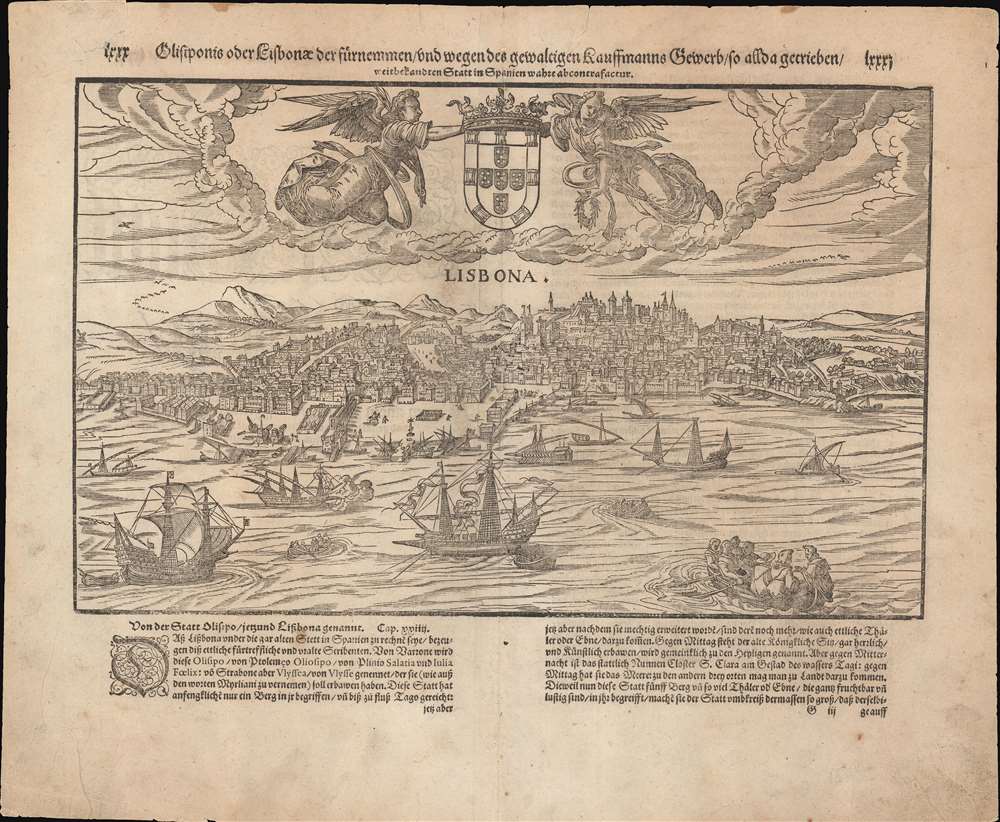 This is an attractive 1598 S. Münster woodcut view of the Portuguese city of Lisbon, one of the earliest acquirable. It displays the famous city, emphasizing the busy wharves of this essential port, and many ships coming and going. This is an example of the earliest Münster edition of this view, which is nevertheless among the last views added to Münster's work. It was printed in the 1598 German edition of Cosmographia, consequently it is one of the scarcest views from this work, having only appeared in its last three editions of 1598, 1614 and 1628.

Münster himself constantly labored to build the work until his death by plague in 1552, both adding to the text as well as ordering the production of improved city views. Sebastian Petri, the heir to Münster's printer Henrich, added many new maps and views in 1588 to bring it up to date. But this block, as well as that of London, would not appear in Cosmographia until this 1598 edition.

A disproportionate number of maps and views appeared in Münster's opus before any other publication, many of which relied on firsthand report. In this case, the view is a painstaking copy of the 1572 view engraved in copper for Braun and Hogenberg's Civitates Orbis Terrarum. It is puzzling that so important a city would be so long in coming. After all, it was one of the Iberian Peninsula's greatest ports. It was one of the largest cities in Europe during the sixteenth century. It was the starting-off point for many of the explorations upon which many of Münster's maps depended. It may be that it was neglected in Münster's lifetime due to his Germano-centric, humanist network: indeed, until this view appeared in Cosmographia there were no Iberian cities in any edition. The views and maps added after Münster's death were generally copied from the more modern works coming from Antwerp (Ortelius, mainly) and Cologne (Braun and Hogenberg), both of whom may have had superior access at this late date.

This map was cut by an unknown formschneider for inclusion the 1598 edition of Cosmographey: das ist, Beschreibung Aller Länder.... This example of the map corresponds to the 1598 printing, which was the last to employ Roman numerals in pagination. The 1614 and 1628 were pages 113 and 134, respectively, in Arabic numerals. The book is well represented in institutional collections, but this separate view appears only in three examples of the 1628 edition.

Munster, Sebastian, Cosmographey: das ist, Beschreibung Aller Länder, Herrschafften vnd fürnemesten Stetten des gantzen Erdbodens, sampt ihren Gelegenheiten, Eygenschafften, Religion, Gebräuchen, Geschichten vnd Handtierungen, [et]c., (Basel: Petri) 1598.     The Cosmographia Universalis, one of the greatest geographical and historical works of the 16th century, 'taught nearly three generations of laymen most of what they knew about the world beyond their native places' (Strauss). Filled with maps, views, and rich descriptions of places throughout Europe and beyond, it was the best general source of geographical information until the advent of Ortelius' Theatrum. It was first issued by Sebastian Munster (1488 - 1552) in its 1544 German edition, and stayed in print long after its author's death in thirty five editions, and in five languages. (Of these, the 1550 and 1552 editions are widely regarded as the most complete and truest to the author's intentions: thereafter, later editors continued to add to the work's text; editions from 1588 onwards employed an entirely different set of maps produced on Ortelius' model.) Munster's goal, initially, was to rally his homeland's humanists and scholars to produce a new map of Germany in order to 'see what kind of a land our ancestors conquered for their home... bring honor to our country and place its beauties in the clear light of day.' Munster's project quickly expanded to cover the known world in its scope to produce a 'sufficiently large volume, in which I touch upon the foundation of all nations and kingdoms, their peculiarities, rivers, mountains, customs of men, royal successions, origins of the more important cities, succinct histories, religions, characteristics and fertility of lands... in Germany, however, I tarry a little longer.'.